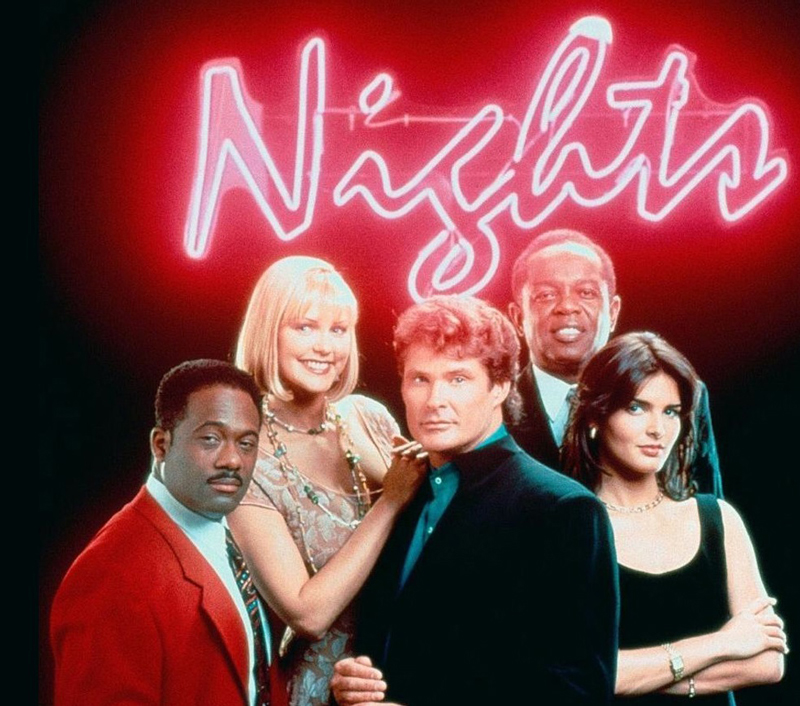 Baywatch was the number one show in the world in the 1990’s (only briefly being unseated by Renegade in 1995) and while most people are familiar with the show they tend to forget the spin-off, Baywatch Nights, and just how batshit that got.

Baywatch began on NBC in 1989 and was cancelled after a short 13 episodes. The producers refused to take this lying down and now free of the network restraints they took the series to the burgeoning First Run Syndication market which was about to enter it’s second golden age.

This turn to First Run Syndication not only opened up the possibilities in terms of nudity and flesh on display but also allowed the series to be sold internationally much easier than a network series.

In 1996, at arguably the peak of the Baywatch ratings, it was not the producers but Baywatch star David Hasselhoff who requested a spin-off series, and thus, Baywatch Nights was born.

Hasselhoff was always against the title “Baywatch Nights”… he felt that since this new show was going to be so different from the original show it should not have Baywatch in the title… producers (and more importantly distributors) disagreed.

On Baywatch, David Hasselhoff was lifeguard Mitch Buchannon heading up the Baywatch. Straight forward. Yeah, on the main show Mitch might help solve a crime or thwart a bad guy, but that was hardly his focus.

For Baywatch Nights, Mitch took on a second job as a Private Investigator because, well, of course he did. Teaming up with Baywatch cop Garner Ellerbee (Gregalan Williams) and new character Ryan McBride (Angie Harmon) to form a PI agency, Mitch was expanding. Mitch will lifeguard and solve cases at the same time… no issues here right? Their office is over the the nightclub simply titled “NIGHTS” owned by Lou Rawls (kind of playing himself). That is where the title Baywatch Nights comes from by the way… most of the first season episodes take place during the day… I guess on the days Mitch has off from life guarding.

So the two Baywatch series are running side by side (many stations running the shows back to back) and Hasselhoff is on both (Williams left Baywatch to concentrate on Baywatch Nights). There are crossovers between the series as Baywatch regulars Billy Warlock as Eddie Kramer and Yasmine Bleeth as Caroline Holden both make appearances on Baywatch Nights episodes and Angie Harmon makes an appearance on the regular Baywatch.

The first season of Nights was a very expensive cop show with the gimmick that one of the cops is a lifeguard. Each episode of Baywatch Nights cost over a million dollars which for a 1990’s syndicated series that is a lot, but to be fair you can see the money on the screen in most episodes. The bulk of season 1 episodes are standard cop show/private investigator stuff… stopping a hired killer, finding a kidnap victim, foiling a robbery, going undercover in a phone sex ring… that kind of stuff including the famous episode where Hasselhoff is staked out in front of a chicken restaurant wearing a full chicken costume resulting in a chase and fight in said costume.

Baywatch was doing it’s thing and still getting amazing ratings and Baywatch Nights... was being critically lambasted and the ratings were terrible (ironically the ratings were only terrible in relation to Baywatch, they still were huge for a First Run Syndicated series).

With disappointing ratings for season 1 when season 2 rolled around they changed the game up… and I am not kidding when I say they went batshit crazy in doing so.

Lou Rawls wanted out (and honestly he was barely in season 1 anyway) and it was decided that since season 2 would go in a “different” direction that Gregory Alan Williams would be let go as well. Eddie Cibrian and Donna D’Errico stepped up and Dorian Gregory was added to the series as their new handler. Oh did I mention that for season 2 Mitch and Ryan would be battling the supernatural while being controlled by a shadow organization pulling their strings? Yeah that is the thrust of season 2… aliens, monsters, mummys, vampires, spores from space, time travel, the devil and Mitch single handily takes down the Illuminati.

You see in 1994, The X-Files was so popular that every network wanted an X-Files clone. Most likely in a cocaine rage, it was determined that the new, new direction for Baywatch Nights would be knocking off The X-Files. By the way Mitch was still on Baywatch so he would save a drowning victim by day and by night would be helping NASA stop the shuttle from accidentally infecting the planet with alien spores from space which mutate humans or fighting a time traveling viking from destroying the city and then just go back to life guarding. Even Donna D’Errico’s character who helped them on Nights would be folded into the main Baywatch show after Nights ended with no mention ever of once punching Satan or being chased by a real werewolf once.

Alexandra Paul as Stephanie Holden and Michael Newman from Baywatch guest starred in episodes of Nights this season and the fact that Paul was DEAD in the main show makes this an odd appearance.

The new X-Files-inspired season 2 still did not fare in the ratings to where producers wanted the show to be, so with no real finale or resolution it was just cancelled, and Mitch was in Baywatch again with no mention ever of the pretty major things he did on Nights. Ryan would also never be seen again and these events never happened.

Baywatch Nights was quickly forgotten and Baywatch would continue it’s reign as the most popular show in the world with little note as to a spin-off ever having happened at all. It was not until the growth of the internet that Baywatch Nights (season 2 specifically) began to rise to the cult series status it has today. Most people never knew how off the rails it got in season 2 and still can’t believe today that season 2 really happened.

To quote one of the producers of both series “If you thought the writing was bad on Baywatch… Baywatch Nights was a new set of lows”.

Personally, I don’t think it it was not that bad as season 1 was honestly a fun (if not dopey) crime show and season 2 was amazingly insane.