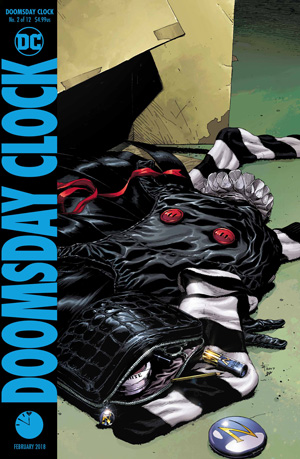 Zack Snyder’s film adaptation of Watchmen was criticized by many for being too overly faithful to Alan Moore and Dave Gibbons’ original graphic novel. I mostly agree with that assessment, but I also believe there were key elements he got wrong–not in terms of plot, but in feeling. (For instance, a movie about retired older crime fighters shouldn’t have said retirees jumping around like Neo in The Matrix.)

That’s how I feel about Doomsday Clock. The notes are correct, but the feeling is off.

The first issue of Doomsday Clock reintroduced us to the world of Watchmen, which had fallen apart since the events of that book.

Picking up from there, a dying Ozymandias and the new Rorschach escape a nuclear explosion in a dimension-hopping Owlship, along with the Marionette and the Mime, a pair of villains from their world. Adrian Veidt’s plan is revealed: he has found a way to track Dr. Manhattan across universes and hopes to find him and convince his old teammate to return and save their Earth.

Arriving in the DCU, Veidt’s plan is to contact the two smartest men on this Earth, Lex Luthor and Bruce Wayne. Neither meeting goes especially well, but Veidt’s attempt to convince Luthor goes especially sideways when a face from Adrian’s past emerges and opens fire. Meanwhile, Rorschach ignores Veidt’s cautions and touches something he shouldn’t, something belonging to a certain Caped Crusader.

I suspect this will likely read better in trade–I hope so, anyway, because right now, the DCU bits are a disorienting experience. (This I can understand, as Johns has said this book takes place a year into the future.) It’s easy to see Johns is trying to keep a sense of mystery throughout the book, but something about it rings hollow to me. Johns and Frank have kept the formatting choices of the original series–the first page on the cover, the nine-panel grid layouts, the text backmatter fleshing out the world–and have cranked up the stifling dread even as they port it over to the DCU.

But it’s still hard for me to care about any of these characters. We’re told the Mime and the Marionette are important, and even shown why in flashback. But they’re not especially engaging characters except as a sort of Watchmen reflection of the Joker and Harley. The new Rorschach and Adrian Veidt are driving the plot, but not really making an emotional connection. Perhaps part of it is Johns’ dialogue. While everyone has a unique voice, none of what they’re saying is very interesting. A robbery sequence is notable only for unnecessary profanity and a bit of gruesome violence meant to be darkly comic but mostly coming across as flat.

Then again, would I feel this way if this weren’t connected to Watchmen? It’s hard to say. Johns’ strengths as a plotter aren’t lost here–it isn’t like we’re wasting time in this issue. And Gary Frank is turning in typically fine work, although the grit may be a little too heavy.

If this were just another event book, it would be inoffensive, even fine. But you can’t really call the Watchmen comparison unfair when the book invites it.

Perhaps when it ends, we might look at this as a classic, but right now, I’m worried we have a long ten months ahead.