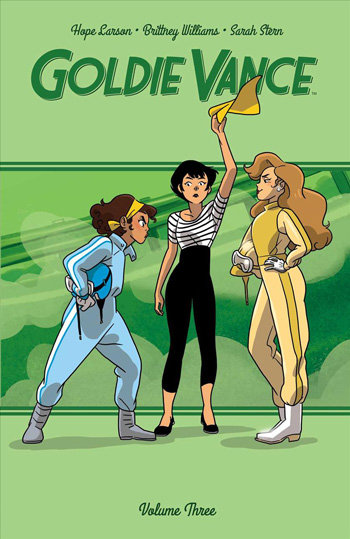 You may recall my recent review of the first two Goldie Vance graphic novel collections in which I proclaimed Goldie my new favorite person. That continues in Volume Three here, although not without a few caveats creeping in around the edges.

First a reminder that our plucky teenage heroine is a wannabe detective working at the hotel her dad manages in Florida.

Sort of Eloise meets Miami Vice. The series is set nebulously at some early 1960s point so as to avoid computers and other tech and allow Goldie to use her wits and her brain more as she Nancy Drews her way through life.

The strip is filled with rich characters, most of whom are largely ignored for this third installment. We do get a nicely rounded, life-changing portrayal of the series’ “bad girl,” Sugar Maple, and Goldie herself is still charmingly spot on but most everyone else we came to know and like from the earlier installments appears in glorified (or not so glorified) cameos.

The story this time out goes back to Goldie’s previously established love of fast cars. In order to get one for herself, she reluctantly agrees to help her longtime rival, Sugar, find out who has been sabotaging her race car.

What carries this installment is the lifelong frenemy relationship between Goldie and Sugar, with both characters actually showing moments of revelation and growth, although the denouement of the case and the plot seems a little too pat and a little too quick after the more leisurely pacing of the rest of the story.

That could be the fault of the writing, credited this time not to Eisner-winning Hope Larson as before but to Hope Larson and Jackie Ball.

Missing entirely this time out is the art of Brittney Williams. It was Williams’ art that created the perfect looks and atmosphere for the characters originally. Here we have instead, as stated on the cover, “fan-favorite artist Noah Hayes.” I’m not familiar with him at all so I don’t know what kind of art made him a fan favorite but honestly, here he seems to be trying to make his work look like the work of Brittney Williams.

And I don’t mind that for some reason. It gives this volume a continuity that would be otherwise lost. Hayes’ work here maintains the lighthearted style, the vague Manga inspiration, and most importantly the steady visual storytelling aspects of the earlier volumes.

Since my original review, it has been announced that Goldie Vance and crew are destined for an upcoming live action project so I’m sure we’ll be seeing new mysteries and adventures in book form, too, for some time to come.