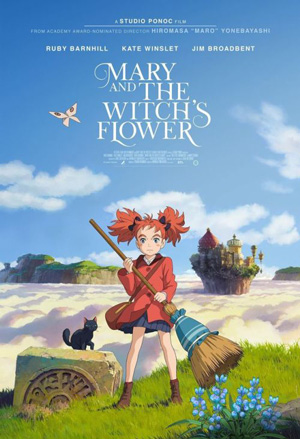 A wonderfully inventive story of girl power that’s like a blend of Kiki’s Delivery Service, The Cat Returns and Harry Potter, Mary and The Witch’s Flower may not be on the level of anime classics like Spirited Away, but it’s a very promising debut for Studio Ponoc.

It’s from director Hiromasa Yonebayashi, who was the key animator on several Miyazki films, including Spirited Away and Howl’s Moving Castle and who made his directing debut with When Marnie Was there.

His latest is a funny, eye-popping film with some terrific sequences, colorful characters, and an endearing heroine.

In this beautifully drawn tale, a young girl named Mary (voiced in the English version by The BFG‘s Ruby Barnhill) is bored silly when she has to move in with her sedate great-aunt Charlotte in a rural town. It’s a week before her new school starts and there’s absolutely nothing to do. And the first time she meets someone her own age, it’s a rude boy named Peter (Louis Ashbourne Serkis, son of Andy Serkis), who makes fun of her unruly red hair.

Things get very interesting when she follows a black cat — which appears to have turned into a gray cat — into the local woods. She soon realizes that there are, in fact, two cats, Tib and Gib, who are actually Peter’s cats. (That is, as the gardener tells her later, if cats can ever really belong to anyone.)

She also finds a glowing blue plant, the witch’s flower, which grants her magical powers. Like many classic children’s stories, the magic lasts only day, however.

That’s enough time for her (and her new familiar, black cat Tib) to be whisked away to a school for witches, where her temporary powers make her appear to be the most talented student they’ve ever met.

Since she can’t seem to do anything right in the real world, being hailed as a prodigy (and admired for her wild red hair) is the best thing that’s ever happened to Mary.

But there’s a dark side to the school and Mary finds that her one trip has set a chain of events in motion that require great heroism, loyalty and imagination to fix.

It’s hard not to evoke Harry Potter when creating a magic school, although the book this film is based on was written in 1971, long before anyone heard of J.K. Rowling. (Mary Stewart also wrote a Merlin trilogy and The Moon-Spinners, which became a 1964 Disney movie starring Hayley Mills.)

Mary’s attempts at broom riding and Tib’s constant comments (he doesn’t speak, although he always has a lot to say), provide much of the film’s humor, as does an amusing character voiced by Scottish actor Ewen Bremner.

Kate Winslet voices the school’s intimidating head mistress and Jim Broadbent is the eccentric professor with questionable ethics. Since Broadbent was also Horace Slughorn in the Harry Potter films, that can’t help but add to the Hogwarts connections.

The name of the witch’s school, by the way? Endor, surely inspired by the Biblical Witch of Endor. (And not anything George Lucas ever wrote.)