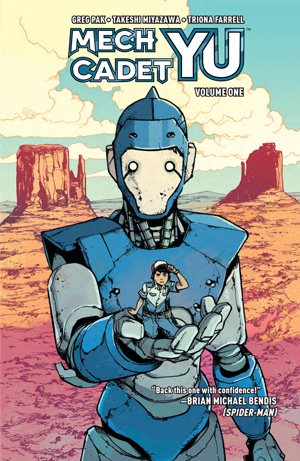 Johnny Sokko and His Flying Robot was a 1960s TV series that I probably would have loved but to the best of my knowledge it never played in my market. With the advent of the Internet, though, I have been able to catch some episodes in recent years.

The basic premise is that there’s this giant, powerful man-shaped robot that can be completely controlled by the first person whose voice it hears.

That voice turns out to belong to a little boy who, of course, uses him to help people and fight bad guys rather than take over the world. Great fun!

Mech Cadet Yu is also great fun! It’s not the same story by any means but one can trace a pretty direct line.

At the heart of this saga, we have the title character, Yu, who bonds with a giant space robot to fight aliens.

Actually, it’s a little more complex than that.

You see, years ago, a giant robomech arrived on Earth from who knows where and teamed with a young Boy Scout named Tanaka. Every four years now, a group of three new giant robots arrives on Earth and bonds with a young person.

In fact, by the time our story opens, it’s become pretty regimented in that there’s actually a military academy designed to prepare its cadets for the bonding.

Yu is not a cadet, though. Rather, he’s janitor. In fact, he’s more an apprentice janitor to his mother. But in the time-honored way of Androcles and the Lion or The Iron Giant, he helps one of the new giant robots and it chooses him rather than the cadet who trained for it!

The story then moves rapidly along as we see the training of the cadets, the return of Tanaka, the return of the giant alien monsters, and the first home grown robomech.

Paced for the long haul, though, each issue is a mostly self-contained part of a bigger story that’s only starting to reveal itself in these first four issues and Greg Pak’s writing is right on target.

Takeshi Miyazawa’s art and storytelling are not so much manga-inspired as they are anime-inspired. His robots remind me a bit also of the many robots from England’s various 2000AD series. Yu, himself, choosing to wear his old red cap even after becoming a cadet, perhaps purposely bears more than a passing resemblance to Ash from Pokémon.

Continuing the recent trend of the best comics these days coming from anyone BUT Marvel or DC, I’d say it would be tough for any reader of any age not to enjoy this series but anime fans, Iron Giant fans, and old-fashioned kaiju fans like myself will get even more out of it.