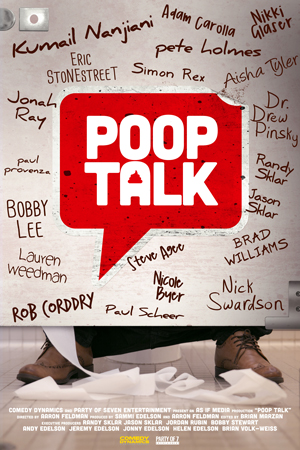 Do you enjoy poop, specifically? Come on, who doesn’t enjoy a good poop?

If you answered “yes” to one or more of the previous questions, Aaron Feldman has graced us with a little over an hour of laughter as a bunch of stand up comics tell their greatest poop stories from on and off the stage.

There isn’t a lot to say about this documentary. The stand ups seem to have lined up to participate and some of the stories are truly glorious. Brad Williams tells a story about pooping in a public bathroom that is so funny I will probably re-tell it every chance I get from now until I die. I had to pause the film I was laughing so hard. It is a brilliant story, brilliantly told.

That’s really all I can say about Poop Talk. Aaron Feldman found the right group of comedians, both male and female to spend an hour telling the camera some great stories. There are plenty of names you know. Adam Carolla, Eric Stonestreet, and Rob Corddry are the three most famous comedians involved. They also bring in Dr. Drew Pinsky to describe digestion at a couple of different moments to give a weird nod to the natural state of pooping. This is also funny, if only because it is so out of place and Dr. Drew is clearly participating with tongue firmly planted in cheek.

I love stand up comedy, so admittedly I am a soft audience for this type of content and I am a fan of some of the comedians that participated. Nikki Glaser is emerging as a favorite of mine, so I was especially happy to see her make an appearance.

There is nothing high brow about this, so don’t expect more than it will give. If you enjoy stand up comedy, stand up comedians, and potty humor I highly recommend spending about 70 minutes with this comedic documentary. If you don’t, pass.

Poop Talk will be arrive in theaters and On Demand on February 16th.