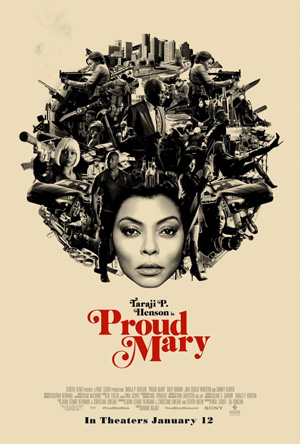 Since Sony didn’t screen Proud Mary for critics (which usually means they think they have a bomb on their hands), some friends and I paid to see it at a Friday matinee.

The verdict: It’s not great, but it’s not terrible either. The movie unfortunately squanders the rich opportunity of Taraji P. Henson as a hitwoman, but you can see hints of the killer movie it could have been.

What marketing there was for the movie, which heavily featured ’70s-era graphics and R&B music, made it seem like this was going to be an updated blaxpoitation flick, a campy modern Foxy Brown.

Alas, the use of classic songs like “Proud Mary” and “Papa Was a Rollin’ Stone” are far and few between, and so are the action sequences.

Henson makes a believable hitwoman with a hard-luck past, but the movie sells her short. I was hoping for at least a fun mix of violence and humor á la The Nice Guys, but Henson’s Mary spends more time worrying about what she’s done wrong than kicking ass. Once you realize this is not so much a movie about a badass hitwoman as it is a movie about a woman atoning for her past by adopting a child she orphaned, it’s not half-bad. But it’s not what I was hoping for.

Fortunately, Danny (Jahi Di’Allo Winston), the orphan in question, holds his own, and the scenes between him and Mary, in which continually tells him to “watch his mouth” as he casually swears, made me smile.

There are a million things to nitpick. What kind of hitwoman has her massive stash of guns stored behind a makeup mirror that you only need to brush aside to access? Where are the high-tech codes and safes? The irony is that she tells Danny that she’s in “security,” when, of course, she’s lousy at it. And when the bullet starts flying, Mary proves — conveniently enough — nearly bullet-proof.

Taking Danny under her wing sets a complicated chain of actions in motion, including a gang war between her “family,” led by Danny Glover, and a group of generic Russian villains. (Xander Berkeley sports a worse-than-Jennifer-Lawrence Russian accent as the creep who had Danny working for him as a drug runner.)

You could argue that this is a movie about overthrowing the patriarchy and anyone exploiting women and children. That’s a bit of a reach, but I admired the fierce mama bear Mary becomes. (Ripley, your “Get away from her, you BITCH” crown is still safe.)

I didn’t mind spending 88 minutes with Taraji, I just wish the movie had given her more to do.

The action sequences aren’t particularly memorable, despite being supervised by the same stunt man who did Deadpool. The movie ends up being fairly paint-by-numbers and disappointingly generic. But it’s hardly the disaster a “not screening for critics” decision implies.