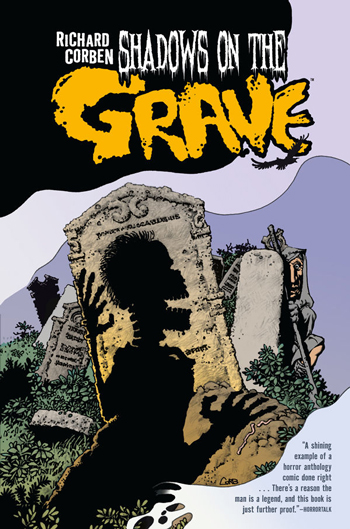 Richard Corben used to be known as “Gore” in his early underground stories.

And boy, did some of his color stories really show him living up to that “Gore” nickname!

Some of the more than 20 stories in this collection from his recent Dark Horse series, Shadows on the Grave, see the now legendary comics creator reunited with his old collaborator Jan Strnad as well as his own daughter Beth — a chip off the rotting old block — and Mike Shields, who also provides an enjoyable personal introduction.

That intro informs us that Corben, the master of color, has purposely planned these stories for black and white. This gives them at once the feel of both his own first undergrounds and of early 1960s horror television series such as Way Out!, Thriller, or Alfred Hitchcock Presents.

As on those series, you’ll find as many human monsters here as inhuman ones, although you’ll also stumble across a handful of walking corpses, supernatural beings, and ancient curses. As we see all too often in real life anymore, the things humans are capable of doing to each other make them scarier than any fictional monsters ever.

“Disturbing” is the best word to describe Corben at any phase in his long career. Shadows on the Grave is definitely disturbing. The book is best read in a well-lit room. You can do it one story at a time but that will just draw out the uneasy feeling that you get right from the very first story. I suggest instead reading them all in one sitting…early in the day. Get it over with and hope you can survive the nightmares you get.

There have been a lot of good horror anthologies coming out again in recent years, many done up in the classic EC or Warren tradition. This dark, intense collection from Richard Corben’s Shadows on the Grave is (chopped off) heads above most of them. If you’re at all a horror fan, you’re probably already reading Corben’s new stories. If not, though…