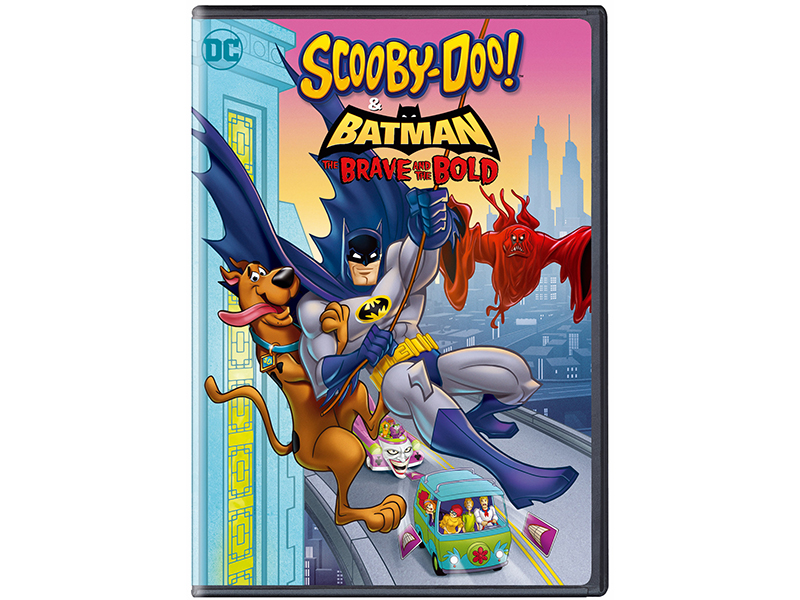 Zoinks! Boy, am I glad one of my favorite iterations of The Bat is back on my TV screen, even if he’s caught up with some meddling kids! That’s right, Batman: Brave and The Bold has been revived for a crossover with Scooby-Doo. Who out there can forget our childhood team-ups in The New Scooby-Doo Movies: “The Dynamic Scooby Doo Affair” and “The Caped Crusader Caper”?

Batman: The Brave and The Bold welcomed the Mystery Inc. gang on to his show as well back in 2011 with the chaotic “Bat-Mite Presents: Batman’s Strangest Cases”! But enough of the history lesson, there are cameos here galore, Bat-Easter Eggs and more in store for you on the latest movie!

We open on an abandoned movie theatre and Mystery Inc. setting a trap for a G-G-G-ghost when Batman (Diedrich Bader) drops in on the kids! Of course this is just Bats testing their mettle under pressure.

Batman asks the Scooby and the Mystery Inc. gang to join the ‘Mystery Analysts of Gotham’ alongside Black Canary, Plastic Man, The Question, Detective Chimp and Martian Manhunter. B: TBATB favorite Aquaman (John DiMaggio) also sneaks in to the meeting with an impressive Inspector Clouseau impersonation.

Longtime Gotham policeman Harvey Bullock is also on the case with a Mike Ditka accent this time around.

As you can expect, there are lots of Scooby tropes mixed in with the Sock-O Brave and The Bold Bat-Action. We’re treated to a food fight between Shaggy & Scooby vs. Harley & Ivy at the Blackgate cafeteria that they have to eat their way out of. Fred predictably goes gaga over Black Canary, Velma (Kate Micucci) matches wits with Detective Chimp and Daphne is a whiz at word scrambles, helping to crack the big case in the end.

We’re treated also to a bizarre looking CGI Joker mobile and Brave and The Bold‘s Dick Sprang style Joker as well as Penguin, Catman and a slew of other Batman rogues from the Blackgate breakout.

This movie is fun, fun, fun and like the best BATB stories does not take itself too seriously. Merging the two universes of Bater’s take on a campy ’66 Batman with the writing on the wall to solve this mystery with Scooby and the gang is a wild ride in the Mystery Machine!

Martian Manhunter is someone that’s getting in on the snack action with Shag and Scoob while hardline Bullock is after crime and blames it on Batman. This all leads up to a third act that has all you would ever want from a Ruby-Spears production. We get an epic montage, two or three Sixth Sense reveals at the end, and Scooby being the hero with the final boss.

In a throwaway line early in the movie, Velma is trying to winnow down her choices for the biggest mystery of all — who in Gotham is The Batman? Perhaps it was the time they spent in the Batcave with the dinosaur, giant penny and purple gloves that got her wheels turning, but you will have to tune in to find out if the mystery is solved.

I sorely miss Batman: The Brave and The Bold, so this was a nice shot in the arm. Aquaman’s outrageousness, the cool Batmobile and even the appearance of some classic Batfamily characters and toys want me to start a petition! Sadly, I don’t see a renewal on the horizon but this Batman existing in the DC Animation department for full length movies is something I can sign off on.

Sure, Scooby is great and all, and he also tickles my stoner nostalgia funny bone, but just like Scooby Snacks, everything is better with Batman.

Keep your eyes peeled for more easter eggs like a certain bumbling policeman from Mayberry and the main villain’s first appearance in issue form at some point in the movie. If you are like me, watch this with a notepad out like Velma to see if you can figure out Gotham’s latest caper, Batman’s last unsolved case in Scooby-Doo! & Batman: The Brave and the Bold.

Scooby-Doo! & Batman: The Brave And The Bold
is now available on DVD and On Demand.

In this article:Batman: The Brave and the Bold, Crossover, DC Animation, Movie Review, Movies/DVD, Nostalgia, Scooby-Doo