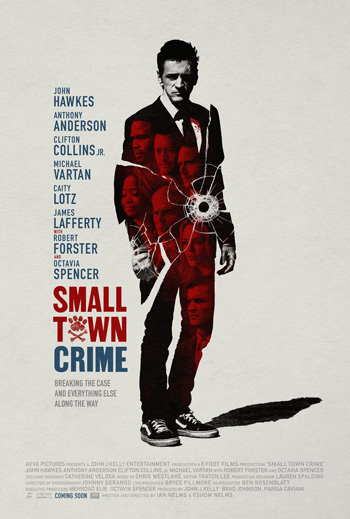 Except for not actually knowing whether anyone (including the antihero protagonist, indie stalwart John Hawkes) will make it out of the story alive, Small Town Crime by Ian and Eshom Nelms could easily be mistaken for a supersize cable TV crime noir pilot given its appropriately small-scale world-building and procedural structure (interspersed with occasional showdowns and shootouts to raise the stakes and goose the pacing).

Nowadays, of course, many actual TV shows feel downright cinematic thanks to big-screen tricks like special effects saturation, showboating offbeat POV shots, etc. — but the Nelms’ latest feature is more like an old school (if way bloodier) Rockford Files what with its straightforward plotting, arch tough guy dialogue, and enjoyable turns from a talented squad of character actors (though the all-star caliber of the ensemble and the gorgeous Utah landscape are impressive reminders of the project’s feature film pedigree).

Still, if it were a series pilot, a more appropriate title for the project would be Everybody Hates Mike, in reference to Hawkes’s alcoholic ex-cop, the kind of guy who’s universally despised by former colleagues (in the aftermath of a career-ending traffic stop gone tragically awry) and barely tolerated by even the dwindling number of people who somehow still care about him, like Kelly (co-executive producer Octavia Spencer), the sister in an adoptive family that saved him from the streets, or her sweet-natured husband (Anthony Anderson), a dive bar enthusiast who can barely keep up with Mike’s pedal-to-the-metal drinking.

Then, one bleary hungover morning while aimlessly tearing around in the broken down, souped-up black muscle car that serves as his office, home, and platonic vehicular soul mate, Mike spots a bloody young woman in a tattered fur coat half-dead on the side of the highway and latches onto the opportunity to identify and avenge her with the reckless zeal of an addict and the instincts of a natural-born investigator.

After printing up a handful of business cards, the reborn self-styled private eye quickly stumbles into a larger conspiracy while running afoul of an all-star rogue’s gallery featuring the likes of Clifton Collins, Jr., Robert Forster, and a fantastically menacing Jeremy Ratchford, each playing roles just interesting enough to make this above average B-movie worth a rental, stream, or matinee.  ‘Cause, sure:  Small Town Crime doesn’t exactly reinvent the pulp fiction wheel as it skids and screeches over well-trodden terrain.  And, yes, it treats its protagonist’s alcoholism more as a character quirk than as a serious thematic subject worthy of deeper, darker indie film exploration.  Yet given the relentless tide of contemporary A-list blockbusters featuring godlike beings threatening the universe with amorphous floods of CGI (to ever more yawn-inducing effect), it’s genuinely refreshing to see a well-constructed plot resolve itself with an unambiguously old-fashioned shootout where the life-and-death stakes are comparatively low but we actually care about the outcome.