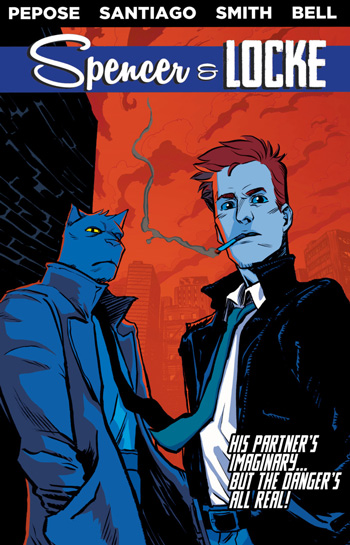 Spencer & Locke, Vol. 1, collects issues 1-4 of the comic book of the same name.

The names “Spencer” and “Locke” are taken from two philosophers, Herbert Spencer and John Locke.

You know, as in John Calvin and Thomas Hobbes. Like Calvin and Hobbes, Spencer and Locke tells the story of a little boy and the stuffed jungle cat that’s real only to his own mind.

Unlike Calvin and Hobbes, THIS version tells what happens when that boy grows up to be a police detective and his imaginary friend becomes his partner.

It’s very dark rather than funny so it isn’t a parody. It makes a point of purposely paralleling the comic strip’s specific characters and settings, though, although giving them grim and gritty turns.

If it was just a blatant rip-off, it wouldn’t make such obvious twisted homages, though. So what IS Spencer and Locke, exactly?

Well, there lies my conundrum. It’s clever, well drawn, and its creators are obviously well-versed Calvin and Hobbes fans but since this isn’t really that strip, Spencer and Locke ultimately comes across like a comedy sketch with a potentially amusing premise that’s just gone on far too long before finally grinding to a sudden halt.

Plotwise, Detective Locke is working on investigating the murder of his childhood girl next door friend. (Picture Calvin and Susie.) Along the way, he (and his “partner”) is forced to revisit old friends, old enemies, and old haunts, most of which are perverse and sometimes disturbing plays on the more innocent and familiar originals.

Spencer, the big blue panther, seems almost superfluous much of the time other than to keep reminding us of this strip’s origins. He does get one particularly good and unexpected scene with a little girl toward the end

So I didn’t hate it. But I didn’t really like it much, either. The text sections from the writer and the artist make it out to be a combination of Calvin and Hobbes and Sin City. I like both of those. Each one is uniquely wonderful. But was there really a call for any kind of combination of the two?

An interesting experiment, but I can’t really recommend it.