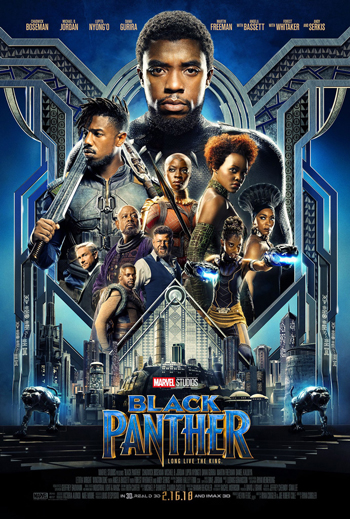 It is impossible to exist on social media and not see the importance that has been hoisted onto Black Panther. The first black superhero film of the Marvel Cinematic Universe (MCU) has been hyped since the moment Chadwick Boseman appeared as T’Challa in Captain America: Civil War. With so much to cover for a character that many have only a passing familiarity with (even with the highly publicized current comic written by Ta-Nehisi Coates of The Atlantic), it would be understandable if the film fell somewhat short of its deification.

But instead, it lives up to the worship.

For those who are completely uninitiated, you will be happy to know that a clever animated tale in the beginning of the movie sets the scene for why the fictional African nation of Wakanda has never been colonized, nor seen by the eyes of the world. From there we move to California in the 90s, setting up more backstory to show that Wakanda’s problems of Vibranium theft did not occur overnight. As long as they have something so precious, the outside world will always be a threat. That need to protect their resources, so closely tied to their heritage and way of life, permeates throughout the entire film.

The trip to America is short lived though, and that is lucky for the audience. Ryan Coogler’s interpretation of a land gifted in technology but untouched by colonialism is the first time Wakanda has been truly visualized in the MCU.

As T’Challa’s aircraft swoops into his homeland, there are none of the traditional glass and metal rectangular towers of your usual superhero film. Instead, we find innovative and diverse skyscrapers reminiscent of the modern designs in South African cities. Mixed materials and curved buildings dot the downtown where residents wear bright tribal patterns and each head sports natural styles ranging from Ramonda’s (Angela Bassett) locs to Nakia’s (Lupita Nyong’o) mini bantu knots to the sleek shaved head of Dora Milaje leader Okoye (Danai Gurira). Every set piece plays the dual role of representing the future and acknowledging tradition. Even the tricked out lab of T’Challa’s younger sister Shuri (Letitia Wright) is covered in the kind of bright neon street designs you could just as easily see spray painted across a wall in Johannesburg.

As characters switch constantly from accented English to Xhosa, (one of the official languages of South Africa), it is clear that Coogler wanted to transport the audience to a completely new world that still echoed the vibrant reality of Africa. Each time the subtitles run across the screen, we are reminded how secondary the Wakandans view the English language of outsiders. All of their world is sacred, and each tradition a source of pride. There is also a deep spirituality that permeates everything in Wakanda from the chants and posturing during the challenges for the throne to the rituals that allow them to connect with ancestors. The interactions between the various tribes show a deep respect and loyalty, but also a sense of close-knit family. Daniel Kaluuya’s W’Kabi may see T’Challa as his king, but their banter makes it feel as if they are just two good friends shooting the breeze.

Black Panther further differs from modern offerings in bringing back the kind of physicality that you might see in an early DC movie. It is reminiscent of the first few in the Batman series, with a nod to gadgets but a focus on combat.

For being the most technologically advanced country on the planet, a majority of the battle scenes depend on excellently choreographed fights that elicit a visceral reaction from the audience anytime a kick connects with a jaw, or a Vibranium spear pierces flesh. Don’t fear though, there is certainly enough CGI to make a particularly high-speed car chase go down as a showcase of Shuri’s tech savvy in Wakandan weaponry, as well as the trust-based nature of their group’s fighting style.

Each member of T’Challa’s Wakandan family shows a brilliant choice in casting. The clever and scene-stealing Wright is the perfect younger foil to Boseman’s calm and collected big brother persona. The sibling dynamic between the two of them is not just believable; it’s downright fun. The switch from bickering to the sudden intense concern that you only know if you have ever seen a sibling in trouble is seamless. Lupita Nyong’o finds another powerhouse role as Nakia, Wakandan spy and T’Challa’s love interest. We all know she is an amazing actor, but now her resume includes several stunning fight scenes with both hand-to-hand and armed scenes.

With such a fierce female cast, Michael B. Jordan’s Killmonger feels even more aggressively masculine in contrast. He is pure swagger and bravado, the child of a trauma-filled life that African-Americans are all too familiar with. This combination of anger and a thirst for radical justice makes him the antithesis to the level-headed regal grace of Boseman’s T’Challa, who has always had the benefit of love, resources, and the space to decide what is just and how to achieve it. They play well off each other, even if the dynamic is very familiar.

You’ll find that the thematic question at the heart of the film has also appeared in other MCU outings. We have seen it everywhere from post-conquering Asgard to always-hidden Themyscira: reverence of preservation of the old norms versus confrontation with the new world. Wakanda has survived for so long by practicing a stance of isolationism. As they watched European countries demolish and colonize others who looked exactly like them, they were able to modernize and excel in large part due to their policy of not getting involved. Yet as the world becomes smaller and smaller, there is a battle inside of Wakanda as well as in T’Challa regarding whether or not it is fair to turn away from the suffering of the world as it becomes more and more obvious each day. Certainly, they have the resources but the argument as to whether or not they have the responsibility is a central plot point that takes the film out of traditional comic movie territory and into a very current-feeling political and moral space.

There has never been a movie like Black Panther that so thoughtfully nods to the black experience while still being accessible to all audiences. From the sly jokes to the stunning costuming to the fierce fights, we can only hope that this cements Afrofuturism and diverse storytelling as indispensable to the cinematic world. If this is an idea of how Coogler envisions future films, there is nothing else to say but “Wakanda forever”.