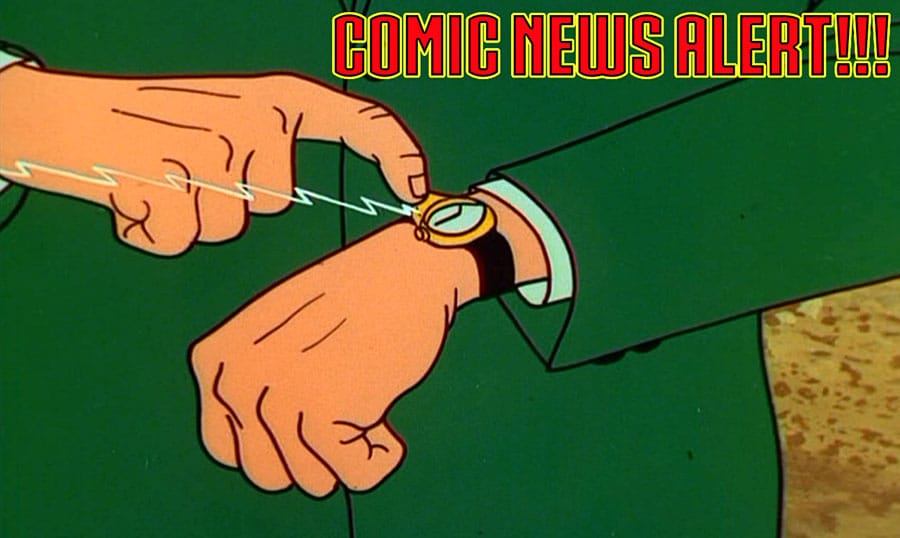 Lots of content in here, folks, so we split it over several pages. Enjoy! 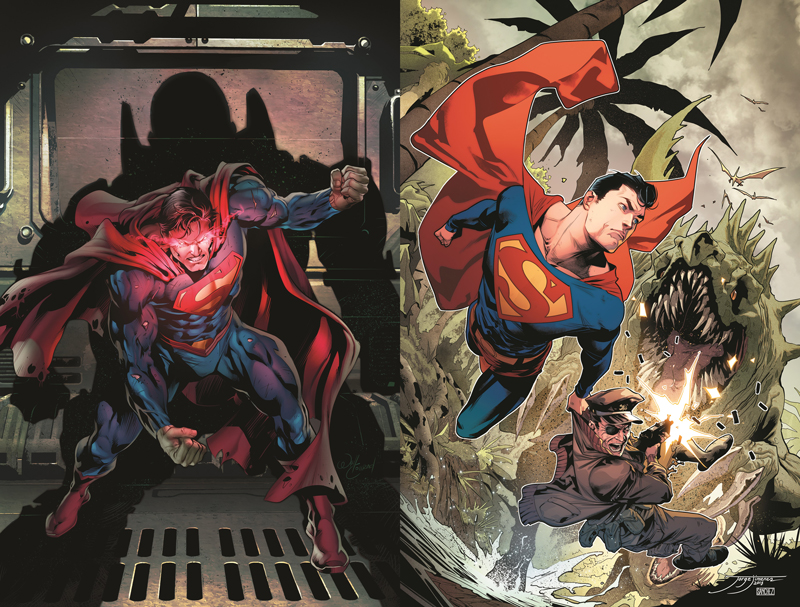 The creative talent of ACTION COMICS writer Dan Jurgens and the SUPERMAN team of Patrick Gleason and Peter J. Tomasi have brought legions of Superman fans story after story filled with action, humor, emotion and candor–traits that have continued to present Superman as an enduring symbol of hope, optimism, truth and justice. This May, the conclusions to their epic runs serve as the centerpieces of two special one-shot issues.

On sale May 2, the 48-page ACTION COMICS SPECIAL #1 features “The Last Will and Testament of Lex Luthor,” written by Jurgens with art by Will Conrad. Beginning with the events of REBIRTH, Superman’s greatest enemy became his most unexpected ally. Is Lex finally on the heroic path, or is he still hiding his true colors? When he finds himself in an adventure where Superman could be destroyed, what will he do? Save the Man of Steel, or witness his demise at the hands of an unimaginable enemy? This oversize special also includes stories from Max Landis and Francis Manapul (TRINITY, JUSTICE LEAGUE: NO JUSTICE) originally slated to appear in the DC UNIVERSE HOLIDAY SPECIAL 2017 #1, and Mark Russell (THE FLINTSTONES, EXIT STAGE LEFT: THE SNAGGLEPUSS CHRONICLES) with artist Jill Thompson (WONDER WOMAN: THE TRUE AMAZON).

Available May 16, SUPERMAN SPECIAL #1 features Tomasi and Gleason’s “The Promise,” concluding a story from REBIRTH that began in issue #8, 2016’s “Escape from Dinosaur Island.” Before Superman’s world goes through some drastic changes, he has unfinished business to attend to on Dinosaur Island. Superman and the Losers’ Captain Storm take one final trip together into the abyss of tomorrow, which brings the military man out of time into the world of today. 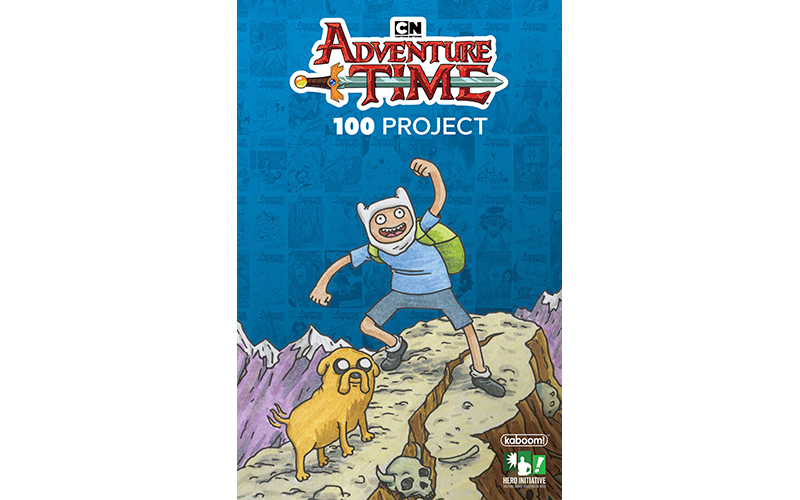 The original art from THE ADVENTURE TIME 100 PROJECT will be auctioned off beginning in on June 2nd, 2018 during a launch party event at Challengers Comics in Chicago, IL and continuing online.

“Adventure Time does that sublime job of appealing to kids and adults at the same time. It’s great to see artists who appeal to all ages lend their talents to this as well,” said Jim McLauchlin, Hero Initiative president. “Challengers does the same kind of job, with a separate-but-attached store for kids next door called Sidekicks. It’s a great venue to show off this wonderful art and have a great time.”

“It’s an honor to partner with Hero Initiative to celebrate the Adventure Time phenomenon and support such an important cause,” said Whitey Leopard, Editor, BOOM! Studios. “Every page of THE ADVENTURE TIME 100 PROJECT is a treat for long time fans and for anyone who wants to see their favorite artists draw the world of Adventure Time.” THE ADVENTURE TIME 100 PROJECT will be available for sale in May 2018. 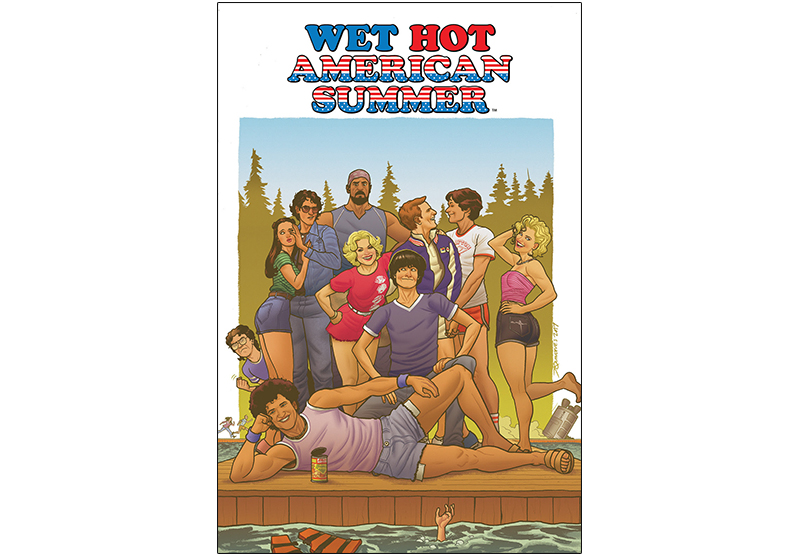 Camp Director Beth is relieved to have made it through week one of Camp Firewood in one piece…until the cops are called in for a surprise camp inspection! Now Beth, Coop, Katie, Andy, Susie, Gene, Nancy, Victor, Ben, McKinley, J.J., Gary, Gail, and the rest of Camp Firewood have 24 hours to – literally – clean up their act by bringing the camp up to code or this will be the last summer the camp is open! Luckily, the camp counselors are all onboard to pitch in…if they ever come back from partying in town.

“This is such a wonderful and unexpected crossing of my comedy nerdom, and my standard issue comic book nerdom, and I think it will be for readers as well,” said Chris Hastings. “I’ve watched the movie more times than I can count, and I also happen to be a comic book writer who for the life of me, cannot write a somber story. I’ve been looking out for new character interactions that we haven’t seen before, new things to do with spoofing camp movie culture, and I’m also bringing a lot to this from my own time working as a teen camp counselor. I cannot wait for Wet Hot fans to get to read this graphic novel.”

“I’m wildly excited to be a part of the Wet Hot American Summer original graphic novel,” said Noah Hayes. “Surreal, visual humor and vibrant, eccentric characters are some of my favorite things to work with in comics, and such a core part of WHAS itself. It’s a privilege and an honor to be on the team and I’m so psyched to bring Camp Firewood from screen to page for the first time. ”

“We’re excited to expand the world of Wet Hot American Summer,” said Chris Rosa, Associate Editor, BOOM! Studios. “Christopher, Noah, Joe and our partners at Creative Licensing and Enter These Dark Woods have created a story that will thrill longtime fans of the series but is also perfect if this is your first visit to Camp Firewood.”

“We love the BOOM! Studios guys’ work and we’re thrilled to be partnering with them on the Wet Hot graphic novel,” said Howard Bernstein, producer of the 2001 film. “ It’s exciting for us to bring to the billions of Wet Hot fans around the globe another way to enjoy the characters.” 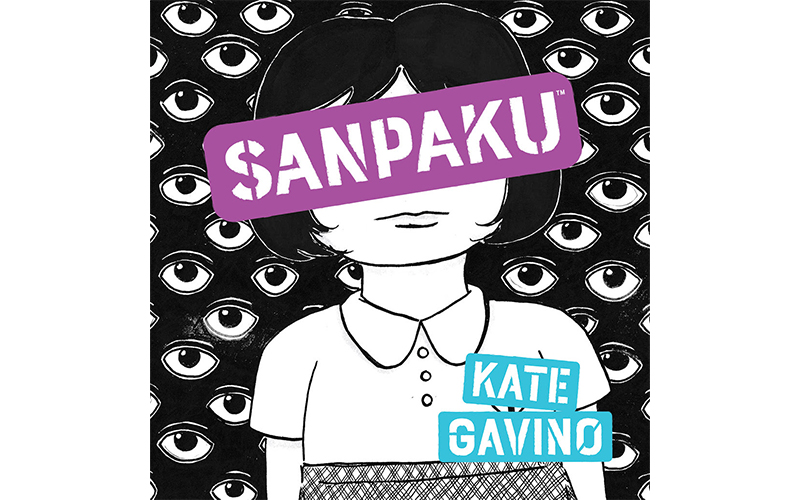 BOOM! Studios is proud to announce SANPAKU, a new original graphic novel (OGN) from cartoonist Kate Gavino (Last Night’s Reading) that gives voice to the insecurities that haunt teens of all cultures. Arriving in stores August 2018, this OGN tells the story of Marcine, a woman fascinated with the Japanese idea of Sanpaku—that seeing the white around the iris of your eyes is a bad omen. But it’s everywhere Marcine looks—her grandmother has it, some classmates at Catholic school have it, JFK had it…even Marcine might suffer from this odd condition. Eating a strict macrobiotic diet and meditating is supposed to help, but no matter how much Marcine wants it to, it can’t save her grandmother’s life or make her days at school any easier.

Packaged in a deluxe hardcover format, SANPAKU deftly explores this Japanese theory through Gavino’s own Catholic, Filipino background and weaves a powerful coming-of-age story about challenging the world around you, no matter your age, to find your true self.

“SANPAKU was inspired by my childhood in the suburbs of Houston, Texas, where I was surrounded by my classmates at a small Catholic school and my religious immigrant family,” said Gavino. “Marcine is at the point in her adolescence where she is constantly questioning what she is taught, and in effort to find something of her own to believe in, she ends up clinging to the idea of sanpaku and finding its cure. I wanted to write a book about the people I know the best: the quiet girl in class whose imagination is running at hyper-speed, the old Filipino lola who is a master shoplifter, the upright Catholic who is constantly letting herself down, and the bitchy best friend who will never forgive you for seeing her crap in the sandbox in kindergarten. SANPAKU is a look into their world, told through the eyes of Marcine, a perpetually confused twelve year-old who at the end of the day, just misses her grandma.”

SANPAKU is the latest release from BOOM! Studios’ ambitious Archaia imprint, home to graphic novels such as Mouse Guard by David Petersen; Rust by Royden Lepp; Bolivar by Sean Rubin; Jane by Aline Brosh McKenna and Ramón Pérez; and licensed series like Jim Henson’s The Power of the Dark Crystal and Jim Henson’s Labyrinth: Coronation.

“Cartoonist Kate Gavino is primed to be one of her generation’s most refreshing and honest voices in comics. Her worlds are tremendously fun and unabashedly insightful,” said Sierra Hahn, Senior Editor, BOOM! Studios. “We’re so honored to have this titles as part of the Archaia line, readers will be mesmerized by this seminal work.”