Lately in this column I have been talking about series that may be obscure to those of you younger than thirty and I have used the term “First Run Syndication” quite a bit. Being that First Run Syndication is more or less a dead method of watching television I should inform you on what it was and just why it was so innovative not to mention the two huge (but separate) booms that were caused due to First Run Syndication.

In the late 1970’s and throughout the 1980’s the cable market was really starting to make inroads into local television ratings with cables’ ability to show boobs, blood and not run commercials; this was a serious issue that local television had to deal with but if you were a small (read not network affiliate) you were mostly out of luck.

First Run Syndication was a bypass of the traditional way that a television program got on the air. First Run Syndication sold a program, not to a network, but to each station itself. You had ABC, NBC and CBS as the networks and then in just about every market you had one or two small independent stations which mostly ran old shows and perhaps some local sports. 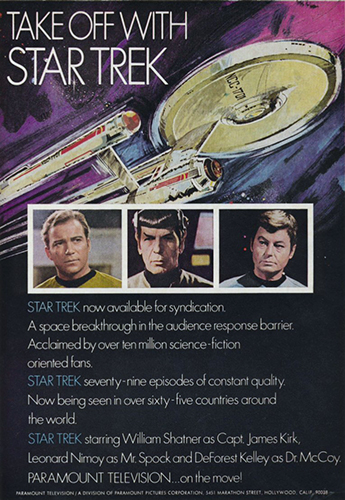 After a successful show (usually one with over 100 episodes) was off the air all of those old episodes would be sold into syndication. With syndication a station could show them when they wanted, on what days they wanted and at what time they wanted.

Many (now) classic series only became those classics due to syndication.

Star Trek for example did not blow up into the massive franchise it became until it was syndicated to your local stations five days a week.

If you are over thirty I bet you grew up watching old 1960’s sitcoms and 1970’s cop shows on some small UHF station in your area.

Cable was just coming into it’s own with HBO making original content but a viable cable programming market was still a good half decade away and FOX would not exist as the 4th major network for another few years but there was this underground movement in television that was gaining ground all the while the networks laughed it off… First Run Syndication.

With First Run Syndication and the bypass of the networks an independent station could have original, first run, programming they could use to battle the network affiliates with.

In the beginning the First Run Syndication market was small with mostly fishing shows, sports programming and talk shows eating up the runtime but there were some standout originals such as the innovative Mary Hartman, Mary Hartman and the sequel to the 1950’s One Step Beyond; The Next Step Beyond alongside British imports the likes of Space 1999 and The Prisoner. These made small dents in the networks with The Muppet Show being the strongest standout of First Run Syndication but everything changed on Halloween weekend 1983.

On Halloween weekend 1983 the pilot episode of Tales From The Darkside aired.

Nothing was the same after this. With the freedom that First Run Syndication allowed in scheduling different stations aired this pilot at different times and nights but they all aired it on the weekend of Halloween (Halloween being on a Monday that year allowed for the build up over that weekend). The ratings for the Darkside pilot astounded EVERYONE.

Beating 2 of the 3 networks in ratings and with only %40 coverage of the country contrasted to the network 100% coverage caused even the heads of the Big Three to take notice. This First Run Syndication thing might have some legs.

The following Halloween Tales From The Darkside would begin it’s first season with amazing ratings and stations begging to run the program. After this the flood gates were open. Within the next few years First Run Syndicated programming would routinely give a good ratings dent to the networks and then when FOX came on the air in 1987 this actually helped First Run Syndication even more as for that first year FOX only ran original programming two hours a night, six nights a week. Most FOX stations (formally indie channels) gobbled up the First Run Syndication shows.

There was a new wave of TV shows made without a network that followed in the wake of Tales From The Darkside. Friday The 13th The Series, Freddys Nightmares, War Of The Worlds, Star Trek: The Next Generation, Fame, The Munsters Today and Superboy were just part of a long list of TV series made to be sold direct to independent TV stations. 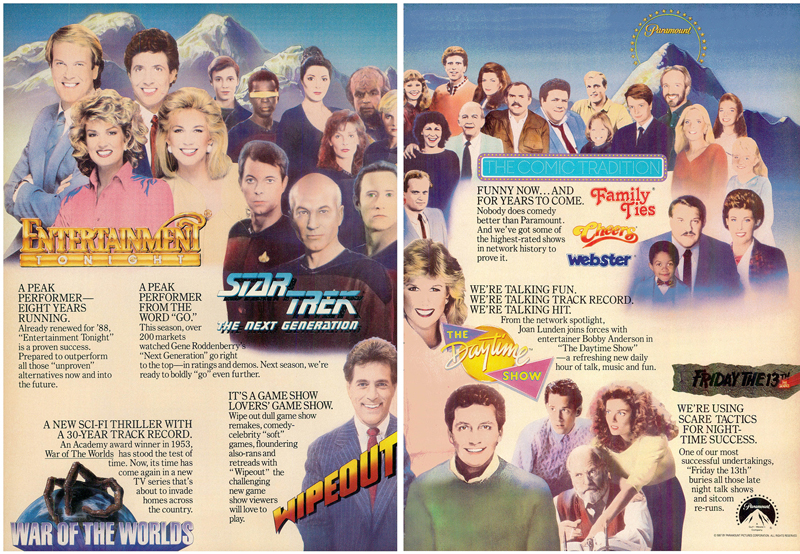 First Run Syndication had it’s downsides to be sure (being cheaper than networks series sometimes showed on the screen), though but it also had major upsides such as less studio interference, looser standards and practices and a much freer style. That style is what gave First Run Syndication it’s unique feel, these didn’t FEEL like network shows, they didn’t FEEL like anything else on at the time. Star Trek: The Next Generation is credited with creating such an impact that the networks which had previously turned down the series while in development were now clamoring for it.

These “off network series” as they were called were amazing in the ratings to the point of scaring some of the networks permanently.

Obviously, Star Trek: The Next Generation made it’s numbers, but I bet many would be surprised that Friday The 13th The Series actually BEAT Star Trek: The Next Generation in each shows second seasons. With these kinds of numbers it seemed like a new era was on the brink of exploding onto the scene… but then FOX (once the friend to the First Run Syndication market) became too large of a player.

Once FOX became a viable channel in it’s second year of broadcast the market just became too crowded. Many of the independent stations that would run the First Run Syndication programming now became FOX affiliates and with FOX programming taking over the time periods formally given to the First Run Syndication shows they were pushed into the late night slots that movies used to fill and the ratings dropped precipitously. Eventually most of these shows were cancelled after this with a few notable exceptions (Star Trek: The Next Generation being a prime example). This was the end of the first First Run Syndication boom but this idea of off network channels was too good to just let it die.

UPN would officially launch in 1995 with the premiere of Star Trek: Voyager but did you know it was attempted as early as 1990, by Universal though and not Paramount?

Universal tested the waters of a mini-network of 3 shows meant to see if this kind of thing could operate as a kind of floating channel during this period. She-Wolf Of London (later retitled to Love And Curses), They Came From Outer Space and Shades Of LA were sold as a package to stations under the banner of “Hollywood Premiere Network” with custom graphics and everything. All 3 shows failed to make it into a second season and this little experiment seemingly failed until Baywatch was cancelled by NBC and rather than take that the producers went the First Run Syndication route… and a legend was born.

Baywatch killed it in the ratings and soon other network cast-offs rolled in (21 Jumpstreet and Punky Brewster finished out their runs in First Run Syndication after being canceled by their networks) but also Forever Knight and the short lived female cop series Sirens found new life with seasons created exclusively for First Run Syndication. A second wave of First Run Syndication was born and this one would make just as large of an impact but in a different way.

With this second boom coming in under Baywatch it seemed that those floodgates opened anew with hit series Hercules: The Legendary Journeys, Xena: Warrior Princess, Highlander: The Series and Star Trek: Deep Space Nine giving the networks a severe threatening glance.

Hell, at one point Baywatch was literally THE MOST POPULAR TV SHOW IN THE WORLD being syndicated in over 40 countries and breaking records internationally… until a paint by numbers PI/Bounty Hunter show called Renegade came along and actually dethroned Baywatch for a short time.

This bolstered the money-men into trying stranger and even more niche First Run Syndicated programming. Soldier Of Fortune Inc/Special Ops Force (same show but the title changed between seasons), Viper, Space Precinct, F/X: The Series, V.I.P., Cobra, Relic Hunter, Robocop: The Series, The New WKRP In Cincinnati, Harry And The Hendersons, Time Trax, Babylon 5, Beastmaster, Earth: Final Conflict, Conan The Barbarian and even Stacy Keach returning as Mike Hammer all ran for a season or more to sate any taste, from sci-fi to action to comedy to adventure. 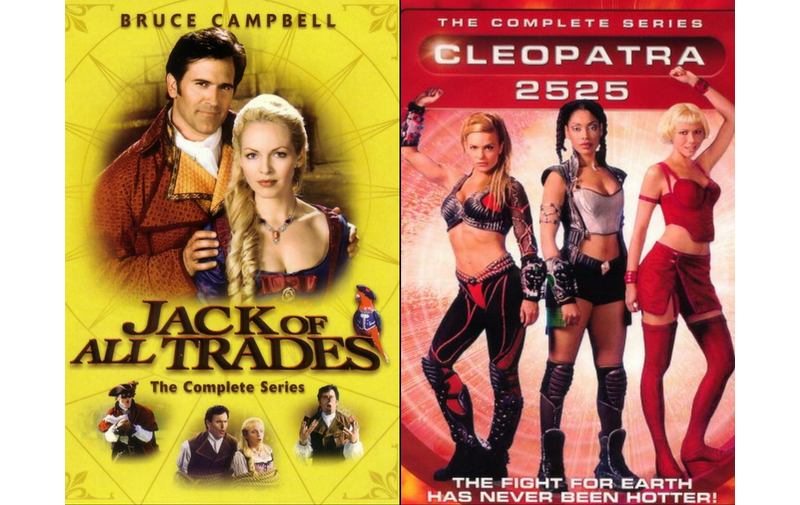 You even had the shows that no one remembers from this era such as Cleopatra 2525 and Jack Of All Trades plus pilot movies such as the incredibly fun Adventures Of Captain Zoom In Outer Space which never got picked up.

This second boom would come to an abrupt end when UPN hit the scene though… as the WB had already hurt the First Run Syndication market in the same manner as FOX a few years earlier the landing of UPN left many of these shows no place to run. Sure, the WB, UPN and FOX stations still ran some of shows, but again, late at night and the audience did not show up. It was now too crowded of a market to remain viable and then Infomercials came in and put First Run Syndication down.

If you grew up in the 1980’s or the 1990’s you will remember many of the series mentioned here but you most likely associated them with the FOX or WB affiliate you saw them on and likely didn’t notice them as First Run Syndication but First Run Syndication literally changed the face of television allowing for the cable channels to come in and pick up the pieces later on… but that is a story for another time.