After a 23 year stint in New York City, I’m now an inevitable resident of Los Angeles.

It’s always been inevitable that I’d move here. Like so many others, I’ve been obsessed with movies since I was a kid. After film-school it was either NYC or LA, and the former called first.

Though I’ve had the opportunity to move a few times before, the timing always sucked.  So, this relocation to La La Land has been a long time coming.

Business trips out West sometimes afforded time to take in the still-ongoing romantic celebration with Hollywood’s past—dinner at Dan Tana’s, screenings at the New Beverly, record bin diving at Amoeba Music in the shadow of the iconic Capitol Records building, among other musts. But now I live here, and have a car, so I’m thrilled to be able to explore on a way geekier level: seeking out past filming locations of my personal faves.

Having moved Downtown (or DTLA as its now rebranded), my first exploration came by accident. On my list of places to check out, just two blocks from my apartment, is the glorious Bradbury Building, which was most notably the home of J. F. Sebastian’s in Blade Runner. 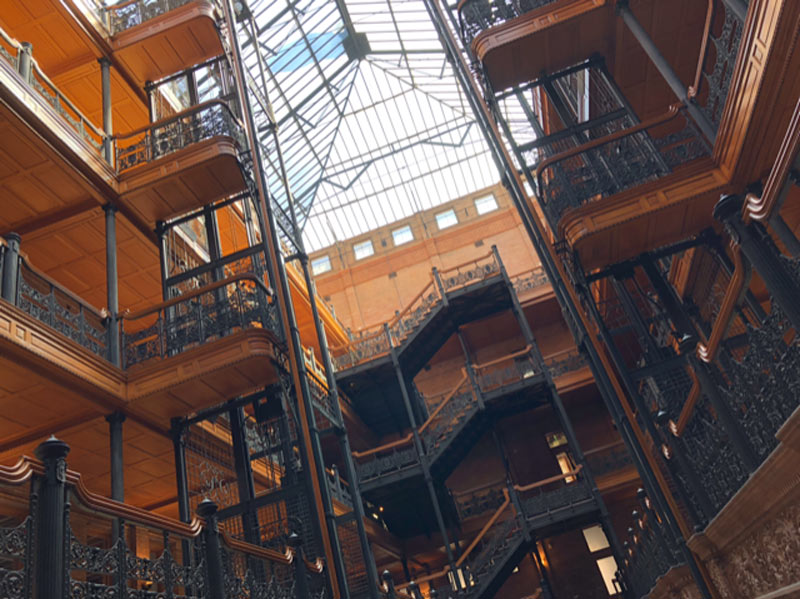 Named not for the sci-fi author, ironically, but rather the late-18th century millionaire Lewis Bradbury, the building hardly stands out on the fairly old-school corner of 3rd and Broadway. Its exterior hasn’t really changed since opening in 1893. Now an ever-increasing destination for tourists and hipsters, that particular section of Broadway is more known for its late-night bar scene and early-morning hangover remedy, Eggslut.

So, the Bradbury goes commonly unnoticed, even by those paying $4 for a coffee in its lobby’s pour-over obsessed Blue Bottle location, or the customers grabbing a combo meal in the Subway in the lobby’s other side.

That’s a shame, as the real treat of this classic office building (which still operates as such) is its interior. A through-the-door trip back 120 years is your initial reaction to the five-story lobby/court. The skylight floods natural lighting that causes periodic, changing shadows amongst its many winding staircases and iron and oak railings. Bird-cage elevators take you up to the fifth floor if you’re lucky enough to have an office here. 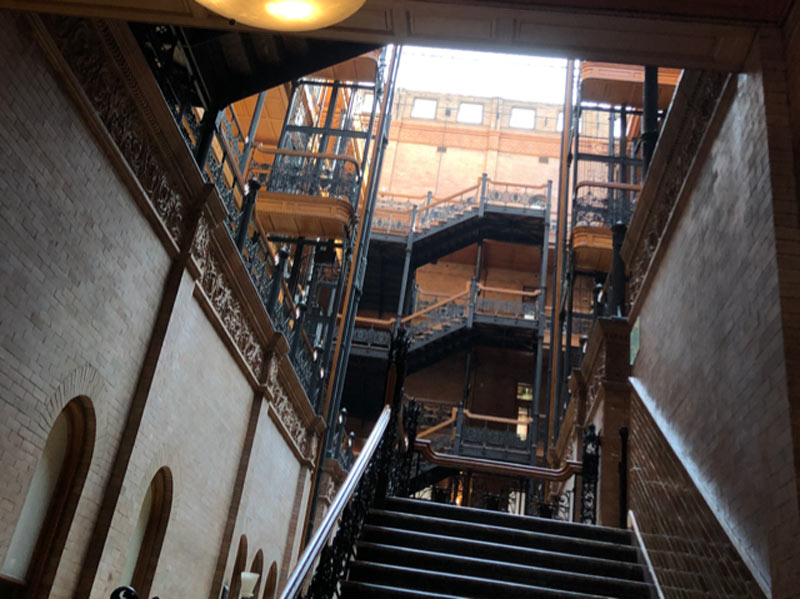 The building, during operating hours, allows tourists to enter the spectacular lobby/court, but go no higher than a staircase on the second floor. It’s still worth it, especially to marvel at the winding staircases that lead to the rooftop sequence at the end of Blade Runner. Once you get past the smell of fresh bread baking in the Subway at its Broadway side entrance, you can see Deckard chasing Roy, albeit much sunnier and less-dystopian.

A more planned bucket-list filming-location pilgrimage took me high into the Hollywood Hills, just near Griffith Park. The Ennis House, built in 1924, is a stylized Aztec inspired residential that stands out from the more conservatively designed homes its stretch. Approaching the location from below, sort-of mimics the opening title sequence of its most famous fictional counterpart—the titular House on Haunted Hill. 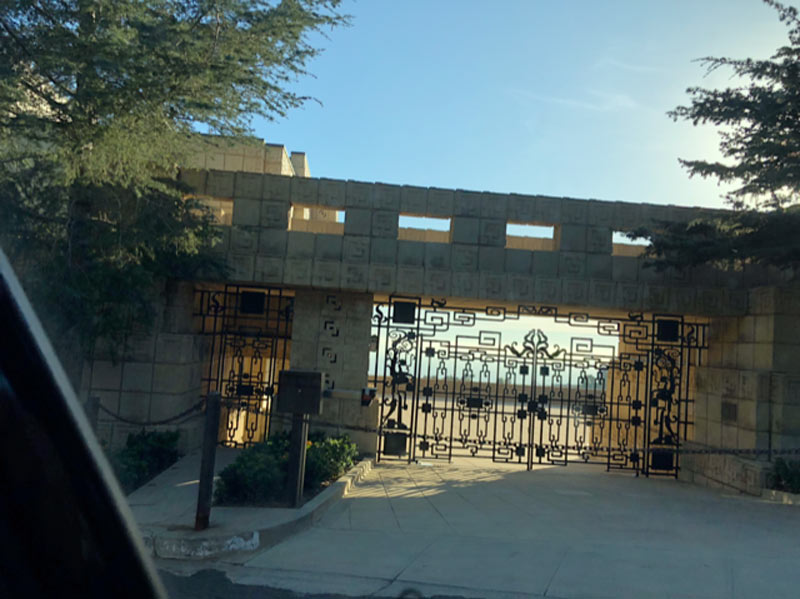 Upon reaching the destination, the creepy gated entrance is way less roomy than it appears on film. It’s still striking though, and worth the winding trip up a narrow, mind-bogglingly two-way street. Incidentally, the exterior of the house, designed by the legendary Frank Lloyd Wright, was also used for Blade Runner as Deckard’s home. His dark interior living conditions were created on a soundstage.

The iconic interlocking concrete blocks of the structure have seen better days, though it is considered a historic landmark. It suffered damage in the 1994 earthquake, but was repaired prior to its sale of a current private owner, billionaire Ronald Burkle. 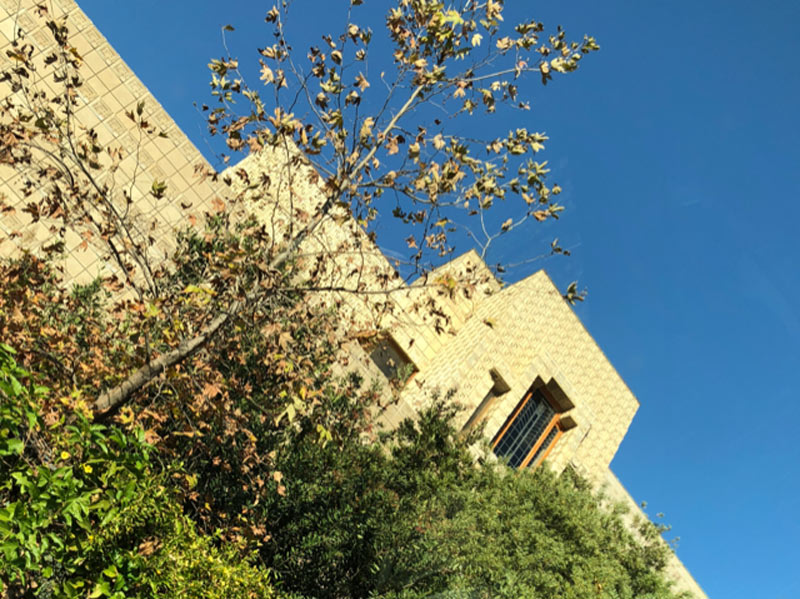 Other iconic fictional locations for the Ennis include the Buffy the Vampire Slayer series (it was Angelus, Spike and Drusilla’s Mansion), The Karate Kid Part II, Black Rain, Rush Hour, and The Replacement Killers.  Parts of the house have inspired recreated soundstage sets for Predator 2, Star Trek: The Next Generation and The Rocketeer. Tile casts from the block relief ornamentation were part of the Club SIlencio doorframe in Mulholland Drive and the show-within-the-show Invitation to Love from Twin Peaks was shot inside the house.

I will say, it was all-the-more cool to see the Ennis in person, having recently visited the Wright exhibit at MOMA, where one of those concrete blocks sits on display with the house’s blueprint.

There will be more trips to other filming locations in the future, and I plan on documenting here on Forces of Geek.