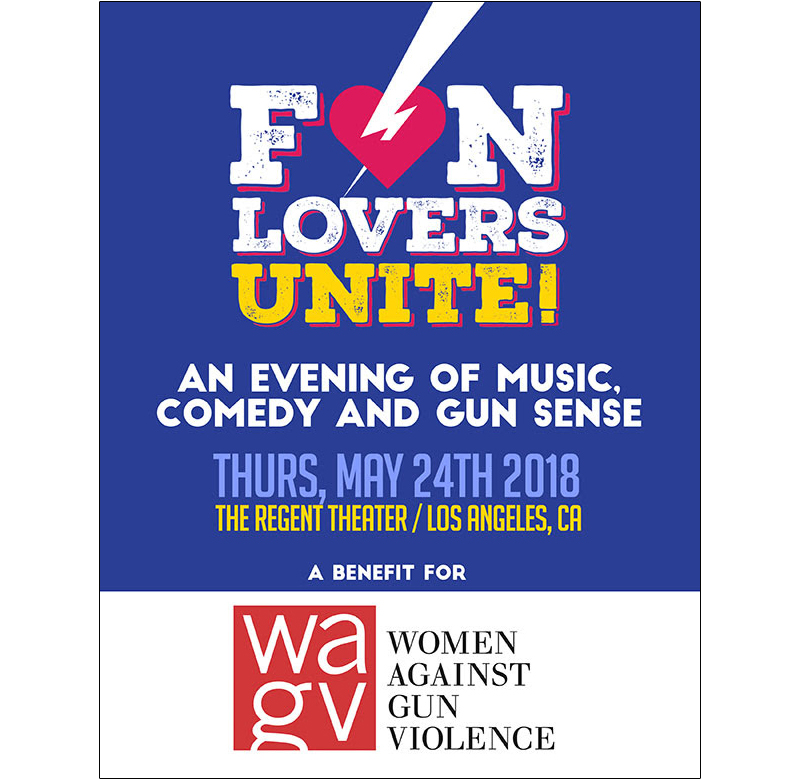 Comedians, writers, and humorists Jonathan Ames, Kurt Braunohler, Josh Gondelman, Jeanne Darst along with musician Open Mike Eagle are the first performers confirmed to appear at the third Fun Lovers Unite!  An Evening of Music, Comedy, And Gun Sense event at The Regent Theater in downtown Los Angeles on Thursday May 24. Doors open at 7PM EST and this is an all ages event. More fantastic performers will be announced soon.

Fun Lovers Unite! An Evening of Music, Comedy, And Gun Sense will benefit Women Against Gun Violence who have been working to reduce gun violence for twenty-five years, offering free educational programs and helping to pass some of the nation’s toughest gun laws. This event also celebrates and is happening on the day gun-violence victim Asher Montandon would’ve turned 50 years old. Tickets can be purchased starting this Friday at noon EST here: https://ticketf.ly/2rTHArU. We will also be offering a limited amount of free tickets for gun violence survivors via the WAGV.org website.

“The continued government inaction in the face of this series of ongoing tragedies is brutal and dispiriting, and I’m glad for any opportunity to help fight that injustice,” says Comedian Josh Gondelman. “In this case, it will be by getting onstage and talking to a room full of strangers about how cute my dog is.”

“Fun Lovers Unite is just one example of the grassroots momentum across this country calling for gun sense,” says Maccabee Montandon, co-founder of Fun Lovers Unite! “The vast majority of Americans are in favor of common sense gun laws like expanded background checks. Music and comedy are powerful ways to reach people—and my brother Asher was an obsessive fan of both art forms, so this seems like the perfect way to celebrate his 50th birthday. We are incredibly grateful to the performers who will use their talents to bring people together.”

“Many gun violence survivors spend their time testifying in support of gun laws, lobbying in DC, sharing their painful stories in the hopes it will save a life — it’s emotional and difficult work,” says Hollye Dexter, Board Member, Women Against Gun Violence. “Being able to sponsor survivors to an evening of laughter and music will be a welcome relief. We are so grateful to all the comedians and artists who have agreed to perform.”

Each performer on the bill is donating their time to this life-saving cause and is proud to stand with other fellow comedians, artists, and musicians in solidarity to raise awareness for common sense gun violence prevention efforts and the elected officials who stand up for the safety of our communities.

General Admission tickets are $25 in advance and $30 day of the event;
VIP tickets are $100 and can be purchased here: https://ticketf.ly/2rTHArU