Welcome back to Graphic Breakdown the Monday edition!

Here are some books to get your week going! 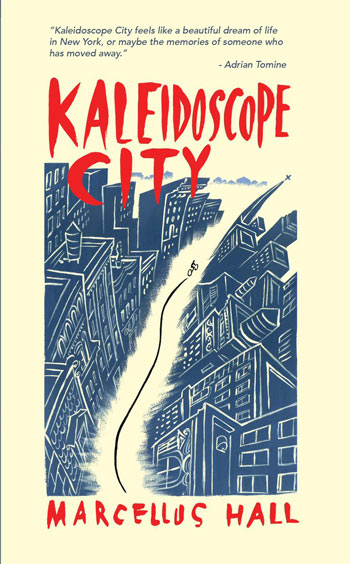 It’s hard to review a book like Kaleidoscope City.

The book has a very thin framework that the story operates out of. But that’s kind of the point. Instead of giving us traditional story beats, Hall paces his story differently. It gives the reader an emotional and spiritual journey through the four different seasons.

Our lone man who the story is about goes through the streets of the Kaleidoscope City. He has his sketchbook on him and he goes around seeing different places. These places give him inspiration to draw.

He also sees a mysterious girl.

Will he encounter her or will he just have glimpses of her?

This is a wonderfully unique book. Each picture is like a postcard with text from this city. It’s a mood book for sure but each frame has strong emotions running through them. It’s a book of deep and powerful resonance.

The artwork is like something from an earlier time. It also has bits of Peter Kuper to it as it goes from real and grounded to surreal and impressionistic. I loved this book and it’s understandable why people like Adrian Tomine and Bob Odenkirk do too. It’s something I haven’t seen or felt in a piece of art before. I haven’t stopped thinking about it since finishing reading it. This is a nice and refreshing change of pace for comics and a great book for early spring. 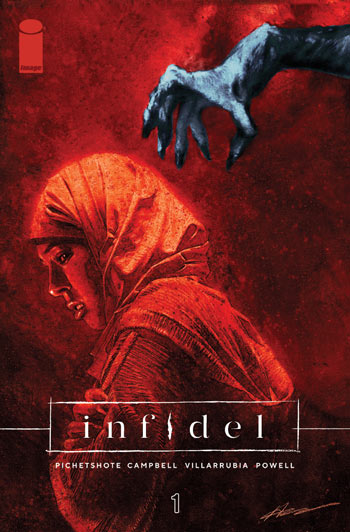 I saw a little bit of this comic book last year while at the New York Comic Convention. I sat with the writer, Pornsak Pichetshote, and he talked about the series.

So how does the first issue fare?

The first issue does feel a little cliched however. The story is one of those old haunted house stories. The twist is that the main characters are very diversified.

The house feeds off xenophobia from it’s victims.

The writing on the first issue doesn’t grab the reader as much as I hoped it would.

The art by Aaron Campbell is the best part. He really sells it for me. Campbell has been around for years and he is very talented. He can really switch up genres too as he embarks on a horror comic. He pulls it off effortlessly.

This first issue isn’t horrible. It just needs more to grab onto. Give it a look for the art and hope to yourself it picks up a bit. 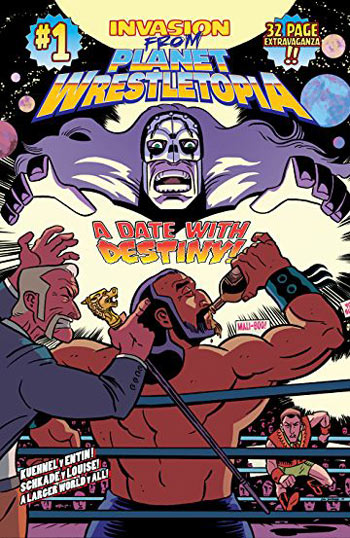 When I received this comic book my first reaction was, “what the blue bloody hell is this?”

Then I saw it was drawn by Dan Schkade who I just loved on The Spirit comic book recently. So I gave it a shot.

It’s a kind of goofy read. A mad wrestler declares himself the “Galactic Champion of The Universe.”

So the Earth is invaded as a result of this! They see it as an act of war!

And that’s about as deep as the plot gets. It’s silly for sure. The story made me smile a few times but it was not enough for me to invest in.

The art is the best part of this. If you need a slight distraction pick it up. It’s fun, but ultimately forgettable. 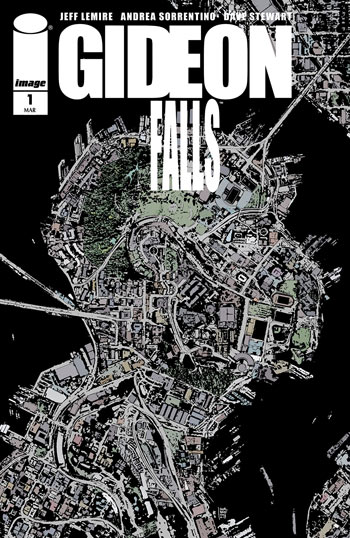 Man, that Jeff Lemire is a machine.

He not only writes a bunch of books, he also draws a monthly. The thing is though, he keeps the quality high.

This new number one is one of the most anticipated of the year reuniting Lemire with frequent collaborator Andrea Sorrentino.

This first issue introduces us to a man obsessed with finding a conspiracy in the city’s trash and a washed up priest coming into town with a bunch of dark secrets.

They decide to unravel the mystery of the Black Barn.

The Barn appears out of nowhere throughout history and leaves death and madness in its wake.

The story is great. Lemire really knows how to set up an interesting premise and make you pay attention. The art is nothing short of brilliant too. The colors by Dave Stewart deserve a mention as they are top notch.

Pick this up. This is a book that delivers the goods in one of the best openings ever in a comic. After that, it doesn’t let you go. 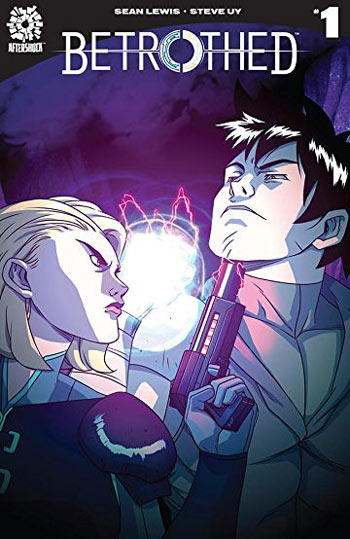 Aftershock has been making quite a name for itself in the independent comic book world.

Joe Pruett’s line of comics are interested in producing unique stories. This new debut series was not my usual cup of tea, but I was entertained nonetheless.

Kieron and Tamara are both seniors at the same high school. They are both orphans. They have never really noticed each other. But on their eighteenth birthdays, they find out they are from another dimension.

In this dimension they are both leaders in a war against each other! It’s time to fight to the death!

Sean Lewis takes the premise and runs with it. It’s a good time. The art is simpler than I usually like, but it’s still good.

Give this a shot! It’s really a decent debut! 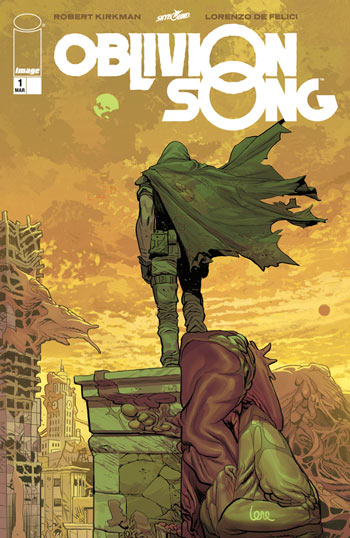 There’s a lot of attention on this book for sure.

Kirkman’s last two books both got television shows. So this is his newest venture in writing comics.

So the question is, is it any good?

Well, it’s certainly different. The story is about how a decade ago, 300000 citizens of Philadelphia were suddenly lost in Oblivion.

Everyone has given up on finding them. Except Nathan Cole.

He makes daily trips trying to track down anyone still there. But is he going back for other purposes?

The story is intriguing enough. I’m glad Kirkman still loves and writes for comics. I will have to see where it goes story wise. it did grab me. The art is cool too.

I’m interested to read more. And that’s good for a debut comic. 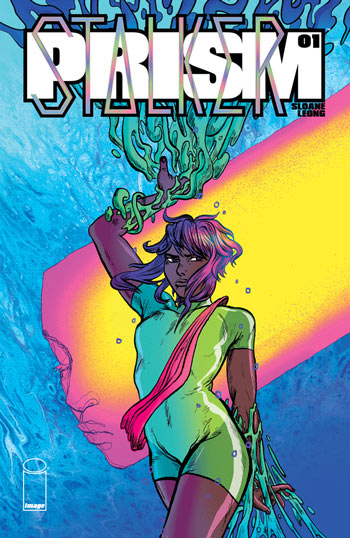 Sounds right up my alley.

Yet, for some reason, I couldn’t get into Prism Stalker. It was a slog to get through for me and unless it picks up I may have a hard time reading more.

Vep is a woman who is raised away from her home planet. Her home planet was devastated and now she’s a servant for a colony. She works hard with no end in sight.

But she may have an opportunity now to escape.

This whole thing felt flat to me. The art isn’t half bad but the writing is dull. 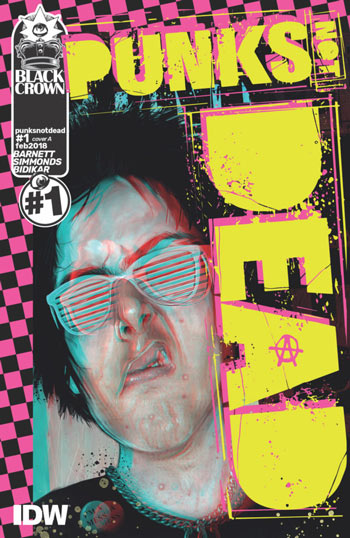 This was a good time. Sometimes a book you weren’t expecting to be good comes out of nowhere and surprises you.

Such is the case of this fine book right here. It’s really cool.

Fergie Ferguson is a bullied 15 year old teen who suddenly sees the ghost of a punk rocker named Sid.

Sid’s Spirit was trapped in London’s Heathrow Airport until he met Fergie.

Now, Fergie has a sidekick he can’t rid of as well as his daily problems.

The story is a good time. Barnett knows how to keep the reader engaged and interested. The art is fitting for this book and works very well.

Pick this up. I’m intrigued to see where it goes. 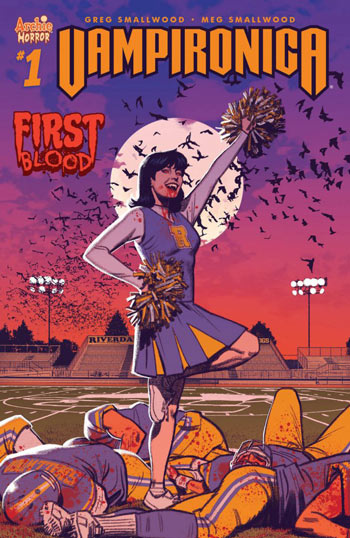 I’m just going to go ahead and give this an A.

I just love what the Archie line of comics has done these past few years.

Veronica as a vampire?

I was sold from the title alone.

This new ongoing series has Veronica bitten by a vampire. Then, she starts turning the town of Riverdale into a place for the undead.

Can she control it?

Or is everything going to go to hell?

The story is great. The art is by Greg Smallwood so you know it’s just fantastic. Pick this up. I love this book and would recommend it to anyone and everyone. 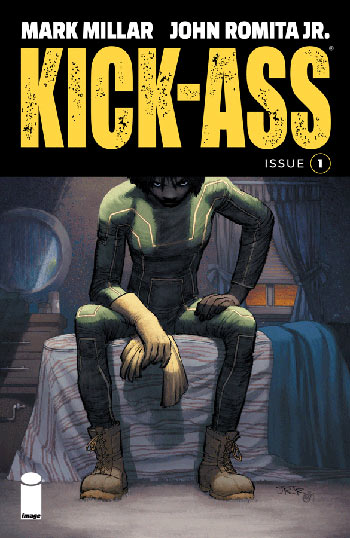 Mark Millar and John Romita Jr. are back on Kick-Ass!

But it’s not the Kick-Ass we all know and love.

So the question becomes: Is this book something that people are going to want to read each month?

Well, after reading the first issue, the answer is a resounding “yes.”

There is a new person filling the Kick-Ass role here. If I go too much into it, I would be ruining the fun for most readers.  Suffice to say, the new Kick-Ass is a woman and her motivations differ from the original Kick-Ass of Dave Lizewski.

Oh, that and it’s damn stunning. The art by Romita is awesome.

This is a reboot by the original creative team that works and functions at a high level.

Pick it up. It’s freaking great. 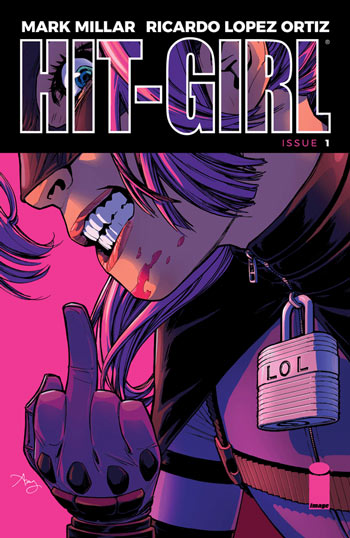 The new Kick-Ass series started off great and now we get a new Hit-Girl book!

Millar gets this book off to a rocking start and it’s something that will be the top of my list each month!

She’s back! Mindy has decided to travel the world to fight crime!

She decides to take a case of a mother who wants revenge for her murdered child! She takes it on but she has her eyes on a bigger fish out there!  Also, Mindy is lonely and decides she wants a sidekick. It’s amazing who she chooses and why.

The writing is sharp and fast like most of Millar’s output. The art is wonderful and it moves the story along wonderfully. I can’t wait to see where this goes. It’s a strong first issue!