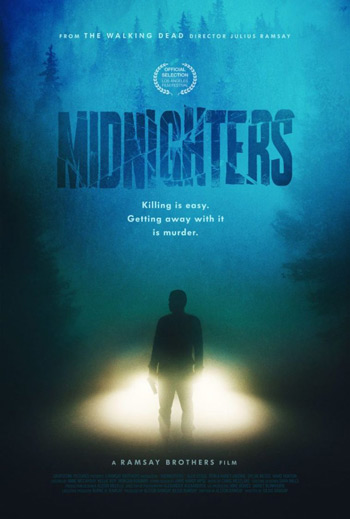 Midnighters, by TV director Julius Ramsay (with a script by Alston Ramsay) is a better-than-average example of a very specific type of independent film, often called noirish or Hitchockian, though “Blood Simpler” would be a more apt designation (in deference to the 1984 crime drama which both launched the Coen Brothers’ film career and spawned an entire modern subgenre of stylish chamber thrillers).

The “Blood Simpler” formula is…well, simple:  a small group of shady, desperate, and/or flat evil characters in a limited number of locations engage in tense conversations, ongoing power shifts, and sudden, creative bursts of violence, all rendered with conspicuous cinematic panache and an attitude of snarky post-modernism substituting for hard-boiled realism.

Moreover, films in the genre are typically less entertainments for general audiences or vehicles of self-expression than sizzle reels designed to attract financing for higher budget projects down the line (and small screen directing gigs in the meantime).

And, to be fair, Julius Ramsay aces the technical side of the equation here with images like an incongruously colorful Christmas tree framed by the doorways of an otherwise bleak, grey house, or the sight of a solitary woman in a feathery headdress wandering through a chiaroscuro New Year’s Eve soirée that seems to be set in the VIP lounge of the Overlook Hotel.

In actuality, the party’s a work event at a backwoods Rhode Island bar, and the lady in the headdress is Lindsey (Alex Essoe), who winds up with no one to kiss at midnight ’cause her washed-up never-was ballplayer husband, Jeff (Dylan McTee) is sulking over his dislike of his wife’s co-workers (even though, as she pointedly notes, her job is the only thing keeping the couple afloat).

That rocky dynamic rapidly slides into full avalanche mode on the drive home from the party, when Jeff strikes a mysterious pedestrian whose presence on a rural back road near their unfinished home may be less than coincidental.  From there, the situation grows increasingly dire as the couple loses track of one of their license plates at the accident scene and Lindsey’s ne’er-do-well sister (Perla Haney-Jardine) shows up dragging her own messy baggage into the whole bloody mess.

Still, despite competent work on both sides of the camera, Midnighters doesn’t really hit its stride until Ward Horton appears, chewing scenery like Tom Cruise in full Frank T.J. Mackey mode as an unnerving plainclothes detective, and that over-the-top infusion of energy quickly blasts the movie out of its straight-to-video rut.

Indeed, one squirm-inducing scene involving Horton’s character may earn the film a measure of cult classic status all by itself, though for all its eventual strengths, Midnighters would still need tighter plotting, sharper dialogue, and stronger character motivations to be truly ready for prime time.

Midnighters arrives in theaters, on VOD and Digital HD on March 2, 2018.