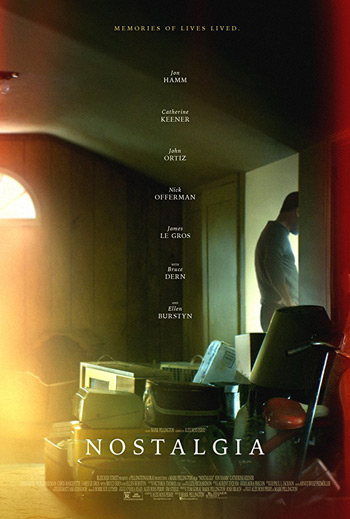 As humans we place sentimental value on objects that represent special moments in our lives.

Whether it’s a childhood toy that provided comfort during a stormy night or the wedding ring of a first love, these connections and memories help to make us feel whole and tell a story of days gone by.

But what happens to those objects when we die?

Are they tossed aside with no care?

Donated to create memories for someone else?

Or do the becomes a collection of memories left behind for families to feel the burden and guilt of a life that’s no longer here.

In Mark Pellington’s Nostalgia, we meet an array of people dealing with the burden of objects from people who has passed and the guilt we feel when we’re left alone with material items that paralyzes us with fear of disrespecting their memory.

Stretching from classic trinkets to modern-day text messages, each actor must find a way to convey hurt, pain and guilt in new and different ways. At times the film is emotionally draining and downright corny (in the most sweetest way) like Jon Hamm as a collector but there are rare moments that simply take your breath away.

Catherine Keener and James LeGros as a grieving couple who find solace in each other, while Mikey Madison delivers a performance so impactful, it’s haunting even after the film has ended. Bruce Dern, as a lonely man facing the end of his life is heartbreaking as he controls his narrative by deciding which possessions holds the most importance to him instead of allowing others to make the decision for him when he’s gone.

While Ellen Burstyn isn’t that fortunate to give careful thought about which items mean the most to her, her story is a reflection of our greatest fear. In the midst of a fire, what items would you save first? In a mad and hectic dash she must make these quick decisions while also left with the aftermath of literally picking up the pieces she decided to leave behind.

While dramatic and forceful at times, what makes Nostalgia so gripping is that we can find pieces of ourselves in each story. Written by Alex Ross Perry, he has created a script that allows for the actor to convey their story with every inch of their soul, pulling you into their lives. Yes, there are tears, but there’s also a sense of confusion, lost and reassurance delivered with just a look or a touch. Dern is a master at showcasing these quiet emotions, as he decides which item ignites a special spark in his life. While Burstyn’s emotions pour through the screen as she sifts through a lifetime of now ruined memories. You feel her soul die each time she finds a new object, yet instead of making it uncomfortable, she uses her pain to pull you in closer to her story.

Nostalgia is painful and at times not easy to watch but its rawness is filled with layers that’ll help us appreciate the ones we love while they are still alive instead of looking to inanimate objects for forgiveness for not being there for a person while they were still alive.

Nostalgia is now playing in theaters.