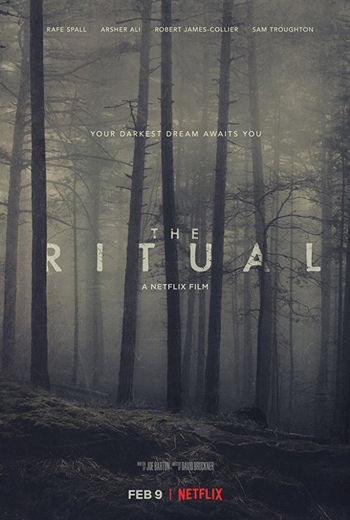 Many, many horror film starts out with a group of people hopelessly lost in the woods, but David Bruckner’s The Ritual wrings every drop of terror out of the premise, making for a tense, eerie film that will likely stay with you.

Much like The Descent, the outing begins as a way for four friends Luke (Rafe Spall), Phil (Arsher Ali), Hutch (Robert James-Collier), and Dom (Sam Troughton) to regroup after a tragic loss. The British foursome plan to hike through Sweden as tribute to their friend Rob, who was tragically killed in a convenience store hold-up.

All is well until Dom, who’s the least fit to begin with, injures his knee in the middle of nowhere. Facing an arduous 14-hour hike to their destination, they opt instead to take a shortcut through the woods.

The signs are evident almost immediately that they should never have gone into these particular woods in the first place. When they find a slaughtered animal — possibly a moose or an elk— hanging 15 feet up in a tree, they’re horrified, but only Luke insists they need to leave the woods right now. The other three shrug it off and keep going.

Even the strange pagan symbols in the trees, and the disturbing nightmares they have, don’t convince them they should turn back.

Luke flashes back to seeing Rob die in the convenience store, and the fact that he didn’t do anything to save his friend. The tension between the four men, and the fact that some of them blame Luke for Rob’s death, only heightens as the forest begins to take its toll.

Whatever killed the elk seems to be stalking them too, only we don’t see it. We only hear some unearthly howls, which makes the men’s terror all the more realistic. The sound design here is excellent, as is (what I assumed to be) the mostly practical special effects.

I was never a fan of The Blair Witch Project, to which this has inevitably been compared): It seemed like a really tedious episode of Road Rules with only a few moments of terror. While The Ritual occasionally stumbles (and its ending takes a weird left turn on par with The Witch), the fact it’s not another found-footage film is a major strength.

As the guilt-ridden Luke, Spall is terrific. So many horror films are about people coming to terms with death that it’s become a rather tiresome cliché. But here, it works. The whole trek becomes a test for Luke: Will he fight back this time or will he give in to cowardice again?

Without giving too much of the plot away, The Ritual fits in nicely with the recent crop of folk horror films like The Witch, Kill List and Corin Hardy’s underrated The Hallow.

I haven’t seen Bruckner’s previous film The Signal, in which he directed the first segment, “Crazy in Love” or his “Amateur Night” portion of V/H/S. But I was a big fan of his deeply disturbing segment “The Accident” in the 2015 horror anthology Southbound.

You may be debating whether the ending of The Ritual works, but its bare-bones horror is well worth seeing.

The Ritual debuted on Netflix on February 9.