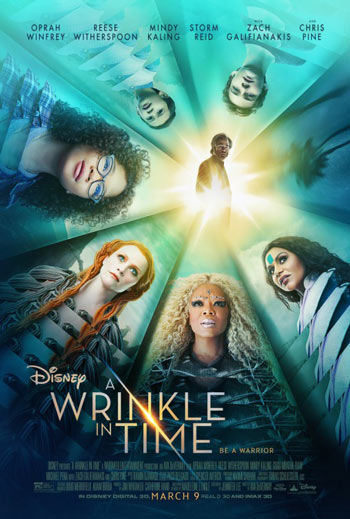 The classic sci-fi novel A Wrinkle in Time has long been considered an “unfilmable” novel, and, sadly, the arrival of Ava DuVernay’s big-named, big-screen adaptation has not changed that status.

With any fantasy film, you have to let the film convince you that the worlds it is showing you are real.

I fondly (but somewhat distantly) remember the book and its sequel, A Wind in the Door, and I really wanted to love this movie.

But A Wrinkle in Time never lets you fully believe in it.

Despite hurling our heroine Meg (Storm Reid) across the universe in a search for her missing scientist father (Chris Pine), the film just never takes flight the way it should.

Maybe it’s the overly busy CGI. Or maybe it’s that the ever-changing universe of the film is never fully established, so none of it ever feels real. So even when Meg flies, we never feel the same wonder as, say, when Harry Potter soared into the sky on the back of a Hippogriff. We’ve seen all this before in countless fantasy films.

The makeup and costumes of the three mystical beings played by Reese Witherspoon, Mindy Kaling and Oprah Winfrey are often the best part of the film.

As the whimsical Mrs. Whatsit, Witherspoon offers a ditzy and even somewhat rude introduction to the world of “tessering,” that is folding space to end up in a different part of the galaxy. Kaling is an earth-motherly Mrs. Who, who speaks mostly in quotations. That leaves Oprah as the larger-than-life Mrs. Which, who offers the most moral guidance and empowerment of the three women.

The 1962 novel has been updated in many ways, including that Mrs. Who now quotes Outkast and Chris Tucker along with Shakespeare and Winston Churchill. The themes of hope, loyalty and believing in yourself are, of course, timeless.

In the book, Meg was a 13-year-old misfit white girl who hated her mousy brown hair, braces, and glasses. In the film, Meg (Storm Reid) also wears glasses and hates her unruly hair. The fact that film Meg is biracial (Mom is Gugu Mbatha-Raw, dad is Chris Pine) is never used as one of the reasons she’s bullied. She’s a target because she’s shut everyone out after her dad disappeared. And because having a mysteriously missing dad is an easy way to pick on someone.

Meg and Charles attend James Baldwin school and there’s a quick, clever shot where little brother Charles Wallace sits in a chair just like the real James Baldwin in the photo on the wall behind him. The effortless diversity of Meg’s real world — and the film’s fantasy world — points up how often we don’t see that in blockbusters. And while it’s an enormous plus, it’s not enough to make up for the parts of the film that just don’t work.

Part of the problem here is simply in adapting a classic children’s novel. The adventuring kids you liked so much and identified with in the books can often be, when played by real children, annoying as hell.

Storm Reid is sympathetic and relatable as Meg, as is Levi Miller as Calvin, a popular classmate who — somewhat inexplicably — joins her on his journey. But Meg’s little brother, Charles Wallace is another story.

In the book, he’s adorable, a child prodigy who seems to have an unerring instinct for knowing what’s about to happen. As played by 9-year-old Deric McCabe (who was cast over thousands of other actors), he’s insufferable. The wise-beyond-his-years little brother is now a wiseacre who you just want to shut up. His big scenes fall embarrassingly flat in the film’s climactic showdown, which also chokes on too much CGI.

Also cringe-worthy: A quirky man-bunned Zach Galifianakis as the “Happy Medium,” who helps guide Meg with some New Age-y advice.

As for that new Sade song? Like the other pop songs in the film, it completely pulls us out of whatever peril Meg is supposed to be in at that moment.

Every now and then the central message of the film — that you need to embrace the light so you can fight the darkness — begins to resonate. And then we’re flung into another CGI landscape and that feeling quickly fades.

But if little girls are seeing the movie and walking away feeling encouraged and empowered, then the Mrs. W’s haven’t failed.