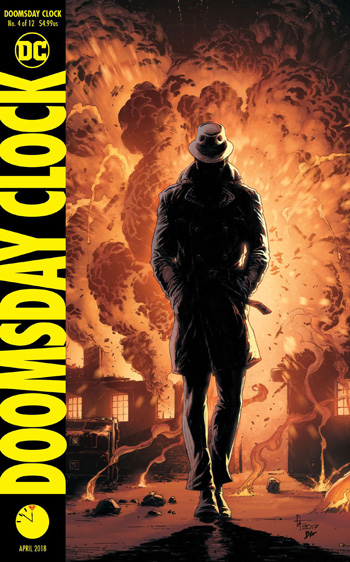 Geoff Johns and Gary Frank deliver the best issue of Doomsday Clock so far by delving into the origins of the new Rorschach.

As it happens, it’s Reggie Long, son of Dr. Malcolm Long, the prison psychiatrist in the original Watchmen. Dr. Long attempted, in vain, to ingratiate himself to Walter Kovacs, just as an Arkham doctor attempts to do with Rorschach the second.

As for the revelation, it works out.

This detail lends to the dreamlike nature of this issue, setting Reggie up as an unreliable narrator, while allowing Gary Frank to play around as much as possible with layout and pencils. (All the same, it would have been nicer to see them take this into a more bizarre direction.)

Until now, Johns’ story has felt like “Watchmen fan-service” with DCU characters thrown in. This issue almost falls into that trap, with the further reveal that Reggie befriended former Minuteman, the Mothman, in an institution shortly after Veidt’s original gambit. On the other hand, the relationship between the two is handled with grace. It’s touching and sad, perhaps a little too treacly to have been included in the original Watchmen, but somehow it works here. (The backmatter focusing on Mothman’s fractured relationship with his family adds an extra layer of tragedy.)

Perhaps then, the biggest takeaway from this issue is the acceptance that, for all its stylistic nods and stabs at the depth of the original series, Doomsday Clock will never really be Watchmen, or anywhere close to it. Johns really isn’t that kind of writer. His style is far more direct than Moore’s denser, yet more elegant approach. The closest parallel is to Walter’s back and forth with Dr. Long in the original series. There, Moore used Dr. Long’s point of view to reveal much about Walter through a different lens, helping to paint a thorough picture. Here, we just get a story of Reggie going through a similar situation, but without the narrative gymnastics and an extra helping of sentimentality Moore might have refrained from using.

On the other hand, freed from the constraint of telling a more straightforward story, Johns and Frank are able to craft what may by the closest take on Watchmen yet. Johns’ strongest writing on this series comes as he plays around with both time and Reggie’s sanity.

It helps that Gary Frank delivers some of his best work on this issue, taking what he’s learned from Dave Gibbons and putting his own stamp on it. His facial expressions are some of the best in the business, but he applies recurring motifs and transitions as well. We only see Adrian in flashback this issue, but he looms large over the story, so his face becomes a recurring theme, particularly in the form of an Ozymandias jigsaw puzzle. (Johns’ dialogue may be too on the nose in these spots, however: “I’m trying to put it together, but something’s missing.”)

Perhaps the biggest disappointment, plot-wise, is the twist that Batman has engineered Reggie’s current predicament in an effort to draw more information, even disguising himself as Reggie’s therapist. The irony is that Reggie likely would have volunteered this information himself had Batman not believed him too crazy to do otherwise. Johns’ Batman remains forever a jerk.

My biggest complaint is that we still don’t have a sense of what this story really is, four issues in. Ostensibly, it’s about the search for Dr. Manhattan, but Johns has been taking so much time with setup that the plot has barely moved. Doomsday Clock #4 is more wheel-spinning, but at least it’s better wheel-spinning than before. Even though it feels like a take on something Alan Moore did more effectively the first time, it’s probably Johns and Frank’s best take on it yet.