This has been a great week for comics! 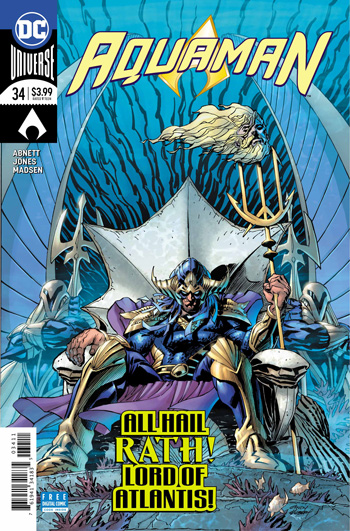 This is a great issue!

In case you were wondering how King Rath became the delightful villain that he is, Dan Abnett has written an origin story! And it’s an extremely compelling one!

The story is called “King Rath: Secret Origin.” After King Rath is defeated, he goes off to sulk! And in his sulking, we found out how he came to be. Abnett writes a winner here and it’s sure to be a classic.

The art by Colak is great. I think Colak may indeed be turning into a star. Pick this up as it’s one of the better DC issues of the year. Thumbs up for sure. 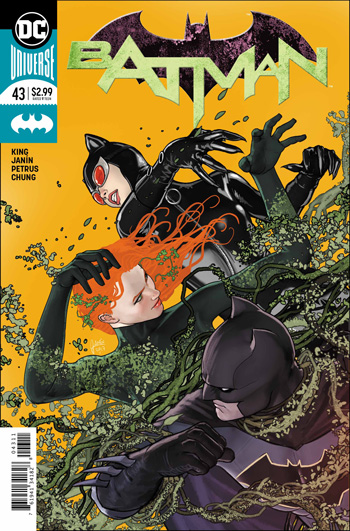 It is the third part of the storyline “Everyone Loves Ivy!”

Tom King writes another fine issue here. His version of Poison Ivy is one of the best interpretations of the character. It’s stellar.

Poison ivy is after world domination. And she will stop at nothing to accomplish that! This issue is the showdown between Batman and Ivy.

Will the world go to hell? Found out here!

The art by Janin is just excellent. It’s so great to see how far he has come.

Pick this up. I’m loving where this is headed. It’s a treat to read with every new issue that hits the stands! 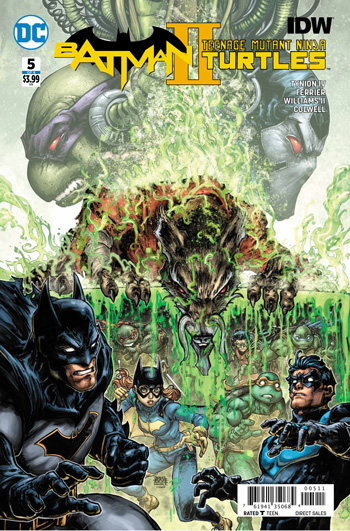 We are in a place of absolute lunacy in this book now.

And hey! That’s just fine with me.

But is it too much?

James Tynion IV explores that with his writing here and it shows. (And if you like the dialogue, thank former FOG! writer turned comic’s pro Ryan Ferrier!)

In this issue, Donatello is infected with Venom! He’s going crazy! He’s fighting the Foot Clan alone with rage! It’s up to Batman to stop him and get him back to who he is.

Splinter, meanwhile is headed towards an encounter with the Lazarus Pit. All this and they have to stop Bane!

The story is just nuts. The art is a beautiful thing. Freddie Williams II needs to draw more of the Turtles and of Batman. But with a better writer. Still, this is just fun. Enjoy it at your leisure. 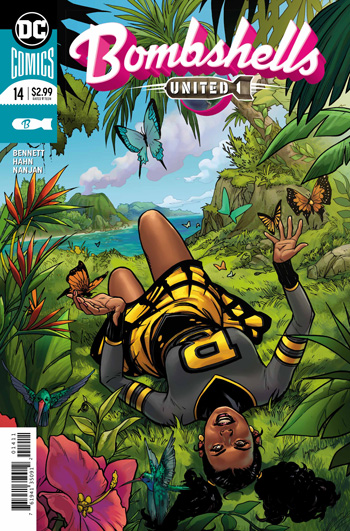 This book is very good.

Marguerite Bennett writes these characters with ease. Every character in this book is so well developed.

It makes the stories pop more and increases the stakes.
There is something afoul on the islands!

A mysterious radio signal turns anyone who hears it into a malevolent mutation! Danger is everywhere!

And it’s up to the Bombshells to stop it!

The art is very strong for this book as well. I think a major storyline would really help get this book out there more. And it should be. It’s very well done and I have been liking it every month. 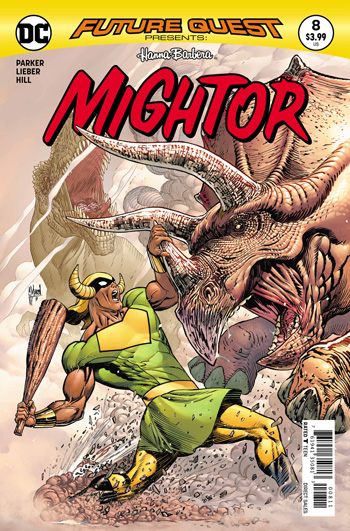 This is another fine issue of this series that nobody that I know is talking about!

I have been loving what Jeff Parker and gang are doing here. It’s a hell of a lot of fun and well done.

There is an alien fleet headed toward earth.

They want to persuade the humans to join them!

But we all know that isn’t happening! So it’s starting to look like all out war!

It’s a good chance to see how Lieber handles them as an artist. He does great. The story works well with the art. Pick this up. It’s pretty awesome. 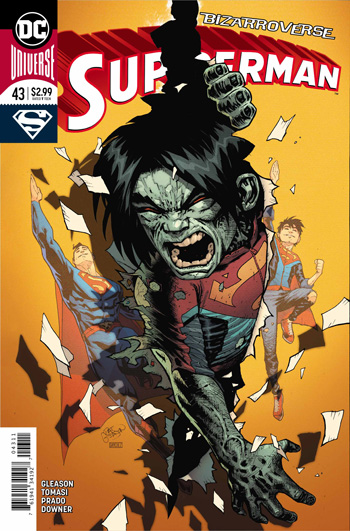 This is a great book.

Part two of the “BOYzarro” storyline really picks up.

Tomasi and Gleason are great storytellers and here they prove themselves again. The storyline is strong and awesome.

Superboy and Kathy are trying to keep BOYzarro under wraps.

The problem is that BOYzarro won’t be kept down! He’s wrecking havoc everywhere! And Bizarro and Superman aren’t going to be pleased once they catch up to their kids.

The art by Gleason is something else. He’s one of the best artists working today. He’s come a long way too. Good for him. He deserves all of the accolades he gets.

I’ll miss him and Tomasi on this title. 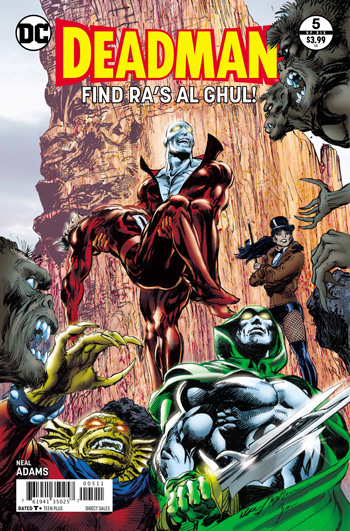 Neal Adams has done a lot for comic books.

And comic books as a whole have benefited. That’s why it’s so sad that this book isn’t very good. The story is trite and a slog to get through.

Deadman is on his way to Nanda Parbat.

This leads to secrets being revealed!

And you won’t care about any of them!

On the plus side is the art. You have to admire Adams. He is still doing it. He’s not the artist he was but he’s more than capable of drawing incredibly.

He just needs a writer these days. 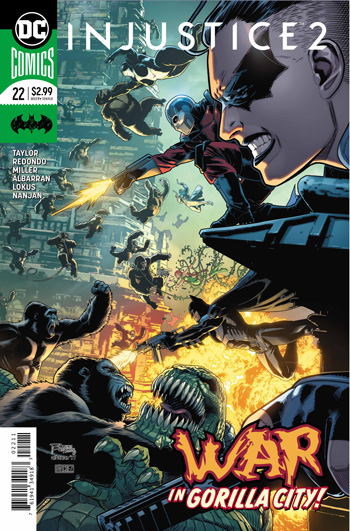 Well, this is just a damn good time.

Tom Taylor kicks some serious butt writing this title. The stories are sharp and the characters are strong. I never quite know where it’s going.

There’s a rebellion going on in Gorilla City.

Ra’s al Ghul has a mission and it’s in jeopardy! The Suicide Squad has been charged with getting him out.

Meanwhile, Amazo is out to cause destruction. But he should be careful. Why?

I’m enjoying the sheer bravery of this comic. It takes some of the old staples we know and puts a fresh shine on them.

The art is pretty spiffy too. Give it a shot! 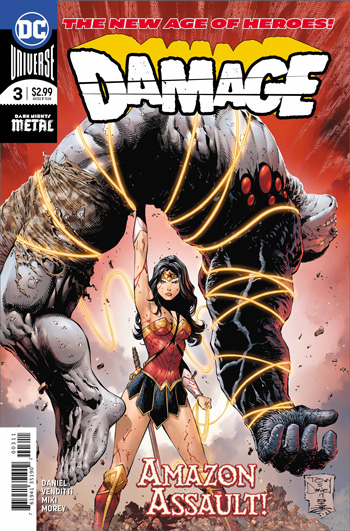 This has been an enjoyable experience thus far. I’m not sure that this title has much of a future beyond twelve issues though.

It’s fun at the moment but I’m not sure where it can really go.

Right now the story is lively but how long can it last?

This issue features Wonder Woman versus Damage. The two characters tussle and it leads to a lot of…well, damage!

Then, Wonder Woman uses the Lasso Of Truth on him. And guess what happens? Read it to find out!

The art by Tony S. Daniel is awesome! He is doing the work of his career on this. Give it a shot! It’s an enjoyable thrill ride at the moment! 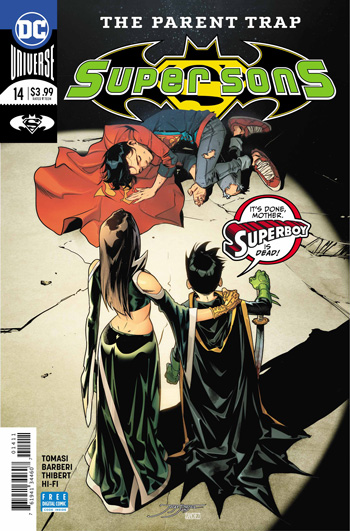 This has been a great little series that is coming to an end. I love what Tomasi did here. It’s time to enjoy the last few moments of the book.

This book is about Talia al Ghul coming back into Damian’s life.

And it’s looking like Superboy is caught in the middle. Can Superboy forgive Damian’s past? And what’s going to happen to the Super Sons as a team?

The writing is strong. Tomasi knows the characters and he excels at writing them. The art is decent enough.

Pick this up and read the series before it ends!