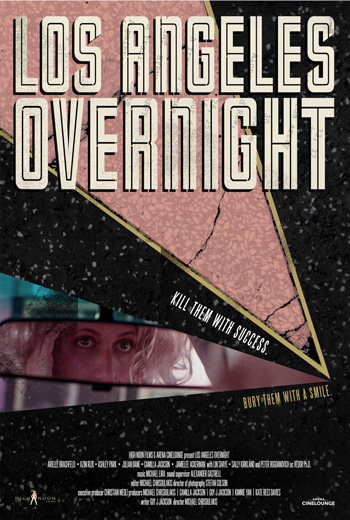 A struggling L.A. waitress, desperate to keep her stalling career afloat winds up being hunted by local organized crime after she and her boyfriend steal some of their money.

Everything that happens beyond the “heist” is ridiculous. There is quite a bit before the heist that’s ridiculous too.

To say this movie is derivative and all over the place is doing a disservice to derivatives.

The title Los Angeles Overnight is as un-creative and hackneyed as the script and execution. It’s a clear play on L.A. Noir, but saying it falls short is an understatement. I am more than willing to suspend disbelief and welcome any premise the filmmaker wants to throw at me, but I can not and will not give up reason.

There is a foot chase in the middle of this movie that is so ridiculous, so implausible, so idiotic that if I hadn’t promised the editor of this site I would review this movie I would have turned it off right there. Without going into too much detail a henchman who weighs 250+ pounds and had recently been severely beaten into unconsciousness by his boss runs down a younger, thinner, uninjured man and the sequence ends when the 25 year old has a HEART ATTACK in the middle of the extended chase. I will believe zombies have arisen, aliens have invaded, and radioactive spiders gave Peter Parker superpowers, but there is no chance on planet Earth the concussed chubby henchman runs down the kid, to death. No. No. No. I mean, how lazy can the writer be? They couldn’t come up with anything more plausible? No one on the set said, “Umm… are you sure you want to go this way?” Was the budget so stretched they couldn’t afford to shoot a car vs pedestrian accident?

Peter Bogdanovich plays a hypnotherapist who intermittently shows up and goes on these overacted over-written existential rants. I swear the producers cast him because he was Lorraine Bracco’s therapist in The Sopranos and they were hoping his gangster cred would hold up. I assume they shot all of his scenes in a couple of hours and he was never on set with the rest of the cast. He probably never read anything but the scenes he was doing. It’s his only excuse for participating in this at all.

The lead, Priscilla, is played by Arielle Brachfeld. She actually pulls off the wannabe struggling actress pretty well. However there are moments when she is supposed to be this Machiavellian manipulator and they seemingly come from no where. Her character is incongruous. When the main character in your film doesn’t inspire strong emotion, either positively or negatively, you’ve failed as a film maker.

I could keep taking this movie apart for 5000 words, but instead I’ll leave you with a positive.

Ashley Park. She plays the head baddie’s wife and she steals her scenes. She’s really captivating. First, her delivery is super smooth and comfortable. Second, she is shockingly beautiful. It’s hard to look at anything else when she’s on the screen. I’d be interested to see her in a role that was well written, where she wasn’t relegated to the background.