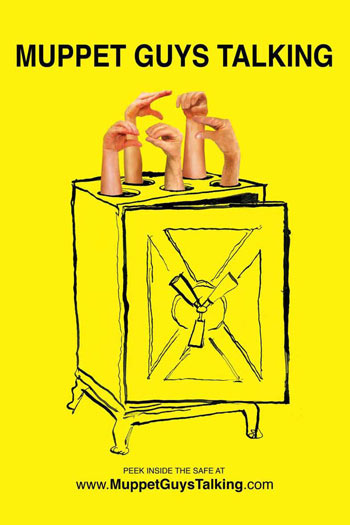 The title of this chatty documentary says it all.

One thing they conspicuously DON’T talk about is the rise and fall of the megastar Muppet, Elmo (whose original performer, Kevin Clash, was forced to resign amid allegations of sexual misconduct, though the charges were later dropped).

And while that omission is perhaps understandable, there’s likewise barely a mention of Carroll Spinney, the scandal-free voice of googly-eyed icons Big Bird and Oscar the Grouch.

Given the (very) brief running time, though, it’s understandable that Oz keeps the focus squarely on the group in front of the camera and their memories of becoming Muppet guys (with Brill sharing her thoughts about generally being the sole female in a boys club ensemble that, of necessity, spent long hours cramped together behind and beneath various set pieces, arms aloft, bringing inanimate objects to life with only their hands, arms, and voices).

Yet despite the physical discomfort of Muppeteering and the occasional tensions associated with any form of creative endeavor, Brill and her colleagues all share universally fond memories of their collaborations together, in large part thanks to the remarkably positive and relentlessly upbeat workplace environment fostered by the guy who brought them together in the first place:  Jim Henson.

Indeed, the invisible spirit of Henson is practically a sixth cast member as the ensemble discusses the gone-too-soon creative force who not only reinvented puppetry for the media age — starting on a local Washington, D.C. affiliate during high school before rising to national prominence via Saturday Night Live‘s try anything first season, Sesame Street, and beyond — but also created and performed beloved pop culture icons like Ernie, Rowlf the Dog, and Kermit the Frog.

Indeed, one story about Henson submerging himself underwater in an airtight tank to create the illusion of his signature felt amphibian strumming a banjo and singing “The Rainbow Connection” in the middle of a swamp helps to explain the motivation, affection, and loyalty he engendered in his employee/collaborators, since he was always willing to do at least twice as much as he asked from anyone else.

Unfortunately, his relentless work ethic was also his downfall, with a hectic professional schedule delaying medical care that might have prevented his tragically premature death in 1990 at the age of 54.

Still, while hardly comprehensive, Oz’s doc is nevertheless an entertaining, upbeat tribute to the legacy of Jim Henson and his collaborators (as well as a sweet memorial to Nelson, whose reminiscences were fortuitously captured before he, too, passed away, shortly after filming).

To watch the conversation, visit muppetguystalking.com because, according to the site, it’s “the ONLY place to get our documentary. Seriously.”