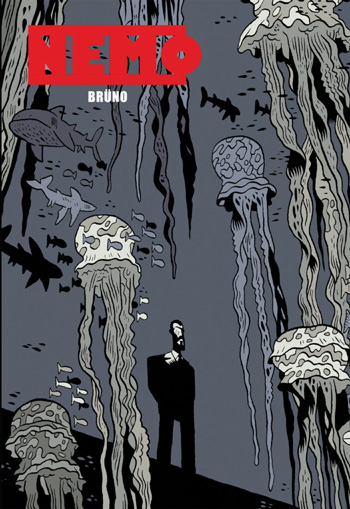 European comics art is often very, very different from US comics art.  Among the first books I ever read about comic books were Comics: Anatomy of a Mass Medium and The Penguin Book of Comics, both of which touched more than a little on European comics.

My point in mentioning all that is that I’ve long since felt an affinity for European comics artists and therefore I’m pretty impressed with Brüno.

Looking him up, I see that he’s been around for a couple of decades already. In fact, the book at hand, Nemo, seems to have originally come out in Europe in 1998. If, like, me, you hadn’t seen it before now, though, you’re in for a treat.

Just in case you’re wondering, this is, in fact, Jules Verne’s CAPTAIN Nemo rather than Winsor McCay’s LITTLE Nemo (no relation, presumably).

Almost more a character study than a flat-out adaptation of the classic 20,000 Leagues Under the Sea, the book is characterized by its masterful storytelling, wonderfully stylized illustrations, and creative use of thick, sludgy color. The English translation is very well done but one can fairly easily follow the basic story just by the expressions of the characters.

Nemo—also a character in The League of Extraordinary Gentlemen and not really a nice man in either version—is a misanthrope who privately delights at his own selfish denial of the human race, even as his pride in his beloved submarine, Nautilus, keeps showing him as human in spite of himself.

The story deals with three men who inadvertently end up onboard the underwater miracle machine Captain Nemo has invented, their struggles to either come to grips with their fate or to escape, and the adventures they enjoy as a part of it all.

If you’re a strict Marvel/DC fan, the art here will likely be a turnoff. If not, open your mind, let the water pour in, and enjoy Brüno. If this was what he was doing 20 years ago, I definitely have to seek out what he’s been up to lately!