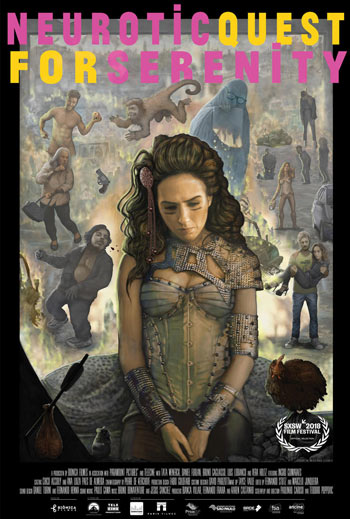 Entered as part of SXSW Film’s Latinx highlights this year is an insane new hyper-comedy from Brazil called Neurotic Quest for Serenity from directors Paulinho Caruso and Teordoro Poppovic.

Coming from both a commercial background and a kids television series, this is the first feature film from the writers/directors, and they burst into big-screen comedy with all the confidence of the Farrelly brothers, with some Pedro Almodóvar and Stanley Kubrick thrown in for good measure.

Opening with a post-apocalyptic dream sequence that proves to be both Freudian backstory and a brilliant set-up for comedic payoff, we are introduced to Kaka K, the neurotic protagonist. She’s a famous actress with millions of admirers, but she’s also an unhappy mess, trapped by obsessive compulsive disorder and stalked by a superfan. The slightest visual cue triggers her anxiety, which, for the the audience, sends us on visual montages of her inner chaos.  A stove top left burning escalates rapidly to images of nuclear annihilation and, naturally, 80s television icon ALF screaming his head off.

We follow Kika’s accidental uncovering of happiness, or meaning, through the course of the film, and the mirror is never lowered once. The film is a sharp, almost nihilistic commentary on the search for serenity, and you don’t have to be neurotic to find a few giggles along the way.

In Kika, Caruso and Poppovic have created both a satire of pop culture’s distractions and the insignificance of its temporary enlightenment. Her quest in the film is purely for our laughs, and a lot is lampooned along the way. The character works thanks to Tatá Werneck’s comedic timing, but also a fearless foda-se additude. It’s a Portuguese thing. Look it up.

Neurotic Quest for Serenity is best when raunchy, and there are some hysterical setups—one involving a “nail monkey,” another over a mysterious Chinese meal, another involving the latest in nude selfies – the “boobassgina.” But it’s not all low-brow. At one point there’s an all-knowing call back to a famous line of dialogue in Woody Allen’s Annie Hall, and the moment where Kika encounters a competitive actress at an important production meeting was my favorite.

While it’s designed to play to the masses like a Brazilian Judd Apatow film, there’s enough twisted commentary keeping it alternative comedy. Like last year’s Colossal, which mixed a similar blend of comedy and fantasy with dark undertones, this film is likely to both entice and repel SXSW audiences. I’m pretty sure the team behind it will find serenity in either scenario.