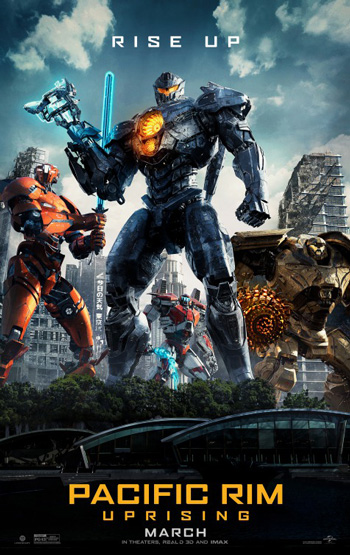 The colors are brighter and more vibrant. The action is close up and edits are fast. And there are more Jaegers (human, piloted super-size, fighting robots).

What Pacific Rim: Uprising was lacking was anything resembling an original thought.

The story is an amalgamation of the original film, Japanese Mech anime from the 90’s, and every 80’s sequel trope. The result is a film that will probably pull in a decent two weeks hall at the American box office and then crush the international markets, particularly China.

If you didn’t see the first film, or maybe you did but don’t remember it; don’t worry. The film spends the first 10 mins recapping the first Pacific Rim with voice over and flashbacks intercut with current day shenanigans of our new “hero” Jake (John Boyega).

The war against the Kaiju is over.

The world is slowly rebuilding itself. Jake is the underachieving son of the original film’s savior, the legendary Stacker Pentecost (Idris “Cancel the Apocalypse” Elba).

Jake spends his days scavenging old battle sites for Jaeger tech to pay for his high end, nomadic lifestyle. Jake is forced to face his past when he is picked up by military police after a botched scavenging job. Jake is given the choice between prison or training new Jaeger recruits.

Cue every slacker who becomes a hero trope. He’s the son of the last film’s dead hero that we never heard about until now. He isn’t his dad (which he will tell you often and at length), so he rebels against his family legacy.

And just for fun let’s add a side of young, orphan genius in the form of Amara (newcomer Caillee Spaeny), a self-taught Jaeger pilot/engineer who somehow built her own fifty foot Jaeger and is picked up with Jake after a almost successful escape from the police in her homemade Jaeger, proving her value to the military.

But that is not Amara’s true value.

Her true purpose is to act as “Exposition Girl” for the rest of the film. Amara spends a good portion of her screen time spoon feeding us introductions to characters, robots, and plot points. It’s as if the team of writers didn’t trust the audience to follow any of the story without some character to hold their hand. And what plot exists in the film is heavily, let’s say for niceties sake “influenced” by the 1995 Japanese Anime classic, Neon Genesis Evangelion. If you haven’t seen the anime, you probably won’t be bothered. But if you have, Pacific Rim: Uprising will probably make you shake your proverbial fist.

Even after borrowing a plot twist from Evangelion, the writers had an opportunity to take the idea somewhere interesting, the possibility that it isn’t aliens that we are fighting, but ourselves. That our fellow humans are the most dangerous adversary because they will usually act in self interest. Nope, they abandon that idea half way through. It’s back to punching invading aliens.

Almost the exact same plot as last time, only the Kaiju is bigger.

Most of the cast is wasted on cookie cutter, one dimensional roles. I don’t blame the actors, they are working with what they are given, but it’s hard to shine with lazy writing.

To be fair, the first film had a lot of the same problems, but there was a charm to it that set it apart from the Transformers franchise.

All this aside, if all you are looking for is shiny robots that look cool beating up monsters or each other, then great, you are all set. Buy your ticket and popcorn, turn your brain off, and settle in.

Personally, I’d rather stream some Robotech from Crunchyroll.