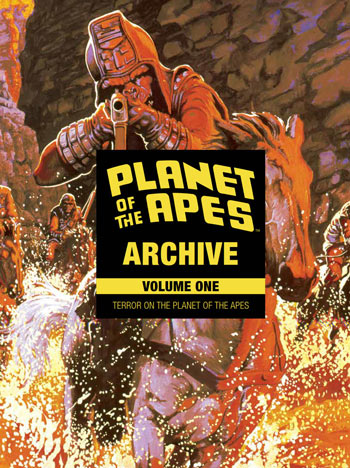 Y’know, if we’re being honest, no one would ever really mistake a person wearing John Chambers’ great makeup for the original Planet of the Apes movies for real simians.

So a certain amount of the proverbial suspension of disbelief is necessary to truly enjoy the original saga and its attendant spin-offs.

The screenplay for 1968’s Planet of the Apes bore little resemblance to its inspiration, Monkey Planet, by French writer Pierre Boulle. With Rod Serling’s name attached to it, we were led to expect the unexpected. We start out with Moses, himself, Chuck Heston, in a scenery-chewing performance and slowly work our way up to meeting the gorillas, the chimpanzees, and the orangutans. The actors’ performances are what sell the makeup. They may not seem quite like real apes but they very much DO seem REAL.

Through five theatrical movies, a one season TV series, a cartoon version, and numerous tie-in books and other merchandising, we accepted the world of the apes. It was that acceptance that made Marvel’s Planet of the Apes magazine both possible and successful.

At one point, Planet of the Apes was my favorite of the Marvel mags, in fact. Edited variously by Tony Isabella and Don McGregor, the mag offered up a good mix of behind the scenes articles, reviews, and a serialized comic book adaptation of the films themselves. Remember, this was before any sort of home video other than 8mm or 16mm films. My family didn’t own a film projector and I didn’t really know many that did.

The true gem of the magazine, though, was the all-new running storyline, “Terror on the Planet of the Apes.” Writer Doug Moench was spread a little thin in this period but it didn’t show. Much of his 1970s work at Marvel—that included Master of Kung-Fu—still holds up better than a lot of contemporary comics and this is no exception.

More exciting and better written than Battle, the last official Apes movie at that time, Terror introduces us to Alexander, a young chimpanzee, and Jason, his young human friend. The story starts with racist gorillas who kill the latter’s parents and from there Moench’s overworked mind just runs rampant, tossing in politics, giant monsters, cyborgs, Forbidden Zone mutants, and a host of great new characters such as the wonderfully named Gunpowder Julius, Lightsmith, and Steely Dan!

The art is handled mostly by Mike Ploog. Ploog, a former assistant to Will Eisner, was still new in comics at the time but had already made his mark with Werewolf by Night and The Monster of Frankenstein. His work on this series is my favorite from that time, though, his layouts offering an animation feel and his faces really highlighting the personalities of the characters.

At one point, he’s joined by and then replaced by Tom Sutton, and while one is jarred by the transition, Sutton also offers up some of his best work. Towards the end, it’s the clean lines of the Hulk’s favorite artist, Happy Herb Trimpe, that finish out the series.

I say finish out because the series never actually reached an ending. A promised next chapter never materialized so it simply stops rather than concludes. At the time, I enjoyed it so much I actually attempted to write my own finale, a new chapter I called Beyond the Planet of the Apes!

Still, the epic saga contained in the new BOOM! collection of Terror on the Planet of the Apes in Planet of the Apes Archive Volume One is enough to entertain Apes fans old and new as it touches on timeless issues in exciting, entertaining ways reminiscent of some of the best TV anthology series of the 1960s.

In fact, like any good TV anthology host, Rich Handley contributes informative info about the series and its creators up front with more at the end of the book. After that, we head out with a gallery of the original art to those old Marvel mag covers, mostly by Bob Larkin but also including two by Malcolm McNeill and my personal favorite by the great Gray Morrow.

In Doug Moench’s hands, Terror on the Planet of the Apes became something more than just a cash-in on a hot licensed property. It was and remains good comics!

In this article:Book/Comic Review, BOOM! Studios, Comic Books/Strips, Planet of The Apes