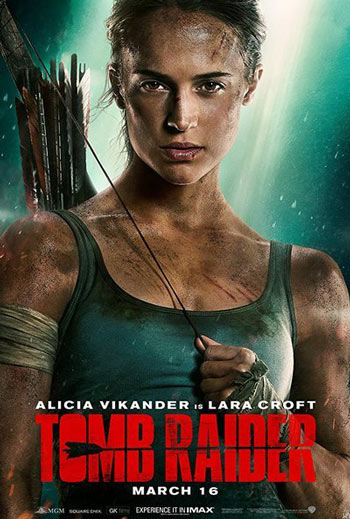 I should have loved Tomb Raider.

Alicia Vikander is a great choice to play Lara Croft. The story isn’t really so complicated as to make it hard to adapt into a pretty solid action film.

In fact, it should write itself.

So why the heck was I left so completely nonplussed by it?

I think I know the answer and it is really frustrating.

The plot is loosely based on the 2013 reboot game Tomb Raider by Crystal Dynamics and released through Square Enix.

Tomb Raider tells the story of the very first adventure of Lara Croft, British aristocrat turned explorer and sepulcher pilferer. Motivated by the loss of her father seven years earlier when he disappeared without a trace for unknown reasons, Lara, through clues left behind by her dad, discovers where he went and why.

Determined to find him and finish what he started she enlists assistance of the son of the ship’s captain her father had hired to take her to a mysterious island, where her destiny as a world famous adventurer awaits.

As a huge Tomb Raider fan from the initial release on the Playstation up through the reboot in 2013 and the last game Rise of the Tomb Raider in 2015, it is still the only game that I have played every incarnation of the game and finished every single one. I fell in love with Lara Croft as a kid. Playing over a dozen games have followed her through adventure after adventure. I even like the dumb Angelina Jolie films as bad and cheesy as they are.

I really want to love this movie.

The director, Roar Uthaug and screenwriters, Geneva Robertson-Dworet and Alastair Siddons, working off a story by Robertson-Dworet and Evan Daugherty definitely got aspects of Lara’s story right. But it is what they don’t do justice that makes the movie so frustrating.

The filmmakers spend the first hour of film telling us an unnecessary plot line that never really shows that she is capable of anything that makes the character of Lara Croft what she will need to be for the rest of the film.

They barely give us any hint or inkling that she is even capable of a tiny iota of the crazy feats of strength, or skills that will be required of her in the rest of the film. She is thrust upon a situation that she is ill prepared for, yet somehow almost miraculously escapes. She all of a sudden has secret spelunking skills, free climbing training and hand to hand combat training.

By leaving out some very essential key elements crucial to Lara’s development when she finally does become the Lara Croft we all know and love it is almost by accident. She succeeds more by luck then skill in all the perilous situations she finds herself in.

That is where the film fails.

I didn’t expect her to just know all the survival skills she has, but we are never given time to see that she can do anything other then ride a bike fast and get her butt kicked in a kickboxing match early on in the film. I felt that even with the two hour run time so many elements of the story seemed rushed and that the ending winds up seeming rushed and almost forced, an augmented Indiana Jones and the Last Crusade, but without the heart or the urgency.

She never really feels like Lara Croft. And this is a big problem.

This movie should be the Casino Royale of the Tomb Raider franchise. Instead, it feels like the filmmakers had a Tomb Raider checklist and were more interested in making sure they had her do all the things we wanted to see her do; Lara falls, hangs from things, climbs and jumps from stuff, gets beat up a lot as well as beats up a lot of people, shoots a bow and arrow, solves giant puzzles, and has major “daddy issues”. Check.

The film is disjointed and uneven at best. Misplaced humor, a back story that is spent too long unfolding, weak bad guys and uneven storytelling, make what could have been a great fun action film into a bungled and mishandled film of mediocrity.

Where it does succeed is in the fast paced action sequences and stunts.

Tomb Raider has some fun, great action sequences when they happen. Vikander is a great physical actress who does so much with what little she is given. She shows great range of emotion and she gives Lara the vulnerability she needs to counter her brash hard exterior. I just wish they had spent more time developing her into the badass tomb raider she is and not some random angry, estranged twentysomthing.

I wasn’t looking for John Wick or Raiders of the Lost Ark, but I definitely was looking for better then the previous two Tomb Raider film and I barely got that. At least in those version of the films I believed that Jolie’s Croft was capable of the ridiculous stunts and fighting she did, over-the-top as they were.

The movie isn’t a total wash though. The action, when it happens is excellent and like I said, Ms. Vikander is spot on and perfectly cast as Lara. At times you feel like you are watching the game happen on the big screen. The only problem is that those times are so few and far between that they are definitely like a mirage in the Gobi Desert.

I think in the end it’s biggest failure, for me, is in its ability to make me not really care either way about this film. I should love it but I can’t hate it. It just is and that is as much of a let down as finding an empty catacomb the promised to be filled with riches.