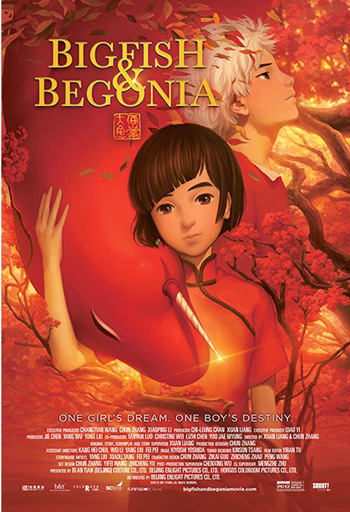 The brainchild and passion project of film director and writer, Xuan Liang and co-written by Chun Zhang, this 12-year in the making labor of love is a spectacle unto itself.

Mixing traditional hand drawn animation along with stunning computer animation the world they have created is as wondrous as it is colorful.

Based on Chinese legends and notable classic stories, Big Fish & Begonia tells a mystical tale of a young girl, Chun.

She lives in a spiritual world that is intertwined and linked to ours. She is one of hundreds of powerful beings. These beings control the tides and the seasons.

As a right of passage, young adults in the land must travel to our world in the form of red dolphins to observe the elements they hold sway over and control to better understand all they command and how it affects the beings of our world.

When they turn sixteen, they are transformed and are sent to observe only, never to interact.

Chun wants more. She is enthralled with our world and explores and investigates everything she can. She unfortunately falls in love with a boy and through a series of terrible circumstances she is saved by the boy but at terrible consequences. Her love and gratitude causes her to sacrifice everything she is and loves to right her wrong. In the process, Chun discovers more about herself as well as learns that the power needed to correct that which she fouled will come at a dear price.

The visuals of Big Fish & Begonia are stunning. The animation style is a a mix of Studio Ghibli and Fantasia, but with a flair all its own. Elegant and fluid, the story of Chun and her mission are so well developed and realized that I was hooked from the onset. I loved all the creatures and the backgrounds. They were whimsical and frightening. One minute I am laughing at fat clumsy rodents and next I am awestruck by creepy one-eyed boatmen. While comparisons to Miyazaki will be hard to overcome, as the film progressed on I found myself letting the movie define its own identity.

This film began as a 7-minute Flash animated short back in 2004. It has taken the filmmakers a dozen years to bring their even larger vision to glorious life. Released in China and Asia in 2016 it is now one considered one of the foremost animated features to come out of China’s animation industry.

It reminds me of the 1997 award winning animated adaptation of Tsui Hark’s live-action kung fu fantasy, A Chinese Ghost Story, and that is wonderful as I consider that to be one of my favorite animated films of all time. Big Fish & Begonia is a true artistic achievement, like some of the great fantasy animated films out there already, I can see this taking its well deserved place alongside films such as the aforementioned Fantasia, Princess Mononoke, and The Iron Giant.

This film is getting a limited release, but I hope that you are able to see it whether in the theaters or via streaming. Big Fish & Begonia is marvelous and deserves all the accolades it receives.  See this on the largest screen possible to fully appreciate the spectacular visuals.