This week we we have the good of the world in front of us.

We’ll put our ego, reputation, frustration and even life on the chopping block if it means the world’s gonna survive. In Wonder Woman, The Demon: Hell is Earth, JLA and Trinity we see it’s not the physical strength or powers that make a hero.

A hero puts it all on the line knowing it could cost them everything but do it anyway. 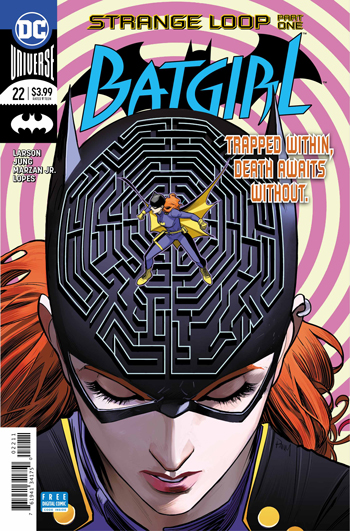 Burnside’s adjacent to Gotham. It leaves them open to many of the same problems, like thugs with high-tech weapons.

Unfortunately when they’re off the clock, some of those criminals bring them home for personal matters as well.

Batgirl’s just in time to stop one from blasting his ex-wife and children with a dangerously futuristic science pistol.

She takes the full blast bodily for the family, protecting them with sheer willpower and the perp is taken away by the police.

After that though things don’t feel – exactly right with Barbara.

Her head won’t stop pounding, and life is pulling into stranger and stranger directions.

What was in that gun? 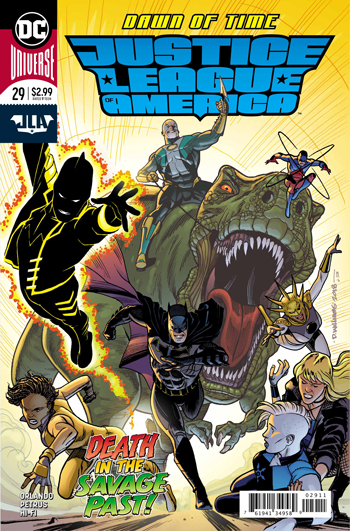 Ahl lies dead and bleeding on the ground. I guess that means no more superheroes, comic books are over.

Juuust kidding. The past-trapped JLA still have a chance.

Aztek’s suit vibes with Chronos’ power, temporarily protecting them from the rewriting of reality.

If they have any chance of changing it back before the cement of time sets they’re only going to need to defeat an endless horde, a tireless unbalanced villain, and protect the body of Ahl so they can somehow make him not dead.

All of this with no equipment or backup. 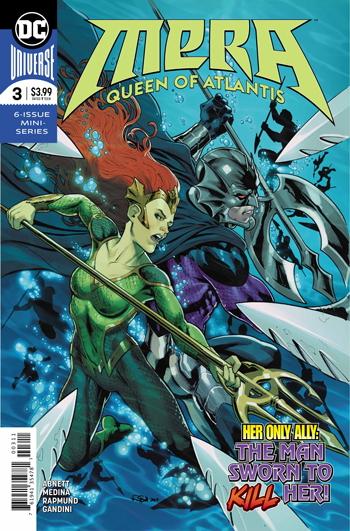 With the fateful decision to defy her programming and not kill a person she gained love, perspective, and a peace she hadn’t known existed.

At the present though, Orm holds a spear tip to her throat. The family that’s started to make this tin soldier (not literal, that would be inconvenient underwater) feel feelings, are running up to stop him. Orm is new to people caring about him, and sharing, and having a family. He doesn’t understand why Erin and Terry are hurt and feel betrayed by all he’s kept from them.

Maybe putting the weapons and powers away (temporarily) and using words can give them a new direction, one so unthinkably crazy it might even work. 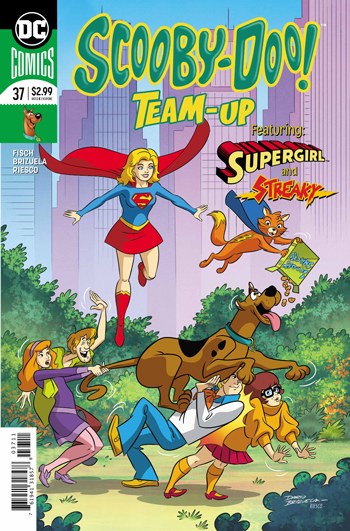 The Scooby gang is called to Midvale by a good friend in trouble.

Supergirl’s being haunted by everyone she left on Krypton! There’s also the small matter of her cat sometimes flying, but ghosts are the more pressing matter.

This issue has a lot of dramatic (literal) ups and downs and it makes the interesting storytelling choice of translating Scooby’s speech from “barking” (after Streaky enters the issue). We get to read his thoughts without his distinctive accent, it’s at least a neat experiment.

Supergirl is so worried (and trusts them enough) that she’s completely candid about her secret identity and origin. Between the five of them (and Scooby and Streaky) they can get to the bottom of this strange spooking. 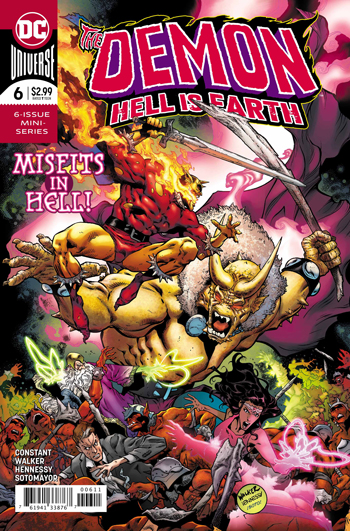 Final issue here, and don’t forget this is playing by Vertigo rules, nothing and no one is safe.

The world is on fire and people turned into demons are running rampant.

Belial stands gloating over our four “heroes” and worse yet, they’re the literal last four beings on Earth left with any chance to defeat him.

Belial grabs the spectral Jason Blood in one hand as Merlin lies dying on the ground. Everyone is going to fight hard, dirty and to their last drop. This is not going well, and it’s a fair chance that named characters are going to die.

Look forward to an exciting crescendo! 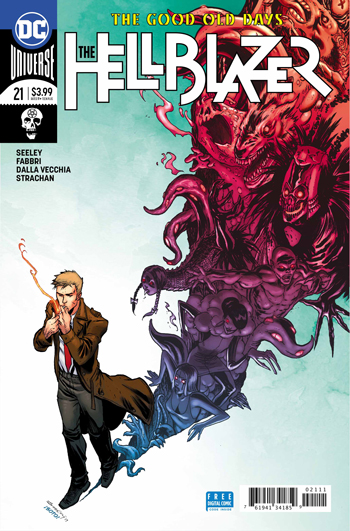 After such an exciting action filled issue last month what would you least expect?

This one’s packed with story and character development! (and violence too, this isn’t a coffee clutch title)

The Day brothers continue their plan to bring back their third (using the leader of the Youngers gang as their meat suit), but as they proceed it’s starting to become apparent with Burke that a stay in hell comes complete with some tricky PTSD.

The now headless street gang takes their frustration out on John, and Huntress might not kill him.

He’s beaten, bloody, but mostly annoyed. Constantine need all these fools out of his hair to get to Margaret in time, something is going really wrong fast.

(There is a second, hilarious cover for this issue in honor of Action# 1000. I definitely suggest you get a gander of the saddest Superman cosplayer I’ve ever seen) 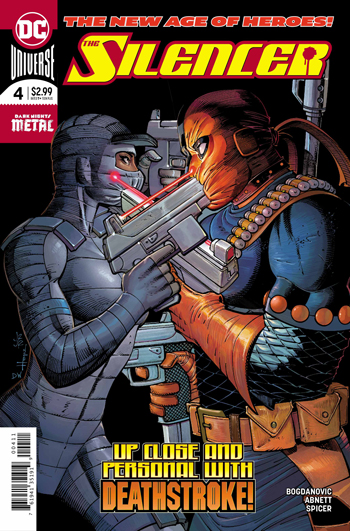 When you have a long proud(?) history of killing for peace (It’s how Leviathan sells their cause) you’re bound to make some enemies.

Honor had the cliché “one more mission” speech sold to her by Talia five years ago so it seemed as clean a cause as you could hope to end your career on.

An accountant for Leviathan is planning to leave the organization and hand everything damning to the authorities.

If he exposes them all, Honor will never get a chance at that “normal” life she’s so close to winning.

Back in the present, Honor has a great support net both at home and in her temporary return to work. Ben and Blake give her a touchstone, Aftermarket gives her the advice only a good friend can.

Like when he asks her why she’s never questioned the intel Talia tells her, her future might depend on it. 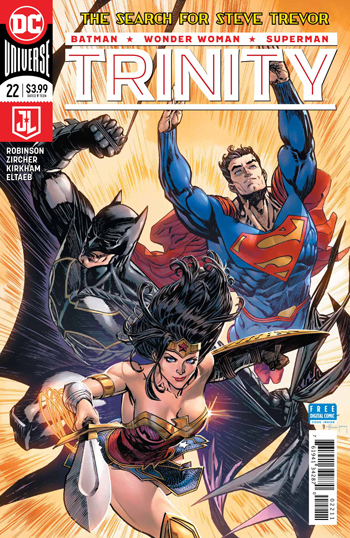 If it wasn’t clear last issue, Deimos had help from this side.

Those mysterious dead humans in Skartaris were employed by Blue Strike Security, a private military group on the fringes of legality.

They were setting up a peanut butter and chocolate deal (magic and high power weaponry, two tastes better together!).

He stands smug above Batman and Superman as they’re crushed by magical tentacles. He laughs when Wonder Woman tries to get through with memories of love to the be-monstered Steve Trevor, even as he mindlessly tries to smash her. He sneers at the Warlord as his army stands behind a sealed magic portal. They can only watch as Deimos tortures the Trinity.

If all these annoying people would just hurry and give up, Deimos could get on with taking over the world (or two). 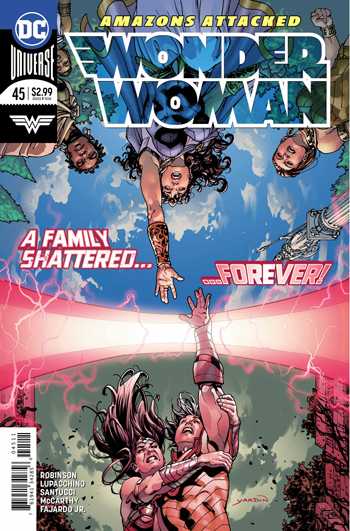 Amazonian Parademons swarm out the portal, you don’t want to kill them (five minutes ago they were Amazons), but letting them kill you isn’t an option either.

Steve Trevor, Wonder Woman and the rest feel out-routed. Darkseid was able to take into account all their steps to this point, and accomplish seemingly effortlessly a feat Wondy’s been struggling to do for months. It feels defeating.

But then, something you never expected happens!

Jason has a good and selfless idea. Don’t you do this Mr. Robinson, don’t make me like this character down here in the 11th hour.

But the power of love has done stranger things, it could even spur character development.