Comic books create a reality where anything one can fit into a blank page can exist.

This week so many flavors of weird are on display. Between Sasquatch Detective holding onto it’s slapstick while playing it straight, Nihilist kid terrorists in Green Arrow, the wonderfully over the top villain of Curse of Brimstone.

Have fun and remember to come up for air. 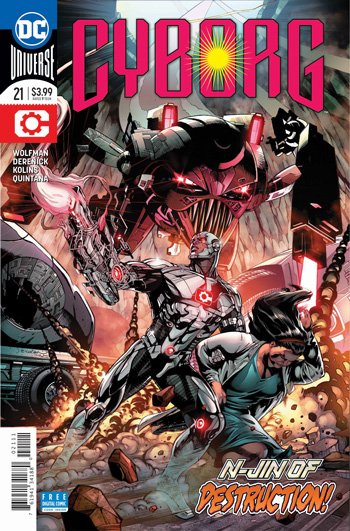 We embark on a new arc here.

A month ago a mech-suited warrior fails his scary samurai sensei, but it’s the samurai’s assistant made of darkness with glowing glasses-eyes who spooks me more.

A large, person-piloted flying robot is pursued by smaller red robot-piloted robots (the point of that?).

Cyborg fights them off and brings the tech home to investigate further.  An action that I’m sure won’t bring chaos to his doorstep as both sides try to recapture the robot suit.

Plus, not the only time this week you’ll see Cyborg’s robot guts hanging out. He needs to find safer hobbies. 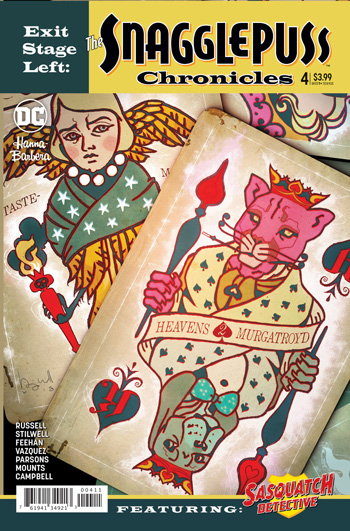 A less ambitious book would place this at the fifth of six chapters.

Action ramps up, traps are set (and sprung) hearts are broken as well as faces. The deepening of the opposition’s backstory probably wouldn’t have happened until the story’s last five pages if we were in the hands of a hack.

But ambition is a strength neither this team nor their main character lacks.

Ms. Allen visits a school and has a hard time selling propaganda to children who insist on asking inconvenient questions. The abject nihilism of the people she works with instills no comfort either.

In the meantime play preparation muddles along, but both sides of Snagglepuss’ personal life insist on him letting them in more.

Huckleberry Hound is uncompromisingly in love with his horse cop. So much happiness here is soap-bubble delicate, and yet to keep their own some feel they must attack others.

Darn this book makes me sad but in the best way.

Sasquatch Detective makes me wonder. This third installment changes up their genre from goofy gag to more subdued dramedy.

With a couple odd (visual joke?) goofy art choices the visual style has become richer and more consistent. It still feels like it wants to be animated more than be a comic book, but at least they’re making an attempt at a continuing storyline. 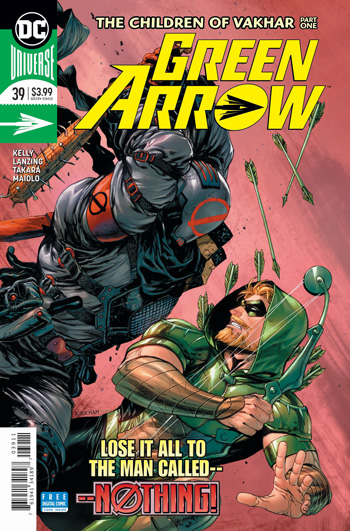 Oliver needs something good and simple to do to clear his head after the trial (and family face-downs).

How about humanitarian work?

Everyone loves not starving!

He goes into a country that was torn apart by Deathstroke six months ago and never recovered.

His company’s been trying to get resources to the victims but shipments keep getting hijacked by warlords and the like.

But as soon as they get there, the helicopter’s blown up (leaving Ollie alone) and the locals take the food, supplies and such to the terrorist holding their kids.

Is this an enemy neither Oliver or Green Arrow can defeat? 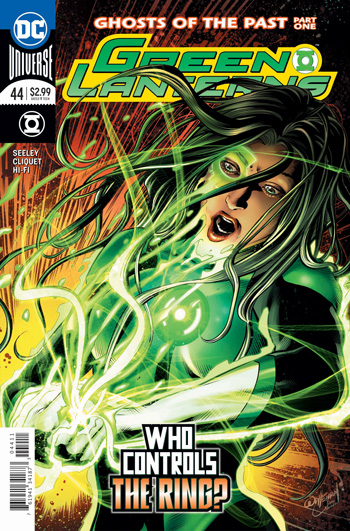 Jess speaks to her counselor/confidant Grace about the night of the hunting trip.

The hole in her memory angers her but she’s accepted it.

Called to duty, Jess is alerted that Singularity Jain’s reappeared.

They corner her on a sentient robot world where a sad-sack ex-weapon with PTSD is fighting to keep custody of his daughter.

Jain offers him the standard deal, but Jess and Simon burst in before he accepts. Jain (in custody) lays the “we have so much in common” line on Jess.

A comparison of inner darkness and history (mostly to catch up the reader) leads to Jess supposedly rejecting her outright, but this is part one of this new wild arc. 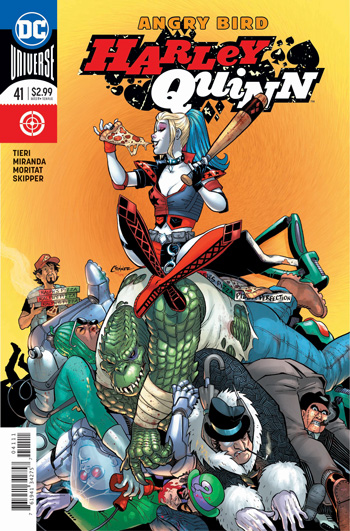 A funny, but unnecessary fight starts out the book; Mad Hatter’s having all the book’s secondaries fight each other and I just question… how?

Has he upgraded to a wifi brain washing hat that needs no transceivers on his subjects?

To answer last issue’s question, Croc is helping Harley take back (her friends and) Coney Island.

In fact this is the big awesome fight issue with a flavor for every type (fistfight? kaiju battle? snappy dialogue? all here).

The good guys win and friendship brings us all back together (maybe even gaining an ally from the other side), there’s so much happy end here it gives us a good breather before whatever hits us next. 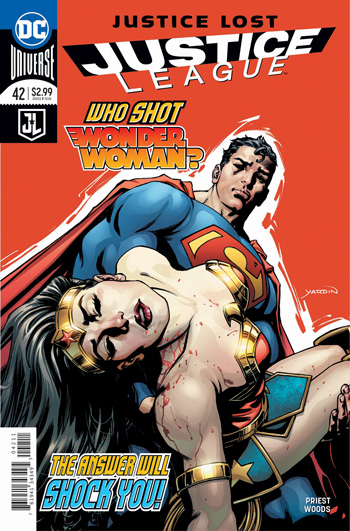 We continue our story of many parts, now with flashbacks!

Wonder Woman admonishes herself for not blocking the shrapnel that bounced off Superman, slicing her throat.

The strangest event of this issue is when Slade Wilson introduces himself to Cyborg.

It’s too difficult at this point to keep up with what’s currently cannon and what’s not, but Deathstroke was introduced on the cover of New Teen Titans #2 (38 year old spoiler) so… comics are weird. 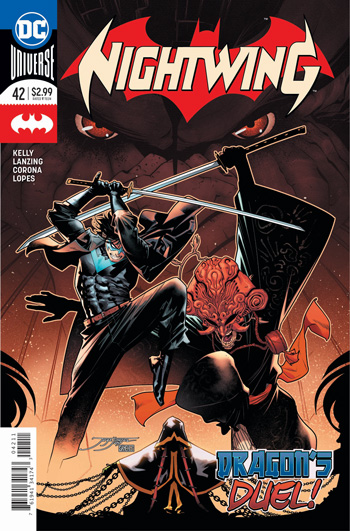 A one-shot fable for us now.

Thoughtful and almost sweet, feels like we’re back to pre-New 52 Damian emotional development.

Nightwing drops what he was doing (recuperating) to save Robin from a Tokyo gang that thought it would be an awesome idea to sacrifice the lad for power.

Dick objects to this on many levels and goes “Kill Bill” through their ranks with an almost storybook sensibility.

Too bad the ones who could use this lesson the most are left broken and bleeding (it’s not the best way to take in information).

Thank you creative team, it was a lovely palate cleanser after the heaviness of the last arc (and maybe an aperitif for the next?) 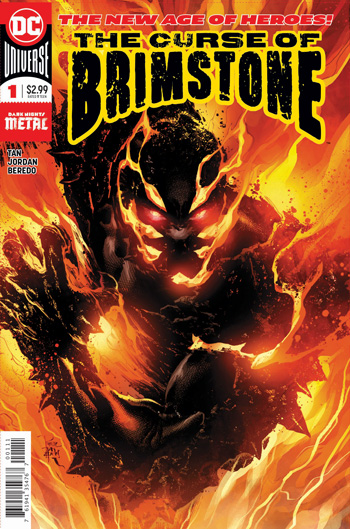 “By the prickling of my thumbs”- is not a phrase used in this new series, but it might as well be.

Great atmosphere in this book, you can feel the crumbling hopelessness of this dying town and the people held within it. The few characters we meet bounce off each other to reveal why you’re gonna care about them.

It’s no spoiler to say a devil’s deal will happen here.

Who’s going to get hurt and what will be destroyed? Who might use this disaster to their advantage?

It’s not a new story idea, but I already care about Joe, Annie and sweet Mrs. Gearheart. That the art is so wonderfully Sam Kieth/Vertigo-esque is just icing on this little paincake. 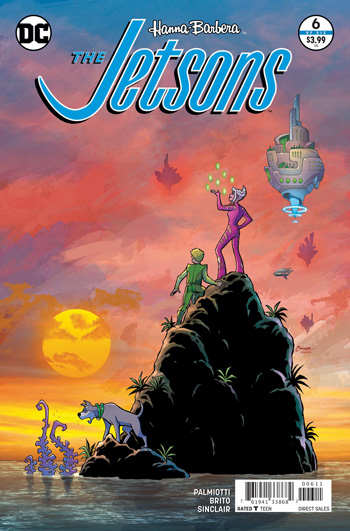 I know of people who read the last pages of a book before the rest, to gauge if it’s worth it.

Even if you’d read issues one through five and tried that on this latest issue, you’ll be as lost as a distracted kid at the mall.

Jane wakes up from a flashback/bad dream. Everyone is sad about George/the planet’s upcoming destruction.

Meanwhile George and Rosie talk to the alien that saved their lives last issue.

It also comes from a culture that wears skin tight clothes on it’s humanoid body (why change the running theme now?) and it fills them in on ALL the hanging plot elements.

The adventure closes leaving the story open for further adventures…

This writer is capable of good work, can we not and say we did?