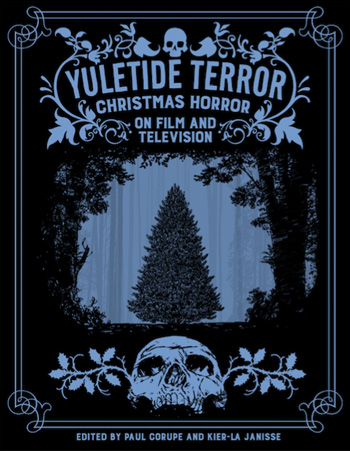 Kier-La Janisse’s House of Psychotic Women is one of the best books which examine the horror genre I’ve ever read, and I’ve read a lot of them. Women is an extremely insightful and intelligent look at the genre through a bracingly autobiographical lens.

When I heard about Yuletide Terror, a collection of pieces by various writers on Christmas-themed horror, I was excited. When I saw that Janisse co-edited the book and was one of the contributors, I knew it was a must-read.

The first chapter is full of many reliably sharp and thoughtful observations by Stephen Thrower on what is often considered the best film of the subgenre, Black Christmas (1974). Especially interesting is his assertion that director Bob Clark and screenwriter Roy Clark develop “the idea of coldness with clever stylistic decisions…from sound mix and mise en scene to the traits and attitudes of the lead characters”.

No book on the subject would be complete without discussing the notorious Silent Night, Deadly Night. Michael Gingold offers a compelling history of the film’s production as well as the controversy and mass protests from parents and hand-wringers over the film’s TV commercials and print ads, which depicted Santa Claus as a murderer. Gingold also covers the film’s four sequels, one of which – cult director Monte Hellman’s Silent Night, Deadly Night: Better Watch Out! – is also discussed in Caelum Vatnsdal’s interesting take on experimental filmmakers’ tackling of Yuletide Terror.

We’re also treated to an interview with actress Gilmer McCormick, who portrayed Sister Margaret in the original Silent Night, Deadly Night. She shares her memories of working on the film and recalls her reaction to the protests. It’s fascinating to note her other claim to fame – as part of the cast of Godspell, from its off-Broadway run through the film adaptation – was likewise protested by righteous moral groups!

Florent Christol’s intriguingly titled chapter, “’Christmas Evil’ and the Cultural Myth of the Foolkiller”, situates the endearingly oddball film within the subgenre influenced by the “foolkiller” story; films such as DePalma’s Carrie, Massacre at Central High, and Willard belong in the same category, Christol argues, citing Poe’s short story, “Hop-Frog”, as an early example of this type of tale.

Amanda Reyes interviews Lewis Jackson, the writer/director of Christma Evil, who talks about, among other topics, his casting of Brandon Maggart, his subsequent friendship with outspoken Christma Evil supporter John Waters, and the genesis of that mind-boggling final shot.

One of the pleasures of books like Yuletide Terror is a writer offering an incisive analysis of a work that may cause the reader to reassess a negative opinion about it. Such is the case with Andrea Subissati’s examination of the 2008 film, The Children. I was underwhelmed when I saw the film a decade ago, but Subissati makes a strong case for The Children as a solid entry in both the Yuletide Terror and Killer Children subgenres. Of particular interest is a discussion of the “Santa Lie” parents tell their children as potentially being psychologically toxic.

Another pleasure of collections like these is being introduced to works the reader either just hasn’t seen or read or with which he/she was completely unfamiliar. As a lifelong horror nut, I’m a bit embarrassed to say there are a fair amount of films covered here I have yet to see (3615: Code Pere Noel, Cash on Demand, The Ghost Story For Christmas series) and a few I’ve actually never heard of (Petit Pow! Pow!, Noel, Robin Readbreast).

There are other terrific chapters on the Krampus legend and its depiction in films, the darker aspects of the Nativity story as presented in horror films, the Santa/Satan connection, and a solid overview of Dickens’ A Christmas Carol in film.

There are 25 chapters in all, as well as a collection of cool artwork/posters and a seemingly thorough “Compendium” of Christmas horror films.

This deserves (perhaps demands) to be on the shelf of any self-respecting horror enthusiast, as well as open-minded readers with a strong interest in or love of all things Christmas. Very highly recommended.