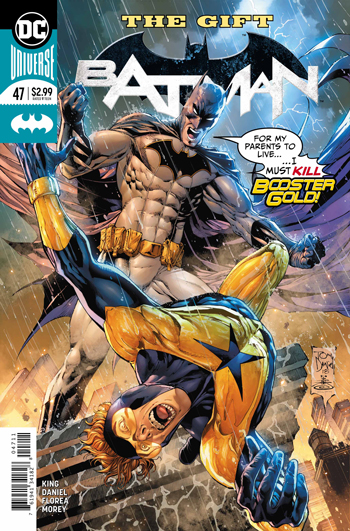 Well, this one hit me hard. I didn’t expect the ending of this to emotionally land the way it did. But when I finished this issue, I actually sat in silence for a few minutes. It’s actually that powerful of an ending.

Tom King has been doing superb work on this title as of late, and I’m glad he found his stride. He hits all the right beats in this storyline and it’s a powerhouse of a book that packs a wallop.

This is the third part of “The Gift.”

In it, Booster Gold decides to give Batman a gift that goes horribly wrong. So, a time anomaly forms. It leads to a nightmare world for Bruce and Selina.

The way King writes Booster Gold is admirable. He’s sort of a Shakespearean character here, full of mischief. He also is very far out and funny.

One of the best scenes in the book is when Booster winks at the reader and Bruce notices.

King keeps the entire issue playful and creative. There’s a crazy, subversive energy throughout. The best scene, besides the ending, involved Booster shaving his insane looking beard. It’s a one page process but man, it’s so well done. Every panel has energy and style.

That’s also because King’s collaborator is so damn strong. The panel layouts and “acting” Daniel gives the book and the characters is fantastic. Every moment counts and it feels almost like music when these two creators are doing their thing. Just watch the scene where Batman and Catwoman’s heads just “pop!” Its crazy good.

But all the fun lead to those last few pages. This storyline has had some emotional moments beforehand. Issue 46 left us with a pretty devastating scene. It doesn’t compare to this. This will hit you hard and you will remember it.

I wanted to point out the excellent cover for the book too. It’s a very “Pre-Crisis” cover that says so much about the issue with one image.

King has taken a three part story that seemed like a throwaway and instead made it count and count big. I’ll never forget this storyline. The dialogue in the last scene also chilled me to the bone. It will do the same for you. This is a top notch comic book. Recommended.