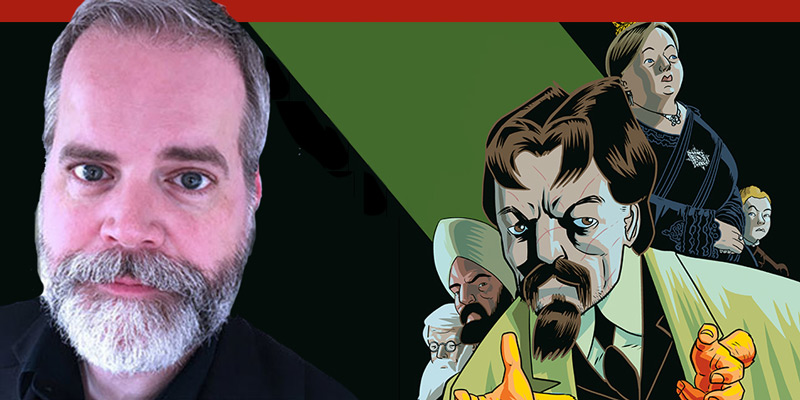 You might know the name Chris Roberson from one of his novels or short stories.  Or perhaps you recognize it from his publishing venture, MonkeyBrain books.  You might even know it from his comic book work for such publishers as Dark Horse, DC Comics, Dynamite Entertainment, IDW or BOOM! Studios.  Or you might even recognize it from the co-creator credit on the CW series, iZombie.

In other words, the man gets around.

His latest project is a return to Mike Mignola’s Hellboy Universe, writing the new mini-series, Witchfinder: The Gates of Heaven with Mignola and featuring art by D’Israeli.  In the new story, “A series of occult events mystifies the man known as the Witchfinder, but even more surprising is the revelation that he is not alone in exploring the paranormal in London. When a personal invitation arrives from the palace, Sir Edward Grey is pulled even deeper into underground supernatural exploration alongside new allies in the race to stop a mad scientist from destroying London in his pursuit of mystical power.”

Chris took some time from his very busy schedule to discuss the appeal of Witchfinder, Hellboy’s Great Uncle Simon and the appeal of writing comics.

FOG!: Sir Edward Grey serves as Queen Victoria’s paranormal investigator in 19th century England and has appeared as a background character, initially in Hellboy before receiving his own solo adventures. You wrote that Grey is your favorite Mignolaverse character and the comic featured everything that you were obsessed with. What do you love about the Witchfinder and his world?

Chris Roberson: I was intrigued from the very beginning when the character was mentioned briefly in the first issue of Hellboy: Wake the Devil, but when we got a fuller introduction to him in Witchfinder: In The Service of Angels, I was hooked. I’ve always been a fan of the Victorian era, because in many ways Victorian England is the beginning of the modern age, or at least the most recent historical era that is very recognizable to a modern reader.

Many of the genres we’re familiar with today in popular entertainment had their origins in that era, and people in Victorian times dealt with issues like expanding roles for women to the tension between innovation and tradition that still resonate with us today. But it’s still far enough removed from us that there’s a lot of creative potential in taking a story idea that might seem somewhat ordinary in a modern context, and seeing what new twists are possible when setting it in the Victorian era.

The new mini-series, Gates of Heaven is your second time writing the character. Is the experience different now that you’ve tackled the character and his world before?

It’s a little different tackling him the second time around, in part because I’ve written a number of other historical period pieces set in Hellboy’s world in the meantime (Hellboy And The B.P.R.D., Rise of the Black Flame, Rasputin: Voice of the Dragon, etc.), and so there was even more potential to introduce connections between Sir Edward’s Victorian era and the rest of Hellboy’s world this time around. And considering that the first three Witchfinder series were all scripted by different teams, this will be the first time that the same writers handle two Witchfinder series in a row, and so there was the opportunity here to really establish a tone and a status quo that we can mix up and play with going forward.

How did D’Israeli come on board as artist?

From the earliest discussions about the ideas that eventually developed into The Gates of Heaven, we knew that (a) the story would be set in Victorian London and (b) that there would be a steampunk-tech aspect to it. And D’Israeli was the first name I suggested to Mike when we started talking about who might handle the art duties, as I knew that there was no one better equipped to handle that setting and era while also suited to tackle the steampunk vibe we were going for.

And thankfully I was right, as the pages have turned out looking amazing!

Having not read previous Witchfinder arcs, the first two issues of this series seemed to have a lot of word building with both The Foundry and the Heliopic Brotherhood of Ra. Was that one of your goals?

Each volume of Witchfinder is designed to be stand-alone, so that it can be picked up and enjoyed by anyone who hasn’t read any of the previous stories, and so we take pains to introduce any concepts or characters in a way that new readers can approach.

At the same time, though, we are always looking for ways to expand that breadth and depth of Hellboy’s world, and introducing new characters and concepts to fit in alongside the established stuff. So in The Gates of Heaven we are reacquainting readers with some of the previously introduced Victorian-era stuff while also bringing in some new stuff, often with connections to the larger Hellboy world.

And definitely, one of the things that we hoped to accomplish with The Gates of Heaven was to get across the idea that there is a lot more going on in Sir Edward’s era than he previously suspected. 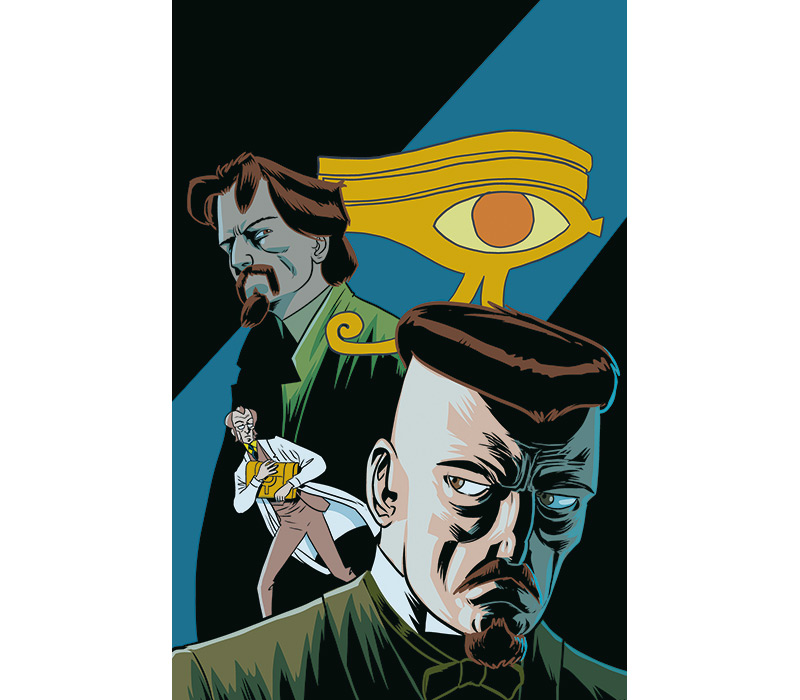 In the first issue, we meet the British Paranormal Society and its members including Simon Bruttenholm. Is he the father of Trevor? Was this your idea or Mike’s to introduce him?

Simon Bruttenholm is actually the uncle to Professor Trevor Bruttenholm, the man who raised Hellboy. Trevor’s uncle has been mentioned a few times over the years (in the pages of Hellboy: The Companion, for example, and in a conversation between Trevor and the exorcist Ota Benga in B.P.R.D.: 1947), but aside from a glimpse in a black and white photo he was not seen in person until Rasputin: Voice of the Dragon, which is set in the early days of WWII, where he was named for the first time. It had been established that Trevor’s uncle had known Sir Edward Grey, but it was my suggestion that we could show their first meeting in The Gates of Heaven.

As both an author and publisher of prose before working in comics, what about the medium do you find so satisfying?

As a writer it’s nice to work in a visual medium, where things can be communicated through the art that might be difficult to tackle through words alone. But more than that I like the collaborative aspect of working in comics. Writing prose, I’m responsible for everything that is down on the page, and if it succeeds or fails it’s all down to me. But in comics, I’m only one of a group of collaborators, and I’m fortunate enough to work with some of the most talented artists in the industry, who can take my humble words and turn them into something much better than I’d be able to accomplish on my own.

In addition to various miniseries set in the world of Hellboy, I’m doing another work-for-hire comic gig that hasn’t been announced yet but which is really cool, and in my free time I’m working on a YA prose novel.

In terms of comics, these days I’m reading a lot of All Ages and YA original graphic novels (I’ve recently enjoyed Vera Brosgol’s Be Pepared, Molly Ostertag’s The Witch Boy, and Jen Wang’s The Prince and the Dressmaker), but I recently finished rereading all of Cullen Bunn and Brian Hurtt’s The Sixth Gun, and eagerly await each new issue of Kieron Gillen and Jamie McKelvie’s The Wicked + The Divine, Kurt Busiek and Brent Anderson’s Astro City, and Brian K. Vaughan and Cliff Chiang’s Paper Girls.

In terms of movies, I’m still reeling from Avengers: Infinity War and looking forward to watching Solo in theaters in a few days. The TV shows that have been occupying my attention lately include Legion, Westworld, Atlanta, and Barry. In my downtime I’ve been rereading all of Terry Pratchett’s Discworld (I’m thirty books in and only have eleven to go), rewatching all of the Tom Baker-era Doctor Who, and my musical obsessions of the moment are The Regrettes and Jay Som. 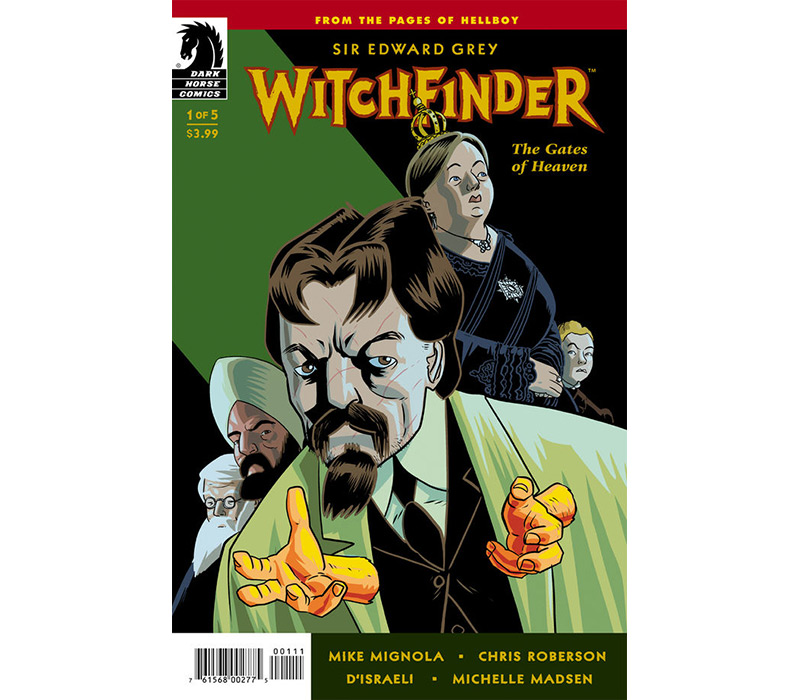 Witchfinder: The Gates of Heaven #1 is available now
in comic book stores and via digital.