Welcome back to Graphic Breakdown.

It’s Wednesday, and that means only one thing! 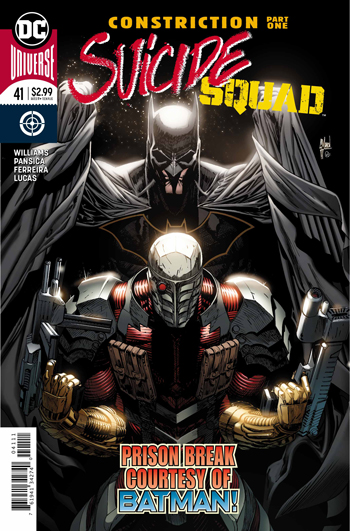 I’m going to say something I haven’t said in a long time in this column: I liked this issue of Suicide Squad.

What?! How did this happen? I’m not sure myself.

Let me be clear: This issue was typical of Rob Williams and the way he writes Suicide Squad. It’s loud. It’s bombastic. It’s a hell of a lot of fun, however. Sometimes, things are just meant to be enjoyed.

This issue starts off with Deadshot in prison. Eduardo Pansica has become one hell of an artist. That first page is just great and the body language he draws onto Deadshot is unbelievable.

Well, Batman gets involved and decides to break Deadshot out of Belle Reve! Then, the whole thing looks to be the start of a buddy road film. The two have to go save Deadshot’s daughter from Kobra! All this and Amanda Waller wants Deadshot back at any cost!

The story works best when it’s the Deadshot scenes with Batman.

The two have a nice back and forth. Williams handles them both with flair.

By contrast, the Kobra scenes are incredibly silly and don’t do much for me. Except make me laugh. It makes the issue a little uneven.

I do like the art though. The action scenes are wonderful and Pansica has a great sense of pacing. If Williams can cut down the sillier elements, this book could be great. Hopefully, this new storyline continues to be this good. 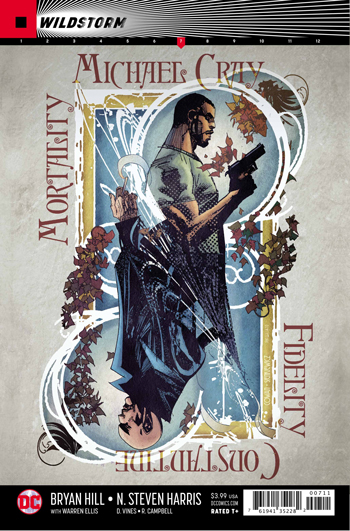 This has been a pretty damn good spinoff from the main Wildstorm title. Bryan Hill really delves into the psyche of Michael Cray and digs deep. I’ve been enjoying his take on Cray very much.

Michael Cray has a new target: A scientist in London who is crazy and into magic. His name is Dr. John Constantine!

Cray is on his way to get him. But Constantine may hold the key to freeing Cray from the consciousness inside of him. What will happen?

This is great from the very first page. We are immediately introduced to this version of John Constantine. It sets the mood perfectly. In this reality, he moves and looks a bit like the Constantine we know but mixed with Nikola Tesla and Lex Luthor. It’s just a great spin on the character.

Then, we see Michael Cray at the end of this rope. Hill makes Cray’s struggles real and heartbreaking. You emphasize with him completely from his very first scene.

The story then follows Cray going after Constantine. It goes into some pretty dark places for a comic book too. I absolutely love that.

The art by Harris is perfectly suited for this book. It’s well done and emotional throughout. This issue is quite good and I may go back and read the entire series up to this point. Well done. 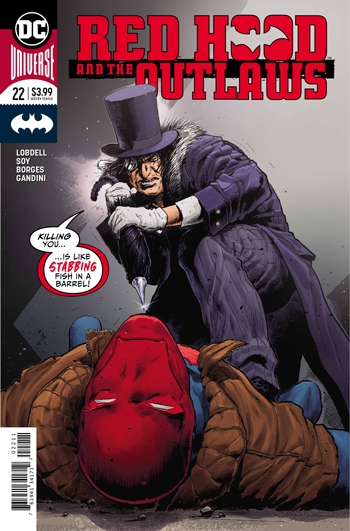 Man, do I enjoy this book.

Scott Lobdell has really done an excellent job here and I have been loving it. This is another fine issue he has written.

It starts off with a bang! The opening page is Red Hood and the gang in a big battle with The Penguin. Lobdell gets us right in the middle of the action and the audience needs to catch up. I just loved the way he did that.

It seems the Penguin has redeveloped a waterfront property into a new boardwalk attraction for children of all ages. Of course, it’s the Penguin running things so it’s not exactly a legitimate business.

Also, Artemis pays a visit to Lex Luthor to figure out what the side effects might be to Bizarro’s revival. The tension between these two is truly crazy.

The rest of the issue is strong. The best scene comes at the end with a moving moment between Bizarro and Jason Todd. It’s stunning and emotional and catches you completely off guard.

The art by Soy is tops. He conveys emotion in every panel. He’s incredibly underrated. Also, the cover by Guillem March is powerful and is worth a mention. A very good book overall. 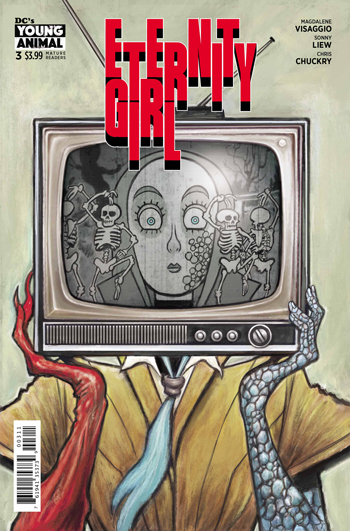 This is another feather in the cap for Gerard Way.

The Young Animal line of books at DC Comics really is a great line to read. They really are what Vertigo used to be for DC: a place where creativity happens.

And this book certainly is creative!

On the outside, it seems to be a rather silly book. Eternity Girl and Madame Atom are on their way to the mysterious Shining Tower. It sits on the intersection of being an nothingness.

Yet, Visaggio makes it more than that. These two are getting pursued by unknown forces. And is this world real? Visaggio asks these questions and more. The last scene of the book takes place on a rooftop that raised more questions for the reader than ever before.

And that is a truly great thing.

Sonny Liew is an excellent artist for the series. His style seems simple. But it’s deceptive. His design work is awesome. I love the way he does costumes. And I loved his take on the Shining Tower. It’s simple yet chilling.

I need to read the whole thing to get the big picture. I feel reading the book as a whole will benefit the reader. But right now, this is another compelling title from the Young Animal line of books. 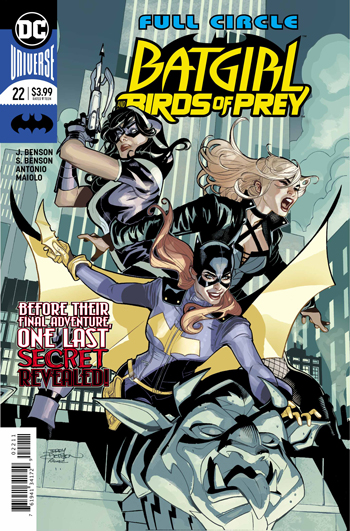 This is the final issue of this series. Sadly, I could see it coming from that very first issue. There was nothing that really set it apart from the pack that made it stand out.

And that’s a shame, as I feel that it could have been great.

This issue starts off with an interrogation scene gone wrong. It was a snooze. There was no real drama leading up to it that was compelling so it feels rather generic.

Batgirl and Black Canary must find Huntress and save her from the Calculator and Blackbird’s plans.

Can they save her?

And can they figure out the answer to the question “Who Is Oracle?”

The answer is pretty much a yes to all of those questions. It’s very dry and dull. The Bensons don’t do much to make it compelling.

The art is okay at best but it’s rather generic.

I hope everyone from this series moves on to other things that are stronger. This is one title that really needed to be laid to rest. 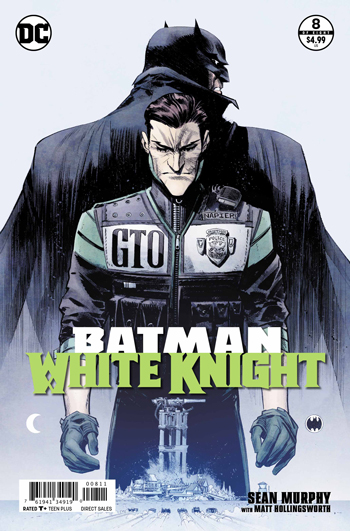 Sean Murphy devised one hell of a comic book here. He decided to do a version of the Joker who takes pills and becomes sane again. That in turn, makes Batman the “villain” of the series. And so off we go!

This is the final issue of the series. It’s been a very compelling ride thus far, and this is a fairly good issue. The one thing that bothered me, is that the ending wasn’t as satisfactory as I would have hoped.

This issue starts off with Jack Napier and the Batman family trying to stop the villain known as Neo Joker.

Neo Joker has Gotham City under her thumb. So what do they do? They make an all out assault onto the Neo Joker!

And there’s some great stuff.

Watching The Joker alternate from Jack Napier to the Joker is great.

We get to see the torment behind the smile and Murphy does a good job. He also gives the supporting cast personalities.

Murphy does a great job writing the Joker and making him a sympathetic character. At one point in this issue it looks like The Joker is sacrificing his life for the greater good. It’s handled well and you actually care about him.

Murphy also handled the psychological ramifications of what a “real life” Batman might do to people. His writing raises a lot of interesting points.

The downside to his writing is he didn’t know how to end on a strong note. He also did a few things that made little to no sense (why is Duke Thomas as old as he is here? What happened to Jason Todd?). He also leaves a lot of plots unanswered at the end and it’s annoying rather than clever. He might be doing a story in this universe later on, I’m figuring. The last moment is pretty obvious and a groaner actually.

Murphy is a great illustrator though and can tell a story like none other. I think with some more development, Sean Murphy will be known as one of the “auteurs” in comics.

I’m looking forward to see where he goes next.