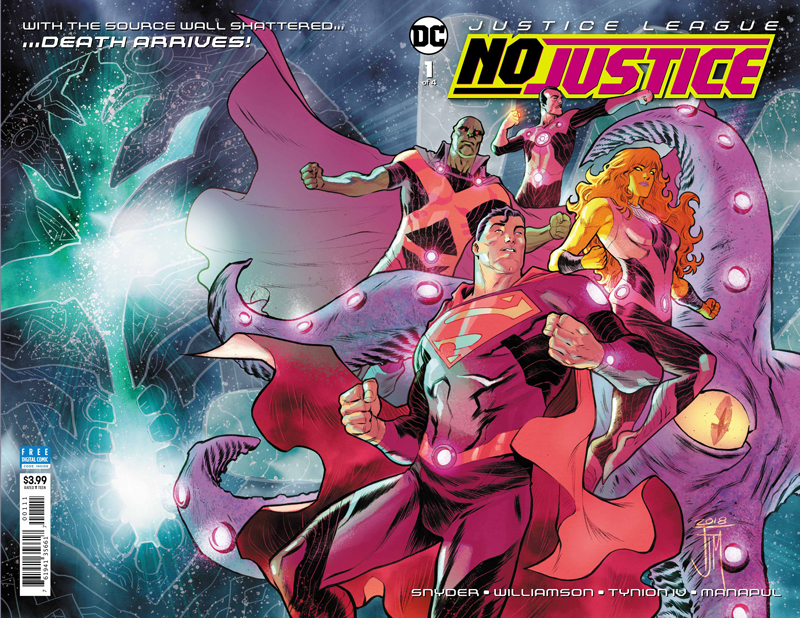 Justice League: No Justice hits the stands this week, the long-awaited prelude to a new era of the DCU. Everyone wants to know if it’ll live up to the hype. And it does, so far as hype goes. It’s big, it’s bold, it’s creative, it may even be a little brilliant.

Too bad, just out of the gates it also feels maybe just a little bit… forced.

Don’t get me wrong. I really want to like what writers Scott Snyder, Mark Tynion IV, and Joshua Williamson are doing. They’ve earned their shot, and we deserve a new vision of the DC Universe, in step with the new creative talent these three have brought to bear so far. So, I’ll be giving it a chance. We have three more weeks with three more installments for them to really step things up. They may very well. And I’ll be honest, if they manage to just leave me satisfied with whatever justification they spin up that will lead us in to the new status quo, I’ll be content on the whole.

But I’ll be happier if they wow me.

We know that No Justice is designed to shake up and re-arrange the core teams of the DCU. I’m in favor of that, actually. As an old-school Teen Titans fan, toughing it out while Cyborg has been unceremoniously upgraded to original Justice League founder status, while Gar, Kory and Raven have languished in their angsty adolescence has been no fun. To say nothing of the other Titans. All these characters deserve their due, and that’s about to happen. It needs to happen.

Scott Snyder clearly knows that, and he’s taking full advantage of the power he’s created for himself at DC by breaking the universe in his Dark Knights: Metal epic cross-over event. Now he aims to fix things – or at least change them – and No Justice is the tool he’s using to do it. But where Dark Knights: Metal covered six issues with multiple storylines through several titles, this time he only has four issues to work with. And that means he and the crew can’t waste any time getting things done. Or getting things started.

That’s what issue #1 is for, and for all that it relies on some significant contrivance to do that, I have to admit they do a lot to get the ball moving down the field.

First up, we need the players.

Enter Braniac, who shows up suddenly from a world under siege. He needs the Justice League’s help, which he demonstrates by launching an all-out assault on earth’s heroes, apparently in a bid to convince them that in their current configurations each team alone is vulnerable and beat-able. And beat them he does – handily. Which itself is a lot to simply accept. When does Braniac ever win? Even when he wins he doesn’t win. C’mon – this is the Justice League we’re talking about here. Beating Braniacs is what they do.

Nonetheless beat them he does, and then in a smart move that rings entirely true to character, the big brain baddie doesn’t even wait to petition them for the help he needs. He simply takes the heroes he’s decided he needs for his mission and absconds with them into space. Why he doesn’t simply take as many as possible is unclear. Presumably because that’s just not the way the story goes.

And thus, our heroes are literally forced together for the upcoming adventure. Handy. But wait – surprise twist – the select members of Justice League and Titan teams on board find that they’ve been thrown together with an unexpected toss of villains, aliens, and magic-wielders. And all of them have been conveniently arranged into teams of Braniac’s choosing. Thankfully one of the aliens in J’onn J’onnz. Even if the other one is Starro. O-K.

The whole set-up is a little absurd, even for comics. But it’s also the sort of over-the-top outside-the-box thinking we’ve come to expect from Snyder by now. And really, it’s what he’s been tapped to do. Still these sort of remarkable-bordering-on-the-unlikely elements permeate the book. Take for example the fact that all of our heroes have had their costumes swapped out by Brainiac upon their capture, with the result that Cyborg’s metal is now all red (uh), and somehow Batman’s utility belt has been re-created wholesale – in purple. But OK, they’re color-coordinated now. More or less. Really, on some level you get the impression that at some point the creative team stopped caring about such potential hang-ups. You can almost hear them saying, with a shrug, “Hey, the ends justify the means, here – just roll with it.”

And after all, in just a few short pages we have thoroughly committed the League and friends, in a creative blending of two of the main tropes of comics – the team-up and the divided strike-teams. Nifty. Gets the job done.

Next up – the backstory. We already know there’s a great big hole blown into the Source Wall on the furthest edge of the universe. That’s bad enough. The other side is a seething cauldron of… something. Some terrifying, unknown potential force for destruction. (Or, uh, change.) But the events it kicks off within our own universe are, it seems, equally dire. Apparently, four ancient cosmic gods – Mystery, Wisdom, Wonder and Entropy – have been awakened from their eons of slumber here at the end of all things, and are now abroad to fulfill their purpose – first to judge, and then to consume, all the inhabited worlds of the known universe. Bad.

Now forget for the moment that, for yet another time this year, DC seems to be lifting a page directly out of the Marvel playbook, with a cosmic threat that seems – even visually – to be a pretty obvious blending of both Galactus and the Celestials. Never mind that – this is still possibly one of the more brilliant concepts I have encountered in comics. Or at least it could be.

After all, in what other reality but a comic book universe would we find that the four fundamental energies of creation are wonder, mystery, wisdom, and entropy – sounds like a comic book universe to me. And to be sure, they should be embodied and moving abroad in the land as beings of vast unknowable destructive(/creative) potential. As world-building cosmology goes, it doesn’t get more meta than that.

I applaud the concept. It’s got potential, to be sure. Maybe even huge potential. Again though, it remains to be seen what-all exactly will come of this set-up and how precisely DC’s three amigos are going to execute it. Given what we’ve seen so far, things may continue to proceed somewhat wild and roughshod, with everything bent in whatever which way in the service of getting the job done, whatever that is. It’s also possible though that we’ll see Snyder, Tynion IV and Williamson work some real magic in the three issues they have remaining. Maybe both will happen.

It all depends on how much they plan to cram in, and just how much they expect us, their devoted readers, to fill in the blanks. Just as an example, some of these cast members and their team-ups, demand explanation. I don’t imagine I’m alone in that sentiment. But I’ll be looking to see if Snyder agrees. If he does, then I’d say that bodes well for his Justice League run. But I’ll be disappointed if they end up glossing over all of the potentials they’ve set up. I mean it’s fine to be clever – but it’s better to say something meaningful in the process. We’ll just have to see if that’s on the agenda here. Or how much.

At any rate, they’re off. They are not lacking in ambition. And thankfully there’s some good creative foundation at work to match the effort. Aside from the chomping chops in plotting and script – that among other things has left us with one of the most enjoyably unexpected cliff-hangers you can imagine – the artwork of Francis Manapul is excellent as always. I believe he’s even doing his own inking – which by and large succeeds in lending a very interesting artistic element to the printed page. And Hi-Fi’s colors are fantastic. The opening spread of the Source Wall is simply jaw-dropping. I hope these two will have more room like that to spread their wings together.

Three more issues, a universe of surprises in store – if not a more. Hope everyone’s ready.