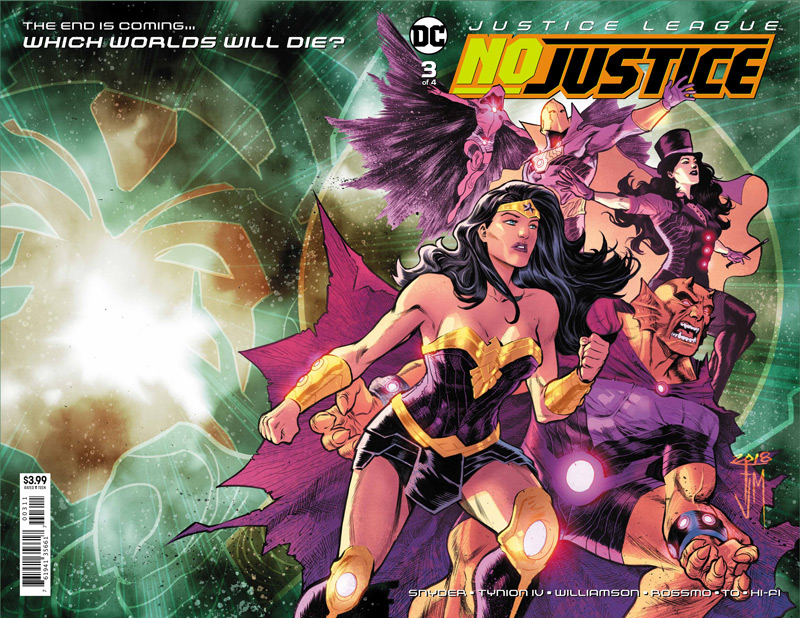 “Either shoot me, Amanda, or give me your radio. I will not let you kill my family no matter how many space gods you threaten me with.”

And the pendulum swings.

In my review of Justice League: No Justice #1, I said the primary thing that would determine whether this mini-series holds up for me, is how well Snyder and his team convince me that what is happening is believable. That’s the defining rule of all fiction: Is what you’re writing something that your audience will accept?

In comics of course, there is wide latitude for what is acceptable. The bizarre, wondrous and incredible are the constant staple of superhero stories.

Even so, there are rules and norms that contain the medium’s best storytelling. Norms that have evolved over time. And there are internal consistencies that all stories need to respect if you’re going to hold the faith of your audience.

There’s been a trend in comics for several years that seems to enjoy pushing that envelope, and Scott Snyder is definitely in the camp of those who like to do that. Much of his style relies on forcing big concepts through the medium and its characters. That works sometimes. And sometimes it over-reaches.

There was always that danger in this series, and Issue #3 of No Justice runs right into it, headlong. I won’t fault it completely. It’s endemic to the story they’re telling really – which was ambitious from the start, to say the least – and also to the shortness of the series – which so far as I can see, was unavoidable.

And if the main criteria, is simply how well Snyder, Williamson, and Tynion IV manage the actual feat of storytelling itself, within the time and space they’ve allowed themselves, then definitely it’s a success.

But do I believe it? Do I accept it? Mm.

Start with the recap. Our heroes have positioned themselves to save the day at each of Colu’s four major World Trees of Wisdom, Wonder, Mystery and Entropy. All they need to do is ‘re-awaken’ the Wonder, Mystery and Entropy Trees and simultaneously ‘dim’ the Wisdom Tree, which in this case consists of the entire world repository of Colu’s vast network of data servers and A.I.s. Better get those zip drives ready Vic. How many impossible things can the League do in one day? Let’s find out!

Spoiler alert: The League saves the day – sort of, or maybe not, there are a few spectacular sacrifices along the way. But it’s a proverbial out of the frying pan and into the fire situation. Because now it’s earth’s turn. And with the League uncounted light years away, and all the remaining heroes of earth trapped by Brainiac, inexplicably bound in stasis to earth’s Tree of Wisdom seed, that’s a big, big problem.

I’m not too uptight about the set-up generally. This is comics, there’s a lot of latitude, and as big concepts go this is a good one – I like the space gods and their World Trees. And, of course the Justice League is supposed to save the day, triumphing in the face of the unbelievable through heroism and teamwork.

And there are real strengths in the book besides:

As in last issue the scripting and character portrayals are excellent (even if Starro, Conquerer of Worlds, sounds a little too much like a criminal Don from Queens; even if Gar Logan seems a little bit too at ease teaming up with Deathstroke, of all people).

It was disappointing, and a shame to see, that Francis Manapul couldn’t maintain the pace to complete a full run of the series. Perhaps he’ll return next issue, but in the mean-time artist Riley Rossmo picks up the reins with solid work and Marcus To’s inks are, if anything, better than the previous issues.

And there are genuinely enjoyable plot developments and twists as the action barrels along. We even get to see Oliver Queen live up to a central heroic role, which is always good to see in an epic Justice League story. (Thanks for nothing Amanda Waller. When you gonna learn?)

But in order to make the shift from saving Colu to the finale of issue #4 on Earth, there are necessary stretches in the action that require quite a LOT of acceptance.

Frankly, I found myself raising my eyebrows just a few too many times for my taste. I won’t give away the specifics of what that entails. I’ll leave that to each reader to experience, and I’ll leave it to you to decide whether you’re happy to play along. Maybe what it involves won’t bother many of you. But if it does… well, anyway, you’re not alone.

I’ll end though, by saying this. A lot of what goes down is reminiscent of the halcyon days of early superhero comics where the purely unbelievable or absurd were much more commonplace – things like Superman pushing the moon out of orbit as a matter of course, or Wonder Woman owning an invisible jet for some reason, or a small boy stumbling into the greatest combined power of six gods in an old movie theater. (Where is Shazam anyway?)

I grant you, that all this is not really all that far removed from the stock and trade wonder stories of modern comics. And maybe the uber-retro is what modern readers really want from today’s comics. I’m won’t even say it can’t work. Grant Morrison did it with style in All-Star Superman.

Come to think of it, I seem to recall a mock-up of a newly christened Hall of Doom floating around out there recently. So maybe that’s just what DC is going for now. Maybe that’ll work.

I guess we’ll see. ‘Cause that’s what we’ve got.

Maybe just roll with it.