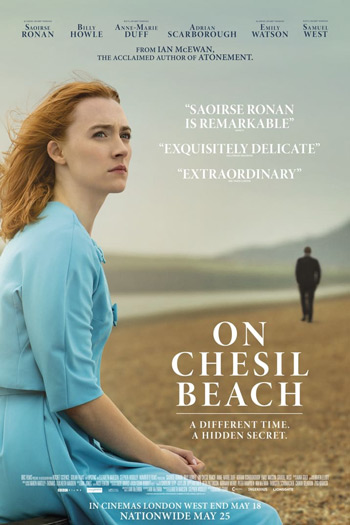 Entering the Independent Film Festival of Boston screening of On Chesil Beach with spotty recollections of the source material (a 2007 novella by Ian McEwan), it was easy to misremember the setting of the period drama — not the physical location, which is right there in the title, but rather the timeframe.

Yet this cinematic adaptation, rewritten for the screen by McEwan himself and directed by Dominic Cooke, isn’t set in some long-gone era of corsets and petticoats.  Instead, it begins in the early 1960s, just a stone’s throw from the onset of the sexual revolution, when Edward Mayhew, a bright working-class lad (Billy Howle, the U.K.’s answer to Timothy Olyphant) is so chuffed at receiving a first in history from University College that he blurts the news to the first person he can find who’s willing and able to appreciate the scope of the accomplishment.

That person turns out to be the reliably fantastic Saoirse Ronan as Florence, a refined, serious-minded upper-class music student anxious to escape the stifling Oxford home of her snobbish mother (Emily Watson) and bullying father (Samuel West).

Edward’s family is far more supportive, yet he’s equally anxious to start a new life away from the humble circumstances of his birth and the painful mental erosion of a mother (Anne-Marie Duff) suffering the consequences of an accidental head trauma.

Untethered from their respective backgrounds, however, it’s clear the couple brings out the best in one another and their chemistry is so visceral and specific that Edward’s father (Adrian Scarborough) speaks for the viewing audience when he pulls the boy aside and implores him to “Marry that girl.”

Edward takes the advice (and even a job with Florence’s awful father), but first the couple must navigate their wedding night, a minefield of expectations, misperceptions, physical reactions, and emotional triggers on both sides which the newlyweds can’t fully comprehend internally, let alone verbalize coherently in the heat of the moment.

And while some of the awkwardness provokes laughter, there’s also suspense and heartbreak in the characters’ simple yet potentially catastrophic inability to communicate:  a crucial failure to hear and be heard that rings especially timely in a contemporary society where important social conversations too often end in backlash, anger, and shame.

On Chesil Beach works despite its deceptively simple premise in part thanks to Cooke’s skill with pacing, tone, and general mise en scène, but mostly because the script and performances make us care enough about the characters and their futures to imbue what seems at first like a winking romantic comedy scenario with the uncertainty and dread of a psychological thriller.