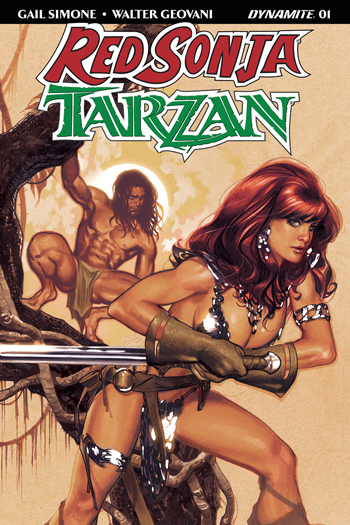 Tarzan and Red Sonja? In one comic book? Did anybody want this? Apparently so!

The good thing about this book is that it’s pretty well written!

But what did you expect when Gail Simone is at the helm?

The book starts off with a hunting party led by the evil Eson Duul.

Eson kills an animal without remorse in the opening scene. He has a villainous scene with his cohorts and thus, the book begins.

They realize that they have to team up to fight against Duul.

The whole thing moves pretty well. I’m not a huge fan of either of the characters, but I am a fan of Simone. She really knows how to compose a scene. The first Red Sonja scene especially was great. She goes into a town, finds a bar, and orders a drink. She takes the drink and pours it on her wound! Funny and well done.

The art by Geovani is pretty good too. These two are reunited after their work on Clean Room. This book isn’t my thing, but I still liked it enough. The Adam Hughes cover is a thing of beauty too wrapping the whole thing up in a nice package.