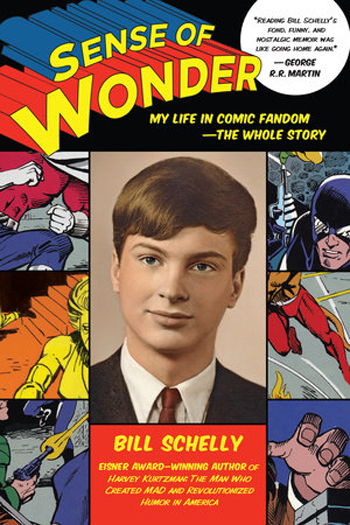 Sense of Wonder: My Life in Comic Fandom –
The Whole Story
By Bill Schelly
Published by North Atlantic Books
Released 4/17/18  / $19.95

Do you know the author, Bill Schelly?

If you do, did you know he was gay? I have a passing acquaintance with Bill online and have been a longtime fan of his comics fandom and comics industry-related books such as his recent Eisner-winning biography of Harvey Kurtzman, but I had absolutely NO idea he was gay!

And now that I know, big deal. Doesn’t affect my personal interactions with him one whit.

It does, however, completely change the feel of his autobiographical book about fandom, Sense of Wonder, now completely rewritten from its earlier edition.

Much of that rewriting is due to the fact that originally Bill still wasn’t willing to go public with his real self.

Sense of Wonder becomes a very different book now that it tells the tale not just of a nerdy comics-geek outcast who bonded with the other nerdy comics geek outcasts that made up early fandom but also of a young man who in some ways felt even more of an outcast on the inside.

Based on my own experience, Schelly will likely be surprised at just how many readers can relate to his life, be they gay, straight, or otherwise. I found this out when I chose to put my geeky high school diaries from the 1970s online nearly 10 years back, complete with all my angsty feelings of loneliness and isolation. I received hundreds of emails from all over the world from people who said they felt like they were reading about their own lives.

But this isn’t about me! Well, actually some parts of it kind of are. That’s my point. That’s the feeling I get right from the very first chapter of Sense of Wonder and many of you will, too!

It’s about a young boy discovering a lifelong love of the four-color medium, trying his best to find ways to contribute and become a part of it, meeting his idols, becoming a professional writer, and just trying to find some happiness in an increasingly hostile world.

As with all of his earlier works, Sense of Wonder is highly readable and well-paced. The early parts about Bill finding others who shared his love of comics, making his own homemade comics, and discovering fanzines, are other parts that just sound so familiar. The nostalgia factor is a big part of it. I was a few years behind him but I met or at least learned early on about many of the same folks he encountered such as Jerry Bails, Jim Shooter, Jeff Gelb, and G.B. Love.

I discovered comics fandom in 1972 when I was 13 years old and ran across my first fanzine in the basement of a bookstore. That fanzine had a free subscription ad for Alan Light’s Buyer’s Guide for Comics Fandom newspaper and I was off and running! I bought and ordered ‘zines on a regular basis for years after that, always trotting down to the corner grocery to get a money order.

This is where Bill’s story veers off from my own. Unlike me, he actually did contribute, becoming a fanzine publisher, writer, and artist, and even putting himself out there by showing his work to various pros to evaluate. This was something I was always too shy to ever do, particularly for fear it might be shot down as, in fact it WAS in his case.

From there, Bill drifted away from comics for a few years, again something I never did. By this point in his narrative, though, I’ve already bonded with his youthful memories so much that it’s like following an alternate version of myself down a different path in the multiverse.

From there, it’s uncharted territory as Bill grows up, moves on, meets new people outside comics fandom, comes to terms with his very private feelings, and begins adulting. For a while, anyway.

His discovery of silent comedy and writing about it with his Harry Langdon book is another relatable point. In my case, though, it was Buster Keaton and I never finished my book.

That’s where Bill found his niche. In articles and later books such as The Golden Age of Comics Fandom and Fandom’s Finest Comics, he celebrates the history of Fandom and all its amateur publishers and creators—the ones that made it big as well as the ones who didn’t. He was even the one who arranged for the great Fandom Reunion where old friends and fanzine acquaintances gathered, all covered here in Sense of Wonder.

If, like me, you’re anywhere near Bill’s age, Sense of Wonder will touch you on multiple levels. If you went through any of the behind the scenes stuff he had to go through, you’ll be able to relate there, too. If you just like reading a good, solid biography about an interesting person living through interesting times, this book imparts its own sense of wonder.

I’ve never actually met Bill Schelly but I hope I do someday. I feel like I really know him already.