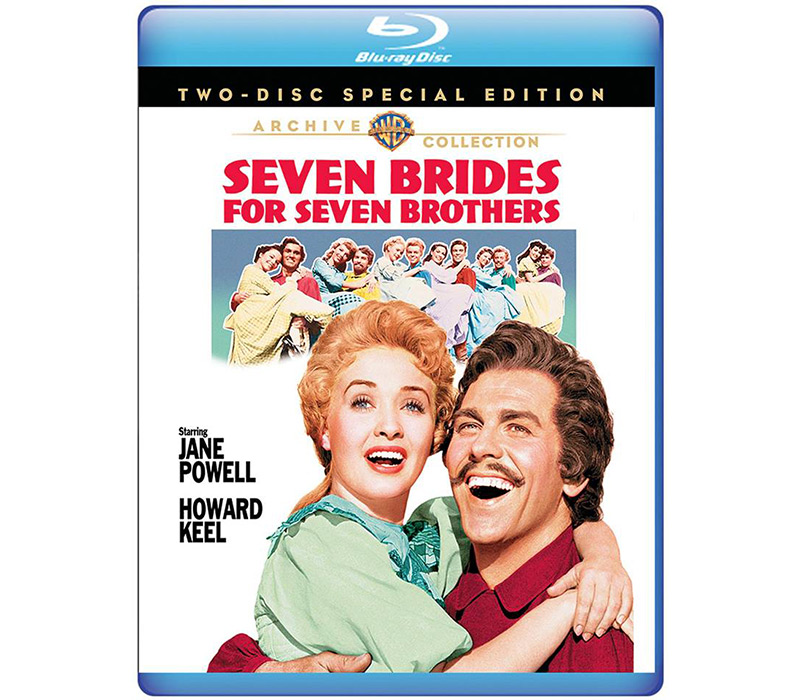 Get ready for one of the liveliest, leaping-est, sassiest and happiest musicals ever, as Warner Archive Collection proudly unveils its Two-Disc Special Edition Blu-ray release of the Oscar-winning 1954 MGM classic Seven Brides for Seven Brothers.

In Seven Brides for Seven Brothers, Adam (Howard Keel), the eldest of seven brothers, goes to town to get a wife. He convinces Milly (Jane Powell) to marry him that same day. After they return to his backwoods home she discovers he has six brothers — all living in his cabin. Milly sets out to reform the uncouth siblings, who are anxious to get wives of their own. Then, after reading about the Roman capture of the Sabine women, Adam develops an inspired solution to his brothers’ loneliness… kidnap the women they want from the surrounding villages.

Dismissed by studio executives during production as a ‘second-tier musical’, the film suffered budget cuts during production that precluded location shooting. Overcoming these circumstances, Seven Brides for Seven Brothers was an obvious hit in the making when previewed, and opened to great reviews at huge box office success at New York’s famed Radio City Music Hall. This film was so successful that it was theatrically re-issued for many years thereafter, and holds the achievement as one of the highest-grossing musicals ever produced by M-G-M’s “dream factory”. The unique story behind the making of the film is well chronicled by director Donen’s commentary, as well as the comprehensive documentary on the disc, hosted by star Howard Keel, and including interviews with co-stars Jane Powell, Tommy Rall, Russ Tamblyn, and Jacques d’Amboise, as well as director Donen, choreographer Kidd, and  Musical Supervisor Saul Chaplin (who earned an Oscar for his contribution), among others.

Directed by Stanley Donen (Singin’ in the Rain), and starring Jane Powell (Royal Wedding, Hit the Deck) and Howard Keel (Annie Get Your Gun, Kiss Me Kate), Seven Brides for Seven Brothers was nominated for four Academy Awards and won for Best Scoring of a Musical Picture. This Western musical is distinguished by a wonderful score of original songs by composer Gene de Paul and lyricist by Johnny Mercer (Li’l Abner) along with brilliant, acrobatic dancing scenes choreographed by Michael Kidd (The Band Wagon, Guys and Dolls).

Presented for the first time on Blu-ray, featuring a new 1080p HD master from a 2018 2K scan in its original 2.55 CinemaScope aspect ratio, with DTS-HD Master Audio 5.1 audio t (based on the original 4 track magnetic mix, but re-built from recording session masters and original stems), the Seven Brides for Seven Brothers Two-Disc Special Edition Blu-ray has extras to please every mountain man or woman, including the rarely-seen alternate widescreen (1.77 aspect ratio) alternate version presented for the first time in 1080p HD, a commentary from the film’s director Stanley Donen, a comprehensive cast & crew documentary, vintage featurettes including the famous “MGM Jubilee Overture” short (presented in its original CinemaScope 2.55 aspect ratio for the first time in 1080p HD with 5.1 DTS HD Master Audio sound), premiere newsreel footage and more.

Of note is that two versions of the film exist, one in CinemaScope and the other in traditional widescreen.  In 1953 when Cinemascope was brand new, MGM was concerned that if it was a fad they would have an unusable film in the long-run, so for protection they shot the film twice. Two different takes of each shot with different staging was filmed which reflect the different frame size of traditional widescreen (which is less wide and more rectangular) and CinemaScope. By the time the film was released, CinemaScope had proven a huge success and the alternate version was rarely seen until its release on DVD in 2004.

Available for Pre-Order now at the Warner Archive!