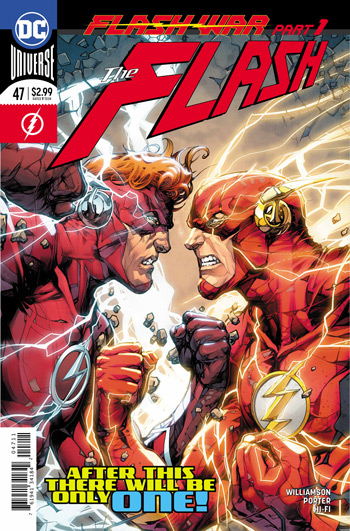 Flash War is here and the Rogues have been sent back in time to bring Wally back to the 25th century!

The Prelude to Flash War was in Flash Annual #1 which illustrated that post-Flashpoint, Wally has been a man out of time. He is plagued by his old life in Keystone City and violent memories of an unknown world to him. There are many Flashes in the current continuity, Original Recipe Barry Allen, The Wally West of Flash War and young Kid Flash Wallace Flash.

Flash War seems to want to resolve the anachronism of Wally being tortured by his past, but a jump forward in time might make things more difficult for the Speedster.

Hunter Zolomon plays the part of Zoom in this twisted tale.

On our Earth, Barry and Wally are bonding over the confusing state of affairs.

In the last issue, Wally sees The Flash Museum, but when Barry snaps him out of his projection, they see that there is no Flash Museum there…yet.

When the two Flashes return from a therapeutic run together to Iris’ garage they are thwarted by the 25th Century Reverse Flash Task Force with Commander Cold, Golden Guardian and more Rogues. Turns out, future Golden Guardian is a Yellow Lantern as the Rogues fight Team Flash! Wally and team are eventually transported back into the future to face trial in the Temporal Courts.

There is a reveal at the end that teases that this is all a ruse to get Wally back to the future but not for the reasons we think! Zoom has other plans, but are his plans all that sinister?

Joshua Williamson’s run on The Flash is impressive, and since Rebirth, aligns nicely in the DCU as nicely as it can appeal to fans of the TV show. The characters are more traditional DC but one thing consistent is the use of multiple versions of Flash, Zoom and others.

Flash War is off to a great start! You might be lost if picking up this issue, the Annual and the last few issues since around issue #40 are a good place to pick up from.