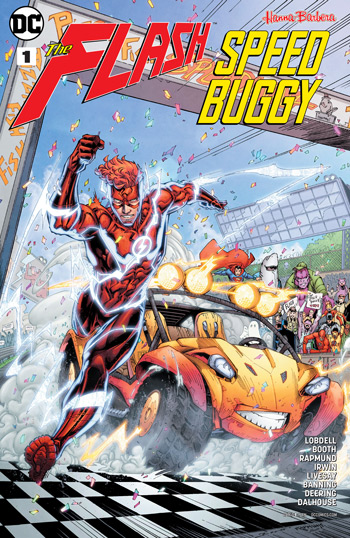 The new wave of DC/Hanna-Barbera crossovers benefits from having pairings that make a lot of sense.

Take, for example, the Flash and Speed Buggy.

Right away, it sounds good on paper, and Scott Lobdell and Brett Booth race with the idea to produce a fun (if somewhat nonsensical) story that not only provides an origin for Speed Buggy, but also ties it into the Speed Force.

Wally West crosses paths with Dr. M. Blanc (a reference to the voice actor behind Speed Buggy, Mel Blanc–though he’s best known as the voice of Bugs Bunny), one of the founders of S.T.A.R. Labs who is using his high-tech dune buggy to experiment with the Speed Force.

Their experiments lead them to run afoul of Savitar, who has his own automated automobile minions to pit against our heroes.

Andrew Dalhouse’s colors (with an assist from Pete Pantazis) give the work some extra zip. It’s nothing groundbreaking, but definitely a fun little diversion with lively art.