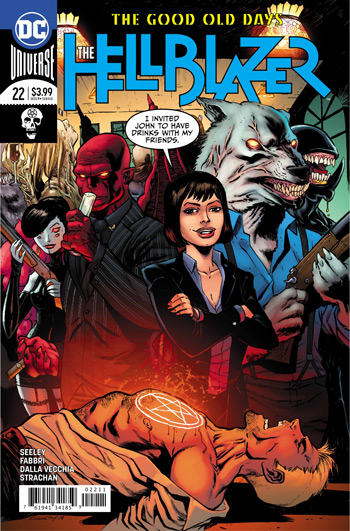 Oh, how the wicked have fallen.

Hellblazer used to be my favorite comic book. It was where top notch talent cut their teeth and honed their skills. It was a place of creativity! Horror! Powerful, evocative stories!

So, that’s why I’m so put off by this title as it presently stands.

It’s a toothless redo of something that didn’t need to change. John Constantine is a great character who hasn’t been used right in pretty much forever at this point.

In this issue, which is part four of a story called “The Good Old Days,” John is reunited with an ex girlfriend! And she’s possessed by a demon.

I stopped caring about page eight of this comic. Constantine has become a guest star in his own book. He barely does anything. Except look neutered.

Seeley doesn’t have a handle on the character so this falls short. I was bored until the “cliffhanger.”

Constantine doesn’t act like my Constantine that I love here. It’s like he’s been possessed too. And by a boring person.

The art is pretty good, but it doesn’t fit this title at all. I understand DC trying new things to get more interest in a character, but it doesn’t work. Again, Fabbri isn’t a bad artist, it just isn’t the right thing for this character.
I was bored and tuned out.

I have very strong feelings on how a Hellblazer comic should work. That’s just my genetic make up and others may like this book as it is now. I just don’t see how they could.