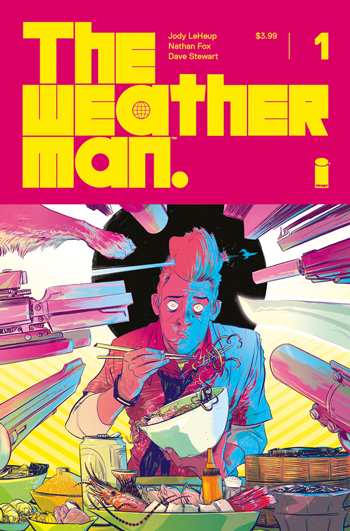 I have something to confess here: I’m an unabashed Nathan Fox fan.

There’s something about his art that is just awesome. I’ll pick up anything he draws. He reminds me of Riley Rossmo with how much energy his art gives off. He is perfectly suited for the concept of this book.

In this book, people have colonized Mars. It’s the year 2770 and life is futuristic!

One day, there is a big attack on Earth and it causes much havoc.

But who instigated this attack?

Well, they think they’ve figured it out.

It’s Nathan Bright, an amiable guy who is a weatherman! He is also suffering from amnesia.

Can Nathan be the one who really caused this horrible violence?

The book opens with a nice setup. The first pages seem to be the aforementioned attack from the stars that is about to happen.

Then, we meet Nathan Bright.

He’s full of life. He wakes up late and he and his dog just about make it to the station to do the weather with 30 seconds to spare.

Bright is a carefree sort and LeHeup just infused him with a likable and winning personality. It isn’t long before people start coming after him and he has to defend himself and while trying to figure out the truth!

Some of you might think this sounds like the film Total Recall. It’s reminiscent, but it’s something new and creative. The writing is awesome and the dialogue moves things along wonderfully.

And the art of course is wonderful. Fox is a veteran and his art is perfect for this. I just wish I had the rest of it right away (five issues are already reportedly done). If the rest of the series is this good, however, I won’t mind waiting.