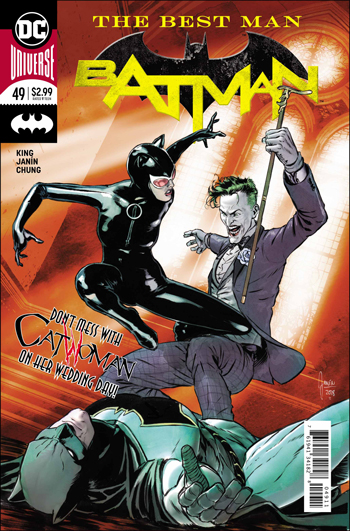 This is the conclusion of “The Best Man” storyline and it’s quite awesome. The issue opens with Catwoman and the Joker fighting.  Tom King starts the issue off with plenty of adrenaline and vigor!

But then, the issue takes a dark turn.

After a few pages of the fight, King cuts to the aftermath.

Catwoman and the Joker lay injured next to each other. So they have nothing else to do except talk. All while the Joker’s neck is slit and bleeding and the Catwoman is applying pressure on a bullet wound of her own.

In another writer’s hands this would have been incredibly boring.

Yet, King turns it to his advantage. The issue is funny, interesting and strangely moving. He takes these characters we have seen for forever and shows us new shades. It’s quite simply amazing and totally makes sense.

The best moment comes when The Joker and Catwoman talk about the wedding itself. Catwoman admits she stole her dress. The Joker insinuates Batman will be mad. He then asks what it looks like. She tells him.

He says “I hope I live long enough to see you in it.” Then, he corrects himself and says “I mean, buried in it. Obviously.”

It’s an off kilter and amazing moment that is strangely warm and works on another level. King is at the top of his game here.

The ending is so damn pointed and wonderful. This is the best Batman issue I have read from King. The art by Janin is fluid and expressive and I loved the way it ends.

This is a perfect issue and I will read this again and discover new things in it. It lives up to the hype and then some.