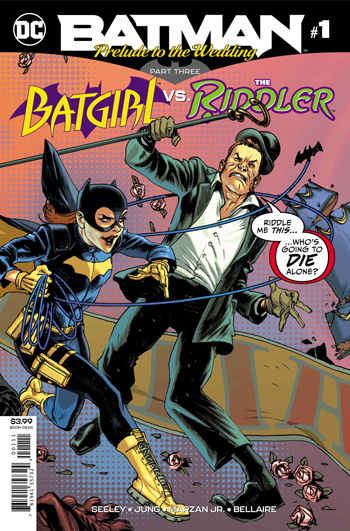 This is another of Tim Seeley’s Prelude books to Batman’s wedding.

After a decent enough first two parts, this one is the weakest.

Batgirl finds a walkman on a rooftop. She puts on the headphones. The Riddler starts up his game telling her he has come to Burnside!

It should be more exciting than it is.

Part of the problem is that Seeley doesn’t have a good handle on either The Riddler nor Batgirl.

Batgirl is put through all of the motions of a typical Riddler story. She goes through the clues which are surprisingly not complex. A grade schooler could have solved his puzzles. She runs afoul of some goons and makes short work of them. It’s like a step by step process of how to write a standard comic book story.

Then, the conclusion happens and it’s just trite.

The only line that made me stood up was when the Riddler says to Batgirl that he may come to love her. It was nicely placed and threw me off. Why couldn’t the rest of the issue be like that?

It’s literally an issue though that goes from point A to Point B and to Point C without many story beats. It ends with a “surprise” that doesn’t amount to much. Ah well.

The art is decent enough. I feel like Jung would produce nicer artwork with a better script. Seeley is writing all of these one shots. I hope he has better stories up his sleeve than this for future issues.