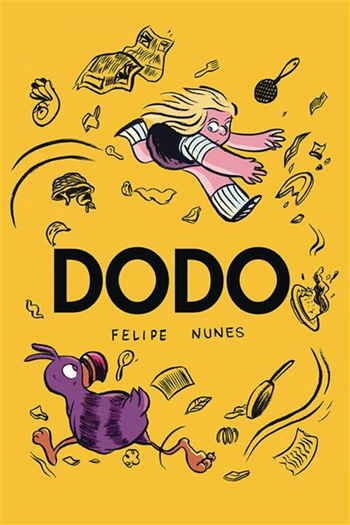 Dodo is yet another sideways glance at a Calvin and Hobbes type strip, this one a little more distanced than some, which works to its advantage.

Meet six-year-old Laila. Her day to day life has been upended and she isn’t at all happy about it. Over the course of the story, we piece together that her parents have recently separated. Their efforts to keep her out of that mess fail because they seem to have forgotten that Laila has ears and can hear all their yelling over the telephone.

It’s a complex story that affects so many families in the real world these days.

Like any imaginative six-year-old, Laila needs to step back and get away from it.

Ralph is an extinct Dodo bird. He is Hobbes in a maybe sorta kinda way. Ralph is real yet not real. He is a friend, an ear, but most of all a major distraction from Laila’s overwhelming and prevailing sadness.

Unfortunately, Ralph’s hobbies include destructive behavior and eating everything in sight. Laila’s even afraid he’ll eat her!

Felipe Nunes is the writer/artist here in this sensitive yet sometimes manic all ages story. I have no idea if he’s been through anything like this himself but he certainly “gets” it.

On the surface, it’s a story of Laila running behind Ralph cleaning up after his messes before he gets caught and cooked with potatoes. But on a deeper layer, it reveals the astonishing coping skills of children in the face of life disruptions they don’t and often can’t understand.

The artwork reminds me a bit of the late Richard Thompson, whose Cul de Sac newspaper strip certainly also showed a great empathy for the workings of the minds of children. As with a lot of recent projects, the coloring throughout the book adds tremendously to Dodo’s atmosphere, underscoring both how Laila feels and how the author wants the reader to feel.

And in the end, feels are what Dodo is really all about. Felipe Nunes knows them, revels in them, and projects them to the reader. Whether or not you’ve ever been in Laila’s situation, if you were ever a child, you’ll find yourself remembering, if only for a moment.